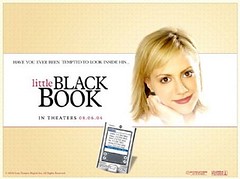 Aren’t we all tired of the same formulas churning out of chick flicks? Agreed, it serves a guaranteed purpose, but personally, on some days, I would like a film that swerves from the conventional ‘love conquers all’ motto. You can’t say if Little Black Book intends on being a satirical film on love, and you shouldn’t expect a cinematic gem out of this one - but it ends up putting a smile on your face because it allows you to relive those jealous, insecure moments of your relationship with absolutely no apologies.

Brittany Murphy was weird looking – she had a cute face, but bug-like eyes. It’s a pity she didn’t do any horror films in her time, bless her soul. She certainly had the eyes for it. And therefore, I had my reservations about seeing her in a chick flick. So I picked up a rarer film (she’s also done Uptown Girls and Clueless), because sometimes you can find the best performances in a film that many haven’t heard of.

Little Black Book traces Stacy Holt’s (Murphy) dream of being a TV anchor. She works as an associate producer on an unsuccessful show – and she has an insecure relationship. Perfect fodder for a witty but fairytale-ending chick flick, right?

Well, Little Black Book debases your expectations from the film – which is big win for me. But not in a manner that leaves you spellbound. We walk with Stacy as she spies on her commitment phobic boyfriend, by browsing through his Palm Pilot (Blackberry-type device). With a sloppy pace, we sift through Stacy’s insecurities as she meets with each of the ex-girlfriends and meticulously compares herself to them.

The funny element in the film enters here. Probably the strongest reason for you to pick up the DVD (if you’re in a Sex in The City kind of mood that is) is this entire theme of unapologetic insecurity. Murphy pulls it off perfectly and the credit goes entirely to her looks.

While she meets the girlfriends, there is an entire laugh-worthy voice over that dominates the film. It’s raw, unapologetic and director Nick Hurran does a great job of making the tone absolutely non-judgmental.

The DVD of the film has only one feature (among extended trailers and theatrical posters), a making of called "Live & On The Air: The Making of Little Black Book". It’s a fun, entertaining watch because there’s a 3-min interview with Murphy where she’s asked if she would indulge in this sort of snooping around.

Her calculated, diplomatic answers deliberately hide that tone of guilt which is exactly emblematic of the film. Little Black Book has the same kind of unabashed, satirical tone on self-righteous relationships in the eternal strife to be perfect. That way, the film is unlike most chick flicks. It almost promotes the snooping and the crazy neurotic behavior.

In 2009, Murphy died of a cardiac arrest and most remember her as the strangely petite looking girl from films like 8 Mile, or the commercial-singing freak from Clueless. However, it’s in Little Black Book that she seems unnervingly charming in all her self-talking, insecure honesty.

Little Black Book isn’t a great film; it has no real “story” which mostly overpowered by the need to make mush moments and be a winner among the chick flick lovers. We have flat performances; the side characters barely contribute, including the boyfriend Derek. But it’s in this sloppy film that you can see a sneaky, neurotic and underhand side to a relationship – a truly original interpretation of romance!