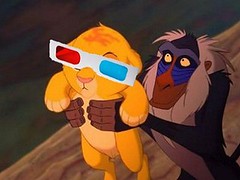 It’s a Disney classic; with traditional, hand drawn animation and good old motivational background music (given by Time Rice and Elton John). To release The Lion King in 3D is technological irony but it proves to be a decent effort, culminating the wholesome visual experience of 3D with a classic animated film. Watch the grander version of The Lion King if you’ve been a fan of the film, and run to theatres if you haven’t seen the film before!

The guy who sells 3D glasses at the ticket counter must be thanking his stars right now. Every Friday a new film is added to his list of 3D films – the demand is increasing. To him, it doesn’t matter that most films are not shot in 3D, hence they end up with projection problems, dim viewing due to the tint of the glasses, and not to mention a headache that most walk out with.

When news of The Lion King being released in 3D came around, there was panic. The original film released in 1994, uses traditional hand-drawn animation, which is 2D is nature. There was my childhood; virtually every moral lesson I imbibed, being re-released in 3D. Anybody would panic. But I had to watch it, it was a compulsive need – to compare and rant and crib about what the world had come to, in the name of commercialization (which is a bit hypocritical, I realized, because I owned every merchandise of the Lion King that existed.)

Viewing the movie, however, makes you forget all of that. The epic sense of the film comes thoroughly, with the 3 D version (provided the projection is up to mark) and because it offers a new dimension to viewing the film, the re-release works. However, the experience is only mildly different; if you’re a fan of things flying at you and the sense of grandeur that you would inevitably get with the 3D effect then, the 3D version will give you your money’s worth.

The Lion Kingis set in an anthropomorphic jungle in Africa called Pride Rock – where the royal family headed by King Mufasa is loved and respected by all. Life in the jungle is dutiful and simple and the movie begins with the birth of Mufasa’s son Simba. The family’s rival, Scar (also Mufasa’s brother) is constantly trying to overpower him to become the king. The film traces their story – of love, betrayal and honour.

For those of you who have already watched the film many times over, the same points will make you cry, Scar and the hyenas will still manage to scare you, Simba and Nala’s growing love over Elton John’s classic ‘Can You Feel The Love Tonight’ will still make you smile with fondness and you will still feel a void when you walk out of the movies – at the end of the 2 most precious hours of nostalgia.

Funnily enough, the voice-overs of side characters include familiar names like Rowan Atkinson (voice of Zazu, Mufasa’s right hand) and Whoopi Goldberg (voice of the female hyena in Scar’s army) and the background score is given by Hans Zimmer. Elton John and Time Rice have written and composed 5 songs in films – all of which have been re-touched and performed countless times at Broadway and live concerts. It would take you an entire day to listen to the various versions of the songs.

For many (including me)The Lion King being released in 3D was essentially a revisit to our childhood - of days when Disney was about 2D animation and classic cartoons, and a time when we hadn’t heard of Hanna Montana or The High School Musical trilogy.

Re-releasing the film in 3D, undoubtedly gives you that added advantage of watching the film on the big screen with effects and wholesome viewing experience. Otherwise, The Lion Kingin 3D includes your favorite moments, your favorite characters and another excuse to watch your favorite film, regardless of the visual dimension

Yay! Thumbs Up, by Convertus : reminiscent for those born in the 80s and the 90s

Thanks for the review. Will watch it with kinds, its been a long time since we have watched a movie together.