wogma rating: Watch for sure, preferably in theatre (?)

Both Jurassic World: Dominion and Pixar’s latest film, Lightyear, are movies that will make a lot of money regardless of how good they are. They don’t need to have good stories as long as they do the bare minimum to deliver on their one selling point—reminders of legendary movies that already have dedicated fanbases. Every year, there are at least three movies that follow this route—huge budgets, pre-existing fandom, and zero need for a story.

It doesn’t play with expectations that come with a genre, but it plays to them well, enhancing them ever so little, enough to keep you entertained.

Dominion conducts its business in a way that makes you want to stop watching it and put on the 1993 classic instead.

Lightyear chooses to forgo that in favour of doing something revolutionary: telling a story… all by itself.

Lightyear is, at the same time, a celebration of the science fiction genre, a reminder of the magic of Toy Story, and a solid science fiction story in its own regard. It is a glowing example of what filmmaking can accomplish only by following the basic rules of storytelling. It uses a time-tested formula without feeling formulaic. It weaponizes long-loved tropes of science fiction and the fanbase that Toy Story has accrued, to sell you a well-executed by-the-numbers “teamwork-makes-the-dream-work” story.

In an age of sprawling cinematic universes coasting on the popularity of A- movies, Lightyear is a strong A. It uses the attachment to better movies as a pole-vault to situate itself in the animation sci-fi canon. In an age where every mainstream movie relies on the viewer having watched and enjoyed seven others, Lightyear stands tall, providing satisfying entertainment in one. 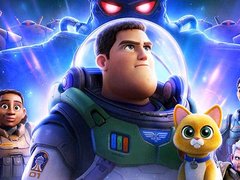 It is true that the movie follows a formula. Every Creative Writing rule that I’ve heard of, has been followed here to the letter. Stories walk a fine line when following rules—they run the risk of being predictable. But even though I knew all the rules, their execution surprised me a few times. In the end, that’s what stories are meant to do—surprise, excite, and invigorate. This movie does all three, albeit to a lesser extent than some of Pixar’s other work. It doesn’t play with expectations that come with a genre, but it plays to them well, enhancing them ever so little, enough to keep you entertained.

Lightyear is a joy to watch not only because of the storytelling, but also because of the painstaking animation of the magicians at Pixar. Talent and love pour out of every frame. The camera flies around the digital space in a more thrilling way than I’ve seen for a while. If you are willing and able, please watch this movie in the full IMAX.

This review is by guest reviewer Arsh Kabra. He is an English and Creative Writing student at Ashoka University. This is really enabling his vindictive attitude towards movies. Arsh Kabra also blogs at http://abu.smritiweb.com/.

Welcome aboard Arsh... Well written review. All the best

Raj has given this movie a Want to Watch(Yay.. Yay..!). Raj has posted 81 comments and has rated 49 movies. See Raj's page for more details.