Lovers of indie cinema and fans of Nawazuddin Siddiqui should watch it if they have nothing else on their mind and are willing to put an effort.

Another one from the Netflix catalogue, Liar's Dice is written and directed by Geetu Mohandas, who has earlier also acted in several Malayali films. The film is partially set in a remote village of Himachal Pradesh, Chitkul, and it intrigued me that a director from Kerala came to situate her debut Hindi film so far off, and that too with such nuance and conviction that it won two national awards in 2014 -- best cinematography and best female actor. Not just that, it was also India's official submission for the 87th Academy Awards in Best Foreign Language Film category. Later, I learned from an interview that Chitkul was, in fact, a suggestion made by the film's cinematographer Rajeev Ravi (Chandni Bar*, Dev D, Udta Punjab.

The ending is impactful and leaves you concerned, boggled and immersed in thoughts.

Mohandas uses both his suggestion as well his craft to her advantage. Cinematography becomes a great hook to begin with. A nicely framed abstract starting shot opens the film. It is abstract in that it is not connected to the story, as much as it is connected to the place, but it casts a strong, puzzling foreshadow. It's almost like a harbinger of times to come, events to unfold. This shot is followed by a slow paced montage of snow clad mountains framed by vernacular architecture, which plants you into this breathtakingly scenic village, and lets you soak the aura before you get entangled in the story. It also sets the pace of the film. Slow.

The other strong anchor of the film is its beautiful, nimble but frayed female lead, Kamala, played by Geetanjali Thapa. Through her appearance and expressions, Thapa is able to remarkably convey a range of emotions with ease - uncertainty, vulnerability, helplessness, suspicion, determination, and courage. This isn't a dialogue-heavy film, so most acting is subtle, and Thapa excels.

Yet another favourable point is the presence of Mr Nawazuddin Siddiqui in a major role. With beauty, poignancy and talent thus stamped all over it, Liar's Dice makes a promising start. However, as it leaves Chitkul, it gradually loses steam and becomes cumbersome to watch. Content-wise, there's slowness in the development of events, repeatedness in the nature of interactions between the characters, and a prevailing sense of futility of it all.

Technique-wise, all this is caught on camera at an unusual frame rate - I am guessing 30fps, which is higher than the conventional 24 or 25 fps. Due to this, most of the middle portion of the film loses cinematic appeal and beauty that was promised at the start. Together, the shortcomings of pacing and ill-effects of adopted frame rate make it difficult to retain interest. 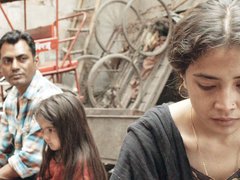 But wait you must, if you can, because, well, it is worth it. The ending is impactful and leaves you concerned, boggled and immersed in thoughts. It thematically links back to where it started but leaves some aspects unresolved, causing its inherent sense of foreboding to linger and haunt you. This, to my mind, is a good thing. I have always enjoyed being jolted by movies and remaining absorbed in a film after it gets over. But will you? In this case, I can't say.

I have never been more unsure of recommending a film. On one hand is the rarity of distribution of this film, plus all the accolades it had gathered. On the other is the need for audience engagement. Depending on what you weigh more, you may or may not watch it. Lovers of indie cinema and fans of Nawazuddin Siddiqui should watch it if they have nothing else on their mind and are willing to put an effort.