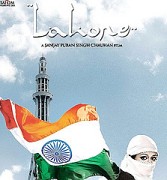 Same old need for sisterhood between two countries which have been at war for what, 6 decades now? Of course, we need truce but not sure if we need a movie on the issue with the backdrop of a sport that seems to mean more war than anything else.

Most of the sports-themed films I've seen have been based on a sport that I've enjoyed watching, at least a bit. I always wondered how differently the film would appeal to a person who is not interested in the sport, or doesn't know the rules. Today, I was a part of that audience. It is difficult to say if I didn't enjoy the film because I don't like the sport one bit or it was a not-so well made film.

My problem with boxing - any kind - is not only that it is a brutal game but also it seemed like the wrong one to pick for a theme of peace. I know, it can be argued that the irony was the whole point of the film. But, that didn't go down well with me, at all.

I can imagine why the film was banned in Pakistan. I'm sure we'd have a furor here if we as a country were shown as evil, manipulative and cheaters. And to top it off, if that same film had all Pakistanis doing the right thing at the right time. Also, how much sense does it make to show individuals from each country hating the other while the government is using its machinery to end the war. Maybe it's closer to truth. Scary but I still don't see how this helps the process of peace.

The film in itself has a very standard story. You win some, you lose some. You drive home a point. I actually liked the way in which the conflict was resolved, as a concept. But, the way in which it was done, the bulk character transformations just were too much to gulp down.

As a far-fetched possibility, the character conversions would have worked had the actors done a half-way decent job with their acting. Interestingly, Aanahad was good with the growling during his boxing games as compared to the stone-face and body he carried even when he was supposedly being playful. Some of the most awful dialogue delivery possible. And what can be done when the only inspiration around seems to be Nafisa Ali. Sushant Singh, Farookh Shaikh and Saurabh Shukla are good in their support roles but can't make up for the expressionless cast around.

So, the theme didn't appeal to me, the performances had nothing to hold my interest. The only thing that worked for me was the camerawork. It really accentuated the well-choreographed action sequences. How true they were to the game, I wouldn't be able to tell.

A slow narrative of how a family hurt by a person from another country deals with the situation. It uses the usual means, no new moves. And I don't see why that should engage, educate, entertain?

Thumbs up, by Taran Adarsh, Bollywood Hungama : ...The highpoint of the film are the kick-boxing duels... full review

Thumbs up, by Martin D'Souza, Glamsham.com : ...Newcomer Aanaahad has a tailor-made role that is sure to get him rave reviews. A super debut with a killer kick.... full review

Thumbs up, Movie Talkies : ... The underlying message of the film is quite telling as it addresses the need of the hour, which is peace and friendship between two nations.... full review

Thumbs up, by Sampurn, real bollywoood : ...Sanjay Puran Singh Chauhan has woven a tight screenplay never once deviating his story’s main focus to anything else.... full review

Thumbs up, by K K Rai, STARDUST : ...Farooque Shaikh, the veteran bollywood actor who enacts the part of coach in the film, has come out with one of his best performances. ... full review

Thumbs up, by Nikhat Kazmi, Times of India : ...the film does not strike a jingoistic note, despite tracing the entire trajectory of the tumultuous Indo-Pak relationship through the aggressive sport of kickboxing.... full review

So-So, by The Narcissist, Cinemaa Online : ...Worth a big screen watch but not a great movie... full review

So-So, by Arun Janardhan, Live Mint : ...Held together by competent cinematography (Neelaabh Kaul), realistic action sequences and excellent sound editing, the film is, however, a let-down in a number of areas. ... full review

So-So, by Subhash K Jha, Now Running.com : ...It's in the kickboxing scenes that the film exudes blood, sweat and tears. ... full review

So-So, by Khalid Mohamed, Passion for Cinema : ...the film’s look is grittily styled (except for some unnecessary, cheesy special effects), and the sound design’s crisp. The editing and the music score are serviceable.... full review

So-So, by K N Gupta, SmasHits.com : ...Fortunately, 'Lahore' is free from any anti-Pakistan theme even as it dwells on the rhetorical Indo-Pak hostility depicted through the kickboxing theme.... full review

Thumbs down, by Bobby Sing, Bobby Talks Cinema.com : ...till the movie reaches its climax, you keep wondering why it was showered all that appreciation in the festival circuit... full review

Thumbs down, by Deepa Gahlot, cinemaah : ...But it’s still puzzling why Warners chose to associate with this film, and how a large cast of credible, if not A-list, character actors (Ashish Vidyarthi, Nirmal Pandey, Surabh Shukla too) signed up for it... full review

Thumbs down, by SpiceZee Bureau, Zee News : ...he film’s editing is commendable and cinematography is noteworthy especially in the boxing sequences. ... full review

Nay! Thumbs Down, by Keri