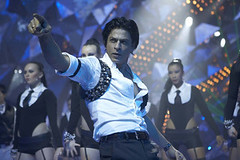 Sarcastic spewing on the state of the nation, comic timing and peppy item numbers by the reigning "stars" provide a few select moments of entertainment. Other than that, vanilla slapstick is what it is.

NOT A REVIEW - just my take on pre-release takes of others...

The four characters of Krazzy 4 are described as "Crazy for anger", "Crazy for cleanliness", "Crazy for freedom" and at this point they lost interest in looking for things that a person could be crazy "for", so they came up with the brilliant..."Simply crazy". Now before I am labeled as "Crazy for English" or much worse "Crazy for Sanity in Indian cinema", let's move on to what other people think.

Speaking of crazy people becoming a source of entertainment to the non-crazy population, A mother in India is offended by the trivialized portrayal of a cruel and devastating illness. In her blog, she talks about her experiences and challenges in getting help for her daughter who has been diagnosed with schizophrenia.

Sensitivity has never been our strong point, especially in the slapstick genre. Whether it be mental illnesses or using homosexuality as a subject of rude and crude humor. Being closely associated with 2-3 people suffering from schizophrenia, I completely empathize with "A mother in India". These people are already heavily marginalized and are extremely low on confidence, do they really need us to laugh at them?

So, let's see what the Bollywood Czar has to say about his latest production.

I promise to reserve judgement till after I have seen the movie. Maybe we will be pleasantly surprised and we will be laughing with the Krazzy 4 and not at them.

BUT and a big BUT (just incase you didn’t notice)

So-So, by Taran Adarsh, IndiaFM : ...Ashwani Dhir's screenplay may lack novelty, but the dialogues penned by him are witty and enjoyable2... full review

So-So, by Ashok Nayak, Now Running.com : ...The major problem with Krazzy 4 is the script. The first half is enjoyable, but it's the second half that disappoints. The climax isn't convincing either.... full review

So-So, SearchIndia.com : ...One of the more tolerable comedies emerging out of the Bollywood cesspool... full review

So-So, by Sonia Chopra, Sify Movies : ...This film must have been funny on paper, but it’s the actors that make it so watchable... full review

Thumbs down, by Naresh Kumar Deoshi, Apun Ka Choice : ...At best, the movie has only a few flashes of good comedy coupled with a gentle dose of patriotism... full review

Thumbs down, by Tajpal Rathore, BBC : ... HINGES ON A PARADOX THAT BORDERS ON LUNACY... full review

Thumbs down, by Sanjay Ram, Business of Cinema : ...It's a pity that the stellar cast and producer having such an amazing track record behind them indulge in a film such as this... full review

Thumbs down, by Deep, Deep's Home : ...Not a good mix of emotions with comedy again... full review

Thumbs down, by Martin D'Souza, Glamsham.com : ...Performance wise, none stand out; the poor script does not allow them to. So the only interest remains the ‘Special dances’ of Shah Rukh Khan and Hrithik Roshan.... full review

Thumbs down, by Khalid Mohamed, Hindustan Times : ...So do you regret seeing this movie? From now on I’m spelling my name Kkkhalllid. Could luck out then and avoid such moviezzzz.... full review

Thumbs down, by Rajeev Masand, IBN Live : ...Didn't anyone concerned with the film notice that the script is incoherent?... full review

Thumbs down, by Amit R Agarwal, merinews : ...though with its fair share of moments, doesn’t have meat enough to sustain viewers for even two hours... full review

Thumbs down, by Gloria D'Souza, merinews : ...the movie is not up to the expectations... full review

Thumbs down, by Vijay, MovieWalah : ...The director has tried to show more than he could handle.... full review

Thumbs down, by Anupama Chopra, NDTV : ...Dream Team itself wasn't particularly sparkling and this copy is watered down even more by songs and strained sentimentality.... full review

Thumbs down, by Raja Sen, Rediff : ...There's nothing offensively 'wrong' with Krazzy 4, especially compared to the atrocities served up nowadays... full review

It's Krazzy-4's day out from the mental asylum they are being treated at. They find out that it's a mad mad world out there.

Guys, 10 minutes into the movie, I gave up on taking notes on this one. When a movie starts with naming mental diseases that were supposed to make people laugh, what more can you say?

The film is about four mentally unstable people who escape from the mental hospital in order to explore the world. I hope that it’ll take a good position in bollywood box-office

Hey..u got Bollywood Czar quote wrong. Allow me to put the correct quote for ur reference.. "The idea of the story came to me almost 8 to 10 years ago…after observing the movie The Dream Team. Jaideep Sen was sitting close to me at time. This happened whilst making Koi…mil gaya and Krrish, I wanted to give him a break as an independent director and decided that he had the right sensibility to copy a movie and would not go over the top telling people that it's a ripped off movie. Hence he's directing Krazzy 4…
and finally

"In keeping with the Filmkraft ethos, Krazzy 4, too is not your usual run-of-the-mill film. In fact it's much much worse than that"

Hope this clears up the matters :)

:D Have you seen the movie already, Sudhir?