Kochadaiiyaan, hailed as 'India's first photo-realistic performance capture film', is a sore disappointment primarily because of the poor quality of animation and VFX. A potentially interesting story and the presence of Superstar Rajnikanth all but go to waste in this brave but failed effort.

If you watch Kochadaiiyaan, before and after the actual film, you'll see snippets of how this film was made - how the cast had to wear special suits meant for performance capture, how they had nothing to react to in terms of their environment and surroundings. It reminds you just how tough filmmaking is. It also inspires awe for actors like Superstar Rajnikanth, who are willing to embrace new technology and go the distance in order to narrate a story that they believe in. Unfortunately, these 'making-of' segments are also the only things truly worth watching in Kochadaiiyaan.

The culprit, not surprisingly, is the quality of the animation and visual effects. Stilted human figures, lifeless textures on the environment, unrealistic camera movements, and so many more; Kochadaiiyaan is a thorough visual disappointment. Of course, those comparing this film with the likes of a big Hollywood summer blockbuster must know that the entire budget of Kochadaiiyaan would be a fraction of how much it would cost just to get Hugh Jackman for X-Men: Days of Future Past. Still, that doesn't ease the disappointment.

A pity, really, because the story, though not truly out of the ordinary, had enough meat in it to make for a fun watch. Two warring kingdoms battling the ghosts of the past and the threats of the future, as one hero straddles the burdens of history, loss, deception and love. It had all the makings of a bit of a minor epic, to be honest. 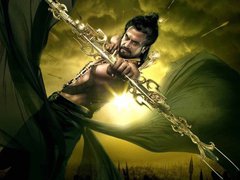 Unfortunately, apart from the visual let-down, the film also suffers from mediocre music by A. R. Rahman, and a rather placid screenplay. The twists never really grab at you, and you always wait for at least a glimpse of Thalaivar - the real one - he who makes you believe in the impossible; but it never happens.

He has a flourish or two here and there, and he also gets to rattle a few dialogues (including some self-referencing I suspect, if you watch the film in Tamil) but you always miss him. Fact is, there's just one of him in flesh and blood, and no amount of technology can change that. Of course, there are so many shots in the film which just couldn't have been executed in live-action - Rajnikanth's entry, for instance. Alas!

Soundarya Rajnikanth Ashwin must surely be lauded for the brave attempt, but Kochadaiiyaan deserved to either be as good as the best performance-capture animated film ever, or it deserved to have not been made at all. This technically shoddy film that has come out of the attempt does justice to neither Thalaivar nor his fans. And what they've made of gorgeous Deepika Padukone's face added travesty. That is the sad truth of it.

Want to Watch, by TimELiebe : Worth checking out maybe…?

What? No review as yet?

How should one interpret it-
shows are so jam packed that you did not manage to get a seat
OR
it is not a film very high in your priority list?

with that as the message Rajni Rana Kochadaiiyaan delivers his (daughter's) path breaking magnum opus.

Coming straight to the technology: the animation is top class quality for the budget. No two doubts.

cinematography, if I could call it that for an animation film, is exceptional. A visual splendour. The freedom in camera movement granted due to the fact that it's an animation and not a real life shot film is superbly used.

story and execution are good. A clean family values oriented film after ages.

The less good side, weakness of the technology to not show facial expressions to their fullest. Even Steven Spielberg's Tintin suffered from it. So could not blame Rajni or Soundarya.

music from Rehman is in line with the time period that the movie is set in. Lyrics are superb.

all in all: good film. To be applauded for the pioneering technology and for the courage to make a sex-free item-song free film in 2014.

I almost want to see it just to see if it's as disappointing as you say….

@Fan Sorry for the delay. I didn't watch it so that Pradeep could watch the Tamil version and write the review.

@TimELiebe must admire your patience. :P

@TimELiebe Good luck for when you watch it. :D