Sometimes even unrefined films can leave you engrossed, regardless of their errors or technical inferiorities. This one is surely one of them. It makes you contemplate. But above all, the experiment grips you throughout.

A thing with some social issue-driven films, which I hate particularly, is that they think they can demand sympathy and get away with their flaws in the name of the said cause. However, at times wonders happen – wonders which engross you through and through, wonders which express angst, pain without being dramatic. Khwada does that or perhaps even more. Raw, minimalistic, unconventional and straightforward on the face of it, yet effortless, engaging, thought-provoking and witty, the film is both a rare and difficult combination. Rare because very few get it so well, and difficult because it has strong chances of being labelled as either experimental or unprofitable, or both. Whatever the future holds, it marks a fairly decent debut, even so with blemishes that accompany it.

A family of shepherds forced to migrate in search of a steady life doesn’t sound like a story told for the first time, nor is it the first to address the cause. But the moment you know how well they earn for themselves, you start sensing the difference. Given the interrelation between regional settings and poverty in our films, this one steps up its realism beyond conventional norms.

However, having perfect characters is like hitting a bottleneck. No wonder you see their flaws or weaknesses generating ample conflict. They are homeless, strong-willed, but powerless against a system. Scapegoats of government policies, they desire dignified living in unstable times. Staying true to its essence, Khwada illustrates obstacles in life and the never-ending journey that ensues. Thankfully though, the subject doesn’t stand in the way of the narrative. 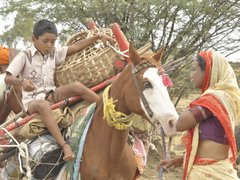 If breaking down in one line, Khwada basically sums up as a good-versus-bad film with a difference. It follows an uncluttered format or no format at all. You witness hinterlands of rural Maharashtra. You see characters wandering with their livestock slowly and steadily, so much slow that you get enough time to brace yourself. In the absence of a standard plot, some beautifully-written elements unify as events which, in turn, help shape the bigger story. The pace at which both characters and events unfold befits the flow. This very much reveals Bhaurao Karhade’s familiarity with the topic and his understanding of screenwriting. His familiarity with relationships, psyches, backdrop, politics reflect well through his writing and to some extent on screen as well. He does whatever he could in his other task, pulling off a slew of noteworthy moments. That said, his inexperience does create a contrasting picture otherwise. Certain mannerisms emerge as staged. The good part is that these imperfections are not quite noticeable and you remain with the story.

The visual beauty of this film dwells in its rawness, with each shot trying to create the unrest and act as a distinct character. But what I liked more is that the photography doesn’t hinder the storytelling. For a major part, a conscious effort is taken in order to make the film look dull, tedious. Camera tries to impart characters’ strain visually and you don’t even realise that for a long period. Perhaps due to the obstacles faced during the making, you end up seeing a few discontinuities from camera’s perspective to that of director’s. Despite the lack of resources at their disposal and some technical downsides, it deserves all the praise it has been garnering all the while.

One thing that can perhaps defy one’s cinematic senses or disappoint entirely is its treatment. A well-conceived approach, calling it non-dramatic would be an understatement. A story of this nature sans classic drama could seem stale, but not in this film. Now what is drama and what isn’t is quite subjective, Khwada shatters our perception of it. In the age of musical overflow, at times you listen to nothing more than a low-pitched background score. But the absence of sound in the climax reaps the rewards. This is certainly not the first of its kind, but it’s good to see it used here.

I generally refrain myself from festival-film or art house or masala to describe films. I would instead like to put Khwada as another good film. The film has enough potential on hold its own.