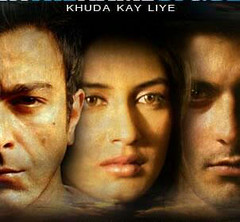 Fanaticsm, racial profiling, feminism, generation gap, lost identities of people moving from the East to the West - Khuda Ke Liye covers it all with a good forceful impact in the end.

NOT A REVIEW - just some thoughts from a quick look-up on the internet...

For movie-lovers, just the fact that Khuda Kay Liye - a Pakistani movie - has found its way into theaters in India is a good enough reason to rejoice. This is certainly a move in the right direction with other internationally acclaimed movies (Lives of Others, 4 months, 3 weeks, 2 days) being screened in mainstream cinema halls. I am sure they wont find an audience in the interiors, but well-begun is half-done, right?

Hope to catch it soon...

I can't decide what moved me more. The way in which the author's take on Islam - the use and abuse of the religion - unfolded, or that someone even dared to touch upon it so openly in the first place, that too in Pakistan. I think there would be very few makers for this kind of a story even in India - a secular state.

And by the climax, I was amazed at the number of issues Khuda Kay Liye touched upon. We had the whole gamut. Atrocities faced by women at the hands of fellow-Muslims, double standards of Muslim parents living abroad (I have seen this with non-Muslim Indians too), injustice disseminated because of racial profiling, Jihadi's misuse of easily-influenced-relatively-meek youngsters to turn them into terrorists. Each problem is given its own space to breathe and develop.

The parallels drawn between the racial profiling storyline based out of Chicago and all the other things happening in Pakistan were amazing. There are points where you can interchange the US law officials with the Jihadi leaders in terms of their unyielding attitude towards whatever they believe is the truth. How they all mince words to have people say what they want to listen to. And to make sure the audience doesn't miss the parallels, the similarities are directly shown towards the climax.

The strong and clever dialogues had a huge role to play in the overall impact In the name of Godhad. I was wondering how much more effect it would have had on me had I understood the language completely. The use of Urdu is elegant, and at the same time not entirely overwhelming. Since the movie is more or less situation-driven you can make a fair guess from the context.

However, there was a lack of the same aptitude in the departments other than story and dialogue. In particular, the editing was very abrupt and didn't render a smooth flow. The only exception was in the climax scene in the courtroom, where the cuts worked towards narrating the story. Similarly, while the songs were beautiful, the shifts in and out of western classical in the background music seemed pretty random.

Most of the actors too came across as very stiff. Only, Shan (Mansoor) stood out with an excellent performance - from the inspired musician to a completely broken down man. Fawad Khan who played a confused youngster, Sarmad, did look aptly baffled. So it would be too soon to judge whether he can really enact other emotions.

But, given the strength of the message all these shortcomings seem pardonable. The questions that I am left with are - Has it reached the right ears? Or at the very least have the people sitting on the fence convinced to keep from committing such heinous acts?

Thumbs up, by Subhash K Jha, All Bollywood : ..."Khuda Kay Liye" also focuses on what being a modern Muslim really means in Pakistan... full review

Thumbs up, by Nikhil Kumar, Apun Ka Choice : ...in the end comes a courtroom drama that questions the distorted view of Islam propagated by the radicals.... full review

Thumbs up, by Khalid Mohamed, Hindustan Times : ...As the plot unfolds, you do feel cluttered with far too many characters, too many time jumps and several awkwardly shot scenes... full review

Thumbs up, by Rajeev Masand, IBN Live : ...Despite its obvious flaws — which includes some amateurish acting, modest production values for a film of this scale, and more than a few creative liberties in the plot — Khuda Kay Liye is still an immensely engaging film because it's made from the heart.... full review

Thumbs up, by Anupama Chopra, NDTV : ...The film has its share of flaws. Some scenes are amateurish and overtly simplistic. Many questions are left conveniently unanswered... full review

Thumbs up, by Syed Firdaus Ashraf, Rediff : ...Unfortunately, the film falls short of good performances, except from the lead couple, Shaan and Iman Ali.... full review

Thumbs up, by Saakshi Juneja, To Each Its Own : ...there are certain creations who manage to touch a chord deep within irrespective of genre, language, personal likes/dislikes, etc etc.... full review

So-So, by Jahan Bakshi, Now Running.com : ...Iman Ali, who plays Miriam, is also the only actor who manages to leave an impression... full review

Thumbs down, by Bikas Mishra, DearCinema : ...The film attempts to initiate a dialogue on the perception of Islam both within and outside Pakistan.... full review

Yay! Thumbs Up, by Last Longer In Bed : Great.

Two musically gifted brothers, Mansoor and Sarmad, come from a non-conservative Muslim family. Mansoor heads off to the US and Sarmad wants to follow the Jihadi's interpretation of Islam. Both of them suffer at the hands of people whose ears are closed to beliefs other than their own.

Fanaticsm, racial profiling, feminism, generation gap, lost identities of people moving from the East to the West - Khuda Ke Liye covers it all with a good forceful impact in the end....

[...] the details meetu scribbled while watching the movie - this may include spoilers. This review was also published on meetu’s [...]

[...] is impressed by the powerful story and message of Khuda ke liye. And by the climax, I was amazed at the number of issues Khuda Kay Liye touched upon. We had the [...]

To Each Its Own &raquo; Archives &raquo; Khuda Ke

Good message, but the screenplay is overburdened with too many complexities, social and religious. Was it necessary to tackle all the problems in one single movie? The editing and the delivery were not seamless. I feel the best part of the movie was Naseeruddin Shah's dialogues and the message he provides. Its a 6.5 on 10 for me.

This movie is absolutely wonderful.Thnak you!

u have great site
watch tron legacy
it is good movie

shaizal has given this movie a Yay! Thumbs Up(100). shaizal has posted 1 comments and has rated 1 movies. See shaizal's page for more details.