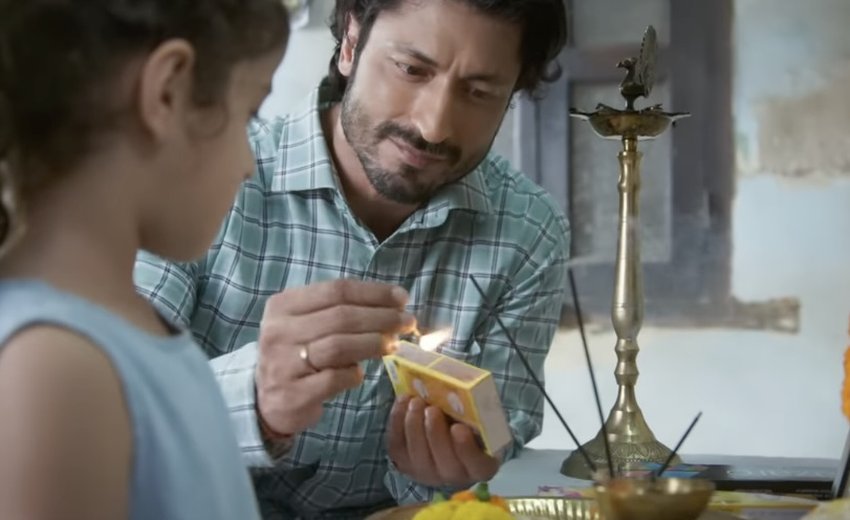 The film’s title intrigued me so much that I had to watch it. Three languages are used with no seemingly obvious connection between the three phrases used. I intentionally avoided the trailer, willing to be surprised by whatever came my way. And boy, was I taken aback. Sure, the topic at hand is disturbing, and the violence has shock value. But the one-line plot, “What if a simple, kind man is pushed over the edge by the system?” takes the protagonist from one extreme to another with some shoddy, half-hearted transition in character.

As an audience, I felt respected when little details were left for me to figure out by being observant rather than spoon-feeding. However…

Each of the three sub-plots is interesting in its own right. One deals with the mental health journey of a rape survivor. Another is the blatant misuse of power to cover up heinous crimes. And in culmination, we see the wrath of the common man unleashed when he is frustrated by the unfairness of it all. These are shabbily patched together one after another.

From being a mute spectator of life, our protagonist transitions into one who takes matters into his hands. The word ‘transition’ softens the jerky manner in which this happens. Almost like the writer knows that do what they may, it will be unbelievable, so why spend the effort making it smooth.

The female protagonist conveniently enters and drops from the picture like a prop. Sure, the character is given agency, but it is difficult to believe it when she is missing in action in crucial stages of the story. As if the agency is only for effect and not an intrinsic characteristic. The same goes for the other characters. The traits chosen for them seem like convenient hooks or inclusions to titillate rather than an organic part of the story.

The film’s first half also has a nuanced way of presenting the characters and situations by showing things rather than telling them. As an audience, I felt respected when little details were left for me to figure out by being observant rather than spoon-feeding. However, all this subtlety goes for a toss in the second half, where in-the-face violence becomes the main consumable. 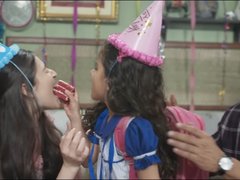 If at all there is anything that makes things believable, it is the performances across the board. I quite enjoyed the choice of keeping almost all characters and people of few words. This gave the actors room to speak with their expressions and body language. All of them, from Vidyut Jammwal to Shivaleeka Oberoi to Sheeba Chaddha, create a response within the viewer, whether it is sympathy or anger. In fact, Rajesh Tailang even carries off a long preachy monologue even though it is out-of-place in an otherwise quiet film and is over-written.

Having said that, I cannot stop thinking of how the child actor must have felt when they watched the film. A film where their character suffers so. A film that they are not old enough to watch.

The one-line plot, “What if a simple, kind man is pushed over the edge by the system?” takes the protagonist from one extreme to another with some shoddy, half-hearted transition in character.

Khuda Haafiz Chapter II Agni Pariksha is grim and disturbing. At first, it churns your insides with the rapes and shakes you up mentally. Later in the film, the violence is gut-wrenching and makes for a difficult watch. All of which could have made for a movie that addresses a social cause. Alas, it becomes a story that knew where to begin and end. But didn’t know how to make the distance.

Thumbs up, by Dhaval Roy, Times of India : ...Overall, Khuda Haafiz 2 is worth a watch for the heavy-duty action and the story that’s high on emotion. The plot remains formulaic but the drama will keep you going.... full review

So-So, by Russel D'Silva, Bollywood Life : ...Khuda Haafiz 2 is not old wine in a new bottle, but an old wine cellar in new barrels, made glossy by Vidyut Jammwal's ability to make the most rudimentary action scenes look better than they deserve to. A prolonged fight sequence in a prison is very well choreographed though and is alone worth the price of admission. I'm going with 3 out of 5 stars.... full review

So-So, by Devesh Sharma, Filmfare : ...Khuda Haafiz truly had the potential to be a cracker of an action-filled romance. But patchy writing has diluted its impact. The only thing that works here, as said earlier, is Vidyut’s virtuosity as an action star. Watch the film for some well-crafted set pieces and you won’t get disappointed...... full review

So-So, Glamsham.com : ...Like the old saying goes, never mess with a man’s family and if you do, make sure that the man is not Vidyut Jammwal, as he will tear your heart out without caring much about the consequences.... full review

So-So, by Soumya Srivastawa, Hindustan Times : ...A by-the-book thriller, Khuda Haafiz is just entertaining enough. Dive even an inch deeper and the flaws are there for anyone to see.... full review

So-So, by Saibal Chatterjee, NDTV : ...In keeping with the direct and quick ways of the protagonist, barring the jail brawl sequence, none of the scenes plays out too long. Even the chases are staged with a welcome touch of minimalism, unusual for an action film fronted by a 'tough guy' actor. Definitely not the kind of cinematic trial by fire that many such films can be, Khuda Haafiz: Chapter 2 - Agni Pariksha is reasonably watchable.... full review

So-So, by Isha Sharma, NewsBytes : ...Khuda Haafiz 2 touches upon multiple uncomfortable realities ravaging society, such as the police-politicians' nexus, jilted lovers, and the usage of women's bodies as sexual territories. However, it is marred by many plot holes, half-baked characters, and a rather long (over two hours) runtime. Had it not been for the action scenes, the real pariksha would have been that of the audience.... full review

So-So, by JOGINDER TUTEJA, Planet Bollywood : ...Shiv Pandit and Aahana Kumra are good to begin with but then are thrust with such thick Arabic accent that it begins to sound forced (and at times even funny) after a little while. As for Vipin Sharma, he has a knack of making a scene entirely his own whenever he appears on the frame and one just longs to see more of him every time. As a villain, Nawab Shah is there for just one scene but does well, as always.... full review

So-So, by Anuj Kumar, The Hindu : ...But much like the pulpy novels, the film does exactly what it complains against. It comments on the voyeuristic gaze of electronic news but finds it hard to eschew it itself. It wants us to ponder on the social shaming of survivors of physical assault and on action against juvenile perpetrators of rape, without munching on the consequences of taking the law into one’s hands. That’s some Agnipariksha, a test by fire! The last page of the chapter suggests that the next part will address it.... full review

So-So, by Stutee Ghosh, The Quint : ...Shivaalika Oberoi walks into the proceedings and is scooped out at will. Sheeba Chhadha speaks her dialogues with relish but she knows as well as we do precious little is going to come out of it. If checking out Vidyut’s action is your greatest pull. Go watch it.... full review

So-So, by Pallabi Dey Purkayastha, Times of India : ...Khuda Haafiz’ — literal meaning ‘May God be your Guardian’ — does not have the most innovative script on the planet but it still could have worked had it not been for the randomness in the second half and the outrageously sham Arabic accents. Watch it for Vidyut flexing his muscles in the most amusing way imaginable, peeps!... full review

Thumbs down, by Rahul Desai, Film Companion : ...Casting Rajesh Tailang as a morally sound reporter based on Ravish Kumar is smart, but his character is as disposable as the film itself. A film that doubles up as a ‘trial by fire’ for the brave people who watch it. There, I made it till the very last line. But it had to be done. Restraint is overrated.... full review

Thumbs down, by Anupama Chopra, Film Companion : ...I think Khuda Haafiz 2 wants to be so purposefully disturbing that it shakes viewers out of their lethargy and complacency. Which might have happened if the narrative had more heft. Violence needs to be rooted in insight. Otherwise, what’s the point of enduring it? Also, a request to filmmakers – can we please stop brutalising women so men can be heroes... full review

Thumbs down, by Shubhra Gupta, indian express : ...The climactic chase involving SUVs and gun-toting baddies takes place in the shadow of the Sphinx, and a leading man who seems to have internalised the mantra — see neck, will slice. But like in the first part, and the way this one ends, which leaves us in no doubt that there will be a third, no one has bothered answering that question: how does a software engineer turn into roaring Rambo? Does he have a secret life that we are not aware of? Maybe the third part will give us those answers.... full review

Thumbs down, by Shubham Kulkarni, koimoi : ...Go for it if you are a Vidyut Jammwal fan, there’s a lot of him. But if you are not, this one doesn’t have much to offer.... full review

Thumbs down, by Sameer Ahire, Movie Talkies : ...Khuda Haafiz Chapter 2: Agni Pariksha would have been a much better film with a sensible storyline. The same social appeal was made by Rohit Shetty‘s Simbba in 2019 only, and even that film needed a boost from Cop-universe. Consider Khuda Haafiz 2, which is neither a cop universe movie nor a South remake. The film makes for a below-average product that has got some hot action sequences but is pulled down by a terribly cold and outdated storyline.... full review

Thumbs down, by Kunal Guha, Mumbai Mirror : ...For an all-out action thriller, there’s a lot of fast-paced Read more at: https://mumbaimirror.indiatimes.com/entertainment/movie-review/khuda-haafiz-movie-review-2-stars-this-vidyut-jamwal-starrer-packs-some-mindless-blood-spilling-action/articleshow/77548146.cms?utm_source=contentofinterest&utm_medium=text&utm_campaign=cppst... full review

Thumbs down, by Rohit Vats, News18.com : ...I know it’s tough for Nargis in a foreign land, but it’s even tougher for us to bear Annu Kapoor’s put on accent. May she return safely, but I wouldn’t want us to pay for it.... full review

Thumbs down, by Namrata Thakker, Rediff : ...Khuda Haafiz 2 comes across as an unnecessary sequel that has been made just to showcase Vidyut in action mode.... full review

Thumbs down, by Nandini Ramnath, Scroll.in : ...Kabir brings visual flair to a 146-minute film that is also avoidably sordid and needlessly ponderous. The makers and cast put on a good show for what is essentially a garden-variety vigilante movie.... full review

Dear Meetu, the overdose of gruesome violence portrayed in all our recent movies is a clear reflection on the state of our youthful minds, who are engaged in violent video games and a pepped up anger.. The director should have equally balanced drama and action in both the halves.

Raj has given this movie a So-So(Effort was good, missed opportunity). Raj has posted 93 comments and has rated 61 movies. See Raj's page for more details.
meeta

Raj, maybe. Or maybe the director perceives the audience as you say.