wogma rating: Watch, but no rush (?) - But its musical magic deserves theatre visit

A musical feast for the ears and eyes. Irrespective of your understanding or taste, this katyar (dagger) strikes a right chord with your heart. A potential milestone for Marathi cinema, this near-perfect period drama is sadly marred by narrative flow. Yet, the rating has a rare exception. A film like this does deserve theatre experience at least once.

Katyar Kaljat Ghusali quite literally pierces a katyar (dagger) through your senses and your heart, time and again through the movie. It brings melody to your emotions. It makes you croon, even if you don’t get it right. It leaves you overwhelmed every now and then. Foot-tapping can be taken as a granted. And above all, it deluges you with a universal tale of greed, betrayal and vengeance. But just when interval is forced and the feast comes to a logical end, you turn impatient, and rightfully so. You crave for reliving the magic all over again. So gripping the narrative is that you unknowingly turn a blind eye to its periodic predictability and clichés. Truly, only a first-hand experience can reveal what that means. Whether that’s because of the inexpressible intensity of music or top-notch production or atmospheric visual treatment, you find your own reasons to appraise it.

The importance of katyar begins right from its narration as it takes us into fictional, pre-independence era in Madhya Pradesh. Whether or not you have seen stage adaptations of the original natya sangeet Katyar Kaljat Ghusali – on which the film and its music is based, the voiceover ushers in. You see a musical maestro arousing a kingdom. You suddenly see another potent singer anguished with his poverty. There, you sense the conflict, the purpose of this film and also its journey. Early moments into the film, or even with its trailer, you can easily articulate where the film is headed. Yet, your eyes stay glued to the visuals. After all, what matters is the journey and not its pre-determined conclusion alone. Whatever you expect, it ensues right through the film. The difference between your prediction and the makers’ vision, however, is what this film is all about. Of course, that can be said of many films out there. But as far as the latest one’s vision is concerned, it is spot on.

But a completely enthralling experience is unattainable and also culpable without the writers. While some terrifically-worded scenes hold your breath, more than a couple of immature moments and characters make the film look stupid. My biggest problem is periodic blockages buried deep down in narrative flow. The emotional impact of certain scenes is already over, yet you are made to see what you need not be seeing. 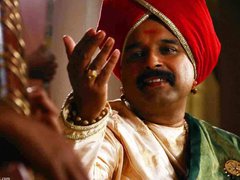 If you can make Sachin Pilgaonkar and Shankar Mahadevan watchable and very believable, you not only deserve the praise, but you also prove your potential as the director. Subodh Bhave handles emotional spontaneity aptly, but he is frequently at fault with overboard mannerisms and superficial reactions. His camera blocking and staging is first-rate. His camera is versatile in terms of mood, framing and movement. But, shots after shots are used in order to avoid scenes from becoming inactive. It could probably be a good move, but I find sudden cuts as unnecessary as tight close-ups.

It’s a rare feat when a musical transcends in a lot of department and not just music alone. The beauty of Katyar Kaljat Ghusali is that you don’t need any special liking for Indian classical music to like the film. More than a few elements come together to make your experience worthwhile. The film’s colourist also deserves applause. Rarely do colour palettes and colour grading help create periods of our films as believable as it does here.

You can’t get everything right all the time, despite a good deal of effort. Katyar Kaljat Ghusali is another such example. It is written very well, yet it has some unintentional blemishes. It is staged very naturally, yet it has some easily-avoidable blots. Even so, I’m glad that a film like this sees the light of day. It would be a perfect situation had it reached or surpassed its true potential. But at least it tries (missing narrowly).

Abhishek Gosavi's reviews .... Read it if you have nothing better to do.

Parag has given this movie a Yay! Thumbs Up(Awesome movie. 4.5 stars out of 5 for this movie). Parag has posted 1 comments and has rated 1 movies. See Parag's page for more details.
Fan

Planning to watch it.

The review gives a feeling that this is Amadeus or more at home like Shaka la ka boom boom or London dreams?

Fan has given this movie a Yay! Thumbs Up. Fan has posted 714 comments and has rated 200 movies. See Fan's page for more details.
Fan

I liked the film. Although it did take some time into the film before its magic grasped me. Sachin as the Khan saheb was spellbinding. Superb performance. Technically the film is not perfect but still it does its job.