A documentary on the power crisis in Kanpur, Katiyabaaz, directed by Deepti Kakkar and Fahad Mustafa, is a powerful film (no pun intended). Insightful, scathing and even a tad bit depressing at times, the film is crisp and thoroughly entertaining, but with also a rather pertinent point to it all.

Metro city dwellers who rarely, if ever, face severe power crises, probably take their access to electricity for granted. But for a large portion of India outside the biggest cities, daily prolonged power cuts because of deficits in generation and supply, are still a sad reality.

Katiyabaaz, a documentary on the pitiful state of affairs with regard to electricity in Kanpur, is quite an eye opener. Not only does it succinctly and memorably highlight the key aspects of the subject it deals with, but it also is pretty much a reminder of what is wrong with India today.

Narrated by following two diverse points of view - one of a katiyabaaz (a term for someone who provides illegal electricity connections), and the other of a bureaucrat who headed Kanpur Electricity Supply Company Ltd or KESCO - the film takes us through the gamut of problems that the citizens face, and the lengths they go to in an attempt to fix it. 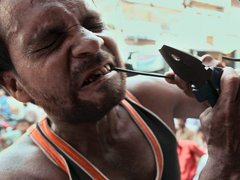 The former, Loha Singh, is who one you could consider the target audience of Salman bhai's Eid releases. He is flashy, funny, garrulous, belligerent and has a rather disproportionate sense of self worth. And yes, he manages to come up with some outrageous one-liners.

But what one would notice most about him if one observes him carefully, is his willingness to tread moral lines. You see, here is a man who knows he's doing something illegal, but who feels he has the right to do so, because he has been screwed over by the system, the villain.

Symbolising this villain is Ritu Maheshwari, who assumes KESCO's reigns at one of its worst periods. She is honest, intelligent and seems to genuinely want to change the system. One really feels for her, as she tries her best to set things straight, crack down on power theft so that electricity can be distributed better, and attempt to connect to consumers better through the use of technology. Yet, there is only so much a bureaucrat can do when the populace is stubborn and the political leadership is ineffective in providing better infrastructure.

The film rather beautifully captures the flavour of Kanpur, which is as enchanting as any other place in Uttar Pradesh, never mind the sorry plight of law and order in the state. It is gut-wrenching to think of a city that was once known as the Manchester of the East because of its former glory days as a centre of industry, reduced to shambles as a place that suffers daily power cuts of as long as 15 hours. (Oh, and its former name, Cawnpore, has such an old world charm to it!)

The film treads shaky ground, however, when you consider how it has been treated. Situations that would have been a surreptitious part of daily life in Kanpur take place in front of the camera, and hence they end up looking staged. Loha Singh in particular, while a hoot in his interviews, seems to be playing to the gallery when not talking directly to the camera. He seems conscious of the fact that he has a shot at doing what his cinema idol does - perform for an audience - and he seems to relish the idea. These portions of the film - the ones that appear fake (for want of a better word) - are where the film's intentions come into question, even though it carefully avoids taking any actual sides.

Still, the film unfolds with the pace and style of a thriller, before it ends on a high that raises questions that one would really like to delve deeper into. If this is what it takes to popularize the documentary format in India, then so be it. But Katiyabaaz is a film that every Indian will identify with and learn from, if they truly want to.