There's nothing to hold your interest apart from the picturesque locations and pretty faces, and a promise that it is a Mani Ratnam film

In Kaatru Veliyidai, Mani Ratnam revisits Kashmir after 25 years of his magnum opus, Roja (1992). The difference is that today the protagonists are not as idealized as they were then. When the lover is captured, the beloved, instead of running pillar to post in the political corridors, seeks solace elsewhere. The lover too is not sweet and docile. He exhibits strong biases and does not treat the beloved right.

Such reduction of the female character is definitely a big drop in Mani Ratnam standards since Roja.

It is not the first time that Mani Ratnam has attempted flawed characters. Alaipayuthey (2000) presented a close-up of marital discord due to differences that become clear as the honeymoon period gets over. Irritability is a common flaw he seems to imbue his characters with. The same is deep seated in Varun a.k.a VC, Kaatru Veliyidai's male protagonist. He exhibits self-centeredness and flares up quickly and frequently. That's fine, it makes him real. However, is real always interesting? No. And that's where the film lacks. Varun and Leela are real, yes, but also predictable because they are crafted on an age-old template of binaries: male= macho and hot-tempered, female = deal with it!

To reduce the predictability, the film uses flashbacks with intercuts between the present and the past, which instead of helping, just delay the unfolding of the love story. "Come to the point," you feel like shouting at the screen. And yet, side-by-side you hope that there will be more to it -- more play in the structure, more depth in characters, more twists and surprises, but there exist none. There's nothing to hold your interest apart from the picturesque locations and pretty faces, and a promise that it is a Mani Ratnam film – that he will jolt you somehow and that it will all come together at some point. Sadly, that moment never arrives.

I am surprised to see him not being able to exploit the beautiful setting, the sex appeal of his gorgeous looking lead pair, and even the music of A. R. Rahman - to create something profound and ethereal. Such beautiful ingredients but the recipe tastes stale. What went wrong?

Well, other than the stereotyped versions of Mars and Venus, the story got overcomplicated by the choice of its setting--Kashmir, Kargil, Indian Airforce, Pakistan, etc. The plot could have worked anywhere else, why exactly was it set in Kargil, I couldn't comprehend. It seemed to have only distracted every creative department from prioritising the dramatic core of an otherwise potent theme. 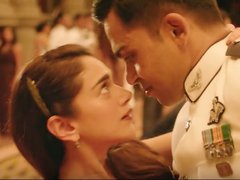 Then, Leela's character must have appeared very strong on paper but on screen, she is nowhere near the person she may have been visualized to be. She is pretty, independent, and has the acumen to handle medical emergencies, but why is she so feeble? Why does she give in? Moreover, while Varun's brashness is indirectly justified through various anecdotes, Leela is treated with utmost apathy. She is reduced to VC's muse in spite of having so much to her.

Such reduction of the female character is definitely a big drop in Mani Ratnam standards since Roja. And, even with the freshness of sharp cinematography and clean production design, Kaatru Veliyidai reeks of patriarchal thought, while pretending to superficially talk against it.

To reduce the predictability, the film uses flashbacks with intercuts between the present and the past, which instead of helping, just delay the unfolding of the love story.

I won't recommend this film. Unless you are a hardcore Mani sir fan and are interested in traversing the journey with him, do not watch!