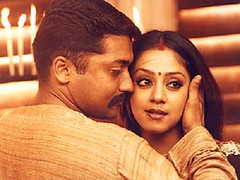 Gautham Menon’s panache has always been his ability to take a simplistic plot that discusses and plays out a basic conflict and moulds it in a way that really hits your heart. Kaakha Kaakha is worth a watch for Menon’s directorial mark and for it’s unadulterated story-telling.

Kaakha Kaakha (remade in Hindi recently as Force is another story that surrounds the idea of vendetta, but it manages to stay with you well after the end of film because it is treated in a manner that makes an instant connection.

Gautham Menon uses many clichés in Kaakha Kaakha: good versus evil, how opposites attract and the eternal celebration of sacrifice but it’s his racy script, Surya’s crisp performance and Harris Jeyraj’s music that makes the film an investing watch.

I remember reading an interview (and I read a lot of them, courtesy my obsession with Surya) which mentions the first spark between the two flew during the filming of the song, 'Uyirin Uyire' and it was such a passionate film schedule, they were married before they knew it. Of course, I had to buy the DVD, and after watching the film I was left with the same feeling – a story that had me so involved, with it’s simple plot but earnest display of emotions, I’d forgotten that I spent well over 2 hours watching a film.

Unlike Force, Kaakha Kaakha doesn’t resort to many gimmicks - (No beefed-up hero picking up a motor-bike and throwing it like a strawberry and the likes). It’s a gripping plot, played out with a sense of ease and with the genuine need to tell a story. Anbuselvan (Surya) is an IPS officer, working in the Narcotics Department of the Police force and for as long as he can remember he has been on the right side of law.

The film begins with a team being formed, headed by Anbuselvan to break the Narcotics rackets across the city. Special training is being undertaken for this mission – all of which is shown to us in well-cut montages. Just before this you are given the peg of the film – he’s a stern officer with the advantage of not having a family or emotional responsibility. When he meets Maya, as an audience you instantly know what his plight is going to be.

Maya (played by the beautiful Jyothika) is a middle-school teacher and as opposite to Anbu as can be, with all her charm and radiance. While this is a run-off-the-mill opposites attract pairing, you forgive this cliché because their chemistry is almost contagious. While they explore their relationship (through a few songs, his resistance to give into his feelings, her naiveté against his professional life and the dangers involved), you are also secretly hoping that their love won’t come in the way of Anbu’s high-risk job.

The film picks pace when Anbu has to fight to keep his relationship out of the spotlight with Pandya (played by Jeevan), a mafia-gang leader who cracks Anbu’s weakness.

While this premise is enough to grip you, unlike Vidyut Jammwal in Force, the villains in Kaakha Kaakha aren’t as menacing as would have been apt. Especially considering Surya’s brilliant performance as Anbu could have done with an equal opposite force; a threateningly psychotic character would have brought out Anbu’s plight much more. However, Gautham Menon makes up for this with absorbing action sequences. It’s a fresh change to see that a romance angle, in an action film, hasn’t been forced for the sake of entertainment but has been duly justified in the plot.

A few songs and characters were out of place, like Maya’s friend or Anbu’s fellow officer, but mostly you would be better off watching Kaakha Kaakha over Force. It’s far more earnest, the chemistry palpable and performances impressive (Jyothika’s a lot more tolerable than chirpy Genelia). Besides, Surya is way better eye candy.

The DVD of Kaakha Kaakha has no features, while the subtitles were apt and synced (I could make out with my broken understanding in Tamil that the translations were rather literal). Mostly you should invest and buy the DVD because Kaakha Kaakha is a pleasantly watchable film – it isn’t flawless or a masterpiece but it has an extremely investing narrative.