Age-old melodrama disguised as period romance. An interesting idea stretched too far and spoiled by directional flaws. It’s visually pleasing in parts, but the narrative is tiring for the most part.

A strong idea and great story certainly play a big part in a fine film. But these alone cannot ascertain the quality of one. A good motion picture (or anything good for that matter) is rarely a coincidence. It’s rather the fruition of gripping vision and decisive execution, besides loads of other factors in varying degrees. Of course, there can be exceptions. Sometimes a story fascinates you so much so that its weaknesses hardly make a difference. Such an exception cannot be made for Kranti Redkar’s debut feature Kaakan however.

Split over two different periods unfolds the heart-warming tale of romance, faith and companionship. But surprisingly, this isn’t Kisu and Sudhamati’s story alone in the first place. It is as much the story of other principal or trivial characters. Each one of them has their own story to tell and each story could be a standalone movie. Every now and then Redkar brings forth some sort of background story to these characters. This is done to bring in a poignant touch and make you empathize with them – nothing of the sort ensues though.

Since each character emerges hero and their stories heroic, subplots tend to distract your interest from the main drama at times. The problem here is that the whole thing is spoon-fed through redundant dialogue. The director prefers informative tricks over visual impact, taking the easy way out. With little narrative novelty, the screenplay lacks subtlety and insights. Logical connections to certain events as well as sequences overlook deliberate thinking. 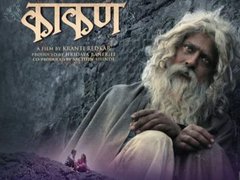 Kaakan is a beguiling idea, but sadly that remains only at a basic level. It is riddled with endless loopholes and mediocrity. But the problem doesn’t end here. Rather it starts off from there, ultimately floundering in what it sets out to do.

Jitendra Joshi’s bogeyman image among kids sounds funny, but poor characterisation ensures that you feel nothing about his worsened conditions. Even so, young Kisu is far more stirring and impressive than the older one. The outcome of flawed direction, he suffers from inconsistent portrayal, as does Urmila Kanitkar’s Sudhamati or Ashutosh Gaikwad’s Gopi. Though not directional masterpiece, the scenes involving Joshi and Kanitkar are compelling than the whole film itself. Rest of it highlights Redkar’s negligent approach.

Over the period; the characters age, but their props don’t – be it Sudhamati’s ribbon or kaakan or even the inside of the tin. By the looks of it, Kisu seems to have had his special haircut and makeup done. Sloppiness in hair & makeup is as much a concern as is its writing and visualization.

The music though stands really strong when everything else fails. It intensifies the film to a point, until its overuse fades the dominance away in the longer run. Foley sound effects and faulty dubbing add to growing failings, making it technically weak.

Not that it’s an offence to make another love story along standard lines. But one should at least be mindful of where and when to draw the line. Not only does Kranti Redkar fail miserably in the writing department, but she also comes across as totally clueless wearing the director’s hat.