A walkthrough of what a man went through to prove that he is alive. Feels like interesting journal entries that strictly stick to the “what” without getting into the “why”.

If it were fiction, we would have laughed at Kaagaz and called it an exaggeration. Like many a story based on real-life incidents, Kaagaz is intriguing mostly because it really happened. Lal Bihari’s cousins convinced a bureaucrat to declare him dead so that they could stake a claim on his property. The rest of the film focuses on Lal Bihari’s attempt-after-attempt to reinstate as a living person.

Kaagaz ends up being an underwhelming affair despite having a unique story to tell.

Sure, it sounds funny, and the film too tries to keep things light. But, that attempt takes away from the empathy that Bihari and more like him deserve. It felt like the audience is meant to laugh at Bihari like the characters in the film for a while.

I would have taken that with a grain of salt if we were given some answers. I understand that it takes a poor man nineteen years to get justice. But, we are not shown why he couldn’t make progress despite having the sympathy of some politicians and media people. Were it fiction, I might have assumed that it was a writing oversight. But here, the writers must have known why things didn’t actually pan out despite reasonable support. This gap makes Kaagaz seem incomplete.

Along similar lines, sitting in the audience, I wondered why Lal Bihari’s son’s rights to the ancestral property weren’t brought into play. In real life, surely there must have been a reason why it never came up. Unless Lal Bihari intentionally let it go because it was about his non-death and not the property. Were it so, knowing that would have tied the story neatly for the audience.

Without these details, Kaagaz is merely reading out a real person’s journal, a person who not many knew existed. Yes, pun intended. The writing is sprinkled with avoidable narration and out-of-place digs. The two that stuck are a cockroach incident randomly inserted to emphasise their capacity for wickedness. As if, the fact that they had declared a cousin dead wasn’t enough to show us they were evil. Then there was an absolutely unnecessary dig at feminism. 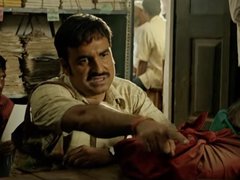 The recap at the end of the film, too was jarring. It was just a 110-minute film, the audience certainly didn’t need it. If it was to show all that the protagonist went through, it is too late to create empathy. That too, through something that the audience already knows. Also, inconsistencies didn’t help. Lal Bihari, for instance, is unable to feed his family but finds brand new clothes to wear whenever he has a public appearance.

Sure, you have Pankaj Tripathi doing what he always does, entertaining us with his deadpan expressions. But that’s about all you get from the acting department. All other actors go through the motions with drama oozing out of their voice and eyes, whenever the director so demands. The drama gets more heavy-handed as the film progresses.

The audience is meant to laugh at Bihari like the characters in the film.

Kaagaz ends up being an underwhelming affair despite having a unique story to tell. A story and person that got itself an Ig Noble prize too! That makes it a film you can watch just to know the story if you’d rather watch than read up a Wikipedia entry.

Oh and for some reason Zee5 refused to show me Kaagaz in its listing. I kept getting thrown back to a list of Tamil films. Just in case you have similar trouble and are looking to watch the film, here’s the link.

Thumbs up, by Vishal Verma, Glamsham.com : ...KAAGAZ is an uplifting, inspiring, wakeup call in 2021. Seeing Pankaj Tripathi in one of his most memorable roles, the movie proves the calibre of the highly talented Satish Kaushik as a master in the 2021 ‘calendar’ from Death of a Salesman (Salesman Ramlal) to this social satire on the ‘Death of Bureaucracy’. Superb.... full review

Thumbs up, by JOGINDER TUTEJA, Planet Bollywood : ...All in all, Kaagaz ends up conveying an original story that makes one connect well with the protagonist, while being also entertained.... full review

So-So, by Subhash K Jha, Bolly Spice : ...The narrative suffers from a strange death wish. By the time Lal Bihari proves he is alive our interest in his story is dead.... full review

So-So, by Madhuri V, Filmi Beat : ...Sandeepa Dhar's dance song 'Lallam Laal' comes across as a misfit, both in terms of the narrative and the picturization. The other songs are passable even though the film doesn't offer any scope for music.... full review

So-So, by Anna MM Vertticad, FirstPost : ...Still, Kaagaz is an enjoyable and important film, held together by its largely assured direction and by Tripathi, one of contemporary Bollywood’s finest actors.... full review

So-So, by Shubha Shetty, Free Press Journal : ...While Kaushik’s attempt to put the point across that most underprivileged people are treated as mere numbers by the politicians, and the government apathy for which it doesn’t really matter if a poor man is “dead or alive” on paper or otherwise until it is election time. However, the film could have been effective if there was more thought put into writing and the execution.... full review

So-So, by Shubhra Gupta, indian express : ...You sit through this only because of the liveliness of Pankaj Tripathi, the actor who owned 2020, and whose playing of Lal Bihari ‘Mritak’, a man buffeted by other people’s malice and guile, is full of sincerity. And humanity.... full review

So-So, by Saibal Chatterjee, NDTV : ...Mita Vashisht and Brijendra Kala (as a judge) have fleeting cameos. Satish Kaushik plays a more extended role with customary aplomb. It is however left to Pankaj Tripathi to keep Kaagaz afloat even when it appears to be wilting a touch under the burden of its solemn purpose. He doesn't let the film down.... full review

So-So, by Gautaman Bhaskaran, News18.com : ...Kaagaz looks at the way justice is meted out in this country, and how the poor and those without any political influence are relegated to a life of hurt and humiliation.... full review

So-So, by Sonia Chopra, Sify Movies : ...Kaagaz tries to be many films in one. It’s the story of a simple man’s “dharam yudh”. It focusses on the plight of people who get so enmeshed in government red tape, a simple task takes decades. It throws light on the apathy of government offices and the corruption that can convert a living man to dead.... full review

So-So, by Pallabi Dey Purkayastha, Times of India : ...To sum it up, ‘Kaagaz’ could have been the go-to movie for those seeking a burst of inspiration, but it ends up being a uni-dimensional masterclass on one man’s acting prowess. Not that we are complaining, but the film had the potential to tug at the heart strings. Alas! It was not to be.... full review

Thumbs down, by Rahul Desai, Film Companion : ...It’s also easy to get complacent in the OTT era, when even a sigh of yours holds more method than entire acting careers, which is why playing a “common man” is a privilege one should only afford under watchful eyes. While the showy Mirzapurs, Gurgaons, Sacred Games and Criminal Justices are designed to mine Tripathi’s range, it’s average outings like these – the sighs between the words – that tend to test an infallible legacy. Over the last few years, I can’t help but feel that there’s more to his ability, so much more, a top gear that most films aren’t equipped to harness. Maybe I’m just being greedy and impatient. (I sound like Professor Gerald Lambeau to Tripathi’s Will Hunting). Or maybe paper is just wasteful. Save our forests, go digital.... full review

Thumbs down, by R.M. VIJAYAKAR, India West : ...The rest of the cast goes through the motions, with M. Monal Gajjar looking fetching and cute and acting ditto. The actress who plays the mastermind among the scheming relatives does well, but that’s it. What could have been a powerful document on screen about a social evil has been ruined by some inept work on “kaagaz” (paper) and beyond. And not even the theme poem by Aseem Ahmed Abbasee, recited by Salman Khan himself, counts in the final score.... full review

Thumbs down, by Nandini Ramnath, Scroll.in : ...Only Pankaj Tripathi, in brownface, and Satish Kaushik, make an impact in a movie that starts promisingly but eventually loses its thread.... full review