Life after the grand wedding deserves a few films. But I wish it wasn’t in the form of Jugjugg Jeeyo’s slapsticky treatment.

Even as a child, when I saw romantic films, I wondered why no popular movie ventured into life after the big happy wedding. This couple fought tooth and nail with family and society. How did they do after getting married? Maybe because it will be a run-of-the-mill story. Jugjugg Jeeyo takes on the challenge and does it in two stages too. Unfortunately, the details and the execution are so cheap and cheesy that I cannot even make a “Watch it for the novelty” recommendation. It doesn’t help that the man-woman relationship’s presentation is skewed by stereotypes making the film uneven.

Though I was flinching every few minutes, the same premise holds promise to be made into a better film.

Jugjugg Jeeyo looks at life after marriage along two intersections through two married couples—modern-traditional and, of course, man-woman. It also uses the narrative tool of having a soon-to-be-married character as an onlooker. She, like us in the audience, is looking at these two couples wondering why anyone gets married at all. So far, so good.

But, oh dear, does the film lose it in the details. The film hop-scotches from ridiculous to yuck to whatever to boring in the situations it goes through. Save a couple of brilliantly insightful lines, there is nothing in the writing—from dialogue to characters to sub-plots—to show that the writers were serious about taking up the challenge that the premise provides.

Indeed, that is the strain throughout the film—the humourlessness of the topic versus the slapstick treatment it is given. It is as if the makers were afraid to present the grim situations as so. One could argue that post-marriage life does not offer much to explore. But to treat it so casually and show an unworthy man’s blasé behaviour as a joke reeked of fear of becoming staid.

It is no surprise then, that Anil Kapoor’s overacting becomes annoying, given the tacky situations his character, Bhim, is put through. So over-the-top is Kapoor that Maniesh Paul’s caricature-of-a character Gurpreet comes across as charming despite the innuendoes he’s asked to carry. In fact, in their side roles, he and Prajakta Koli stand out despite being slapstick and muted, respectively. This, in fact, worked in favour of Jugjugg Jeeyo. That the main characters share space with the supporting ones. Neetu Singh, Varun Dhawan and Kiara Advani hold their own in some intense scenes. If only the scenes were not long drawn out and written with a little more insight. 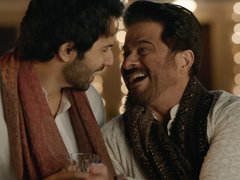 Unfortunately, perceptions of and perspectives on marriage make way for monotonous lectures on the meaning of marriage and shouting matches. And each situation is stretched and forced to make a point where subtlety might have worked better.

Interestingly, the nuances of the changes in the concept of marriage, especially that of gender roles, are presented with more dexterity. Except for one scene, where it is said aloud, the other ideas revolving around the man-woman part of a straight marriage or the transformation of the nature of couplehood in the past few decades register subconsciously. In hindsight, I wonder if it was intentional at all because of the cringe-inducing chaos it is injected into. Just like the attempts at a feministic take smack in the middle of a “men will be men” one.

Unfortunately, the details and the execution are so cheap and cheesy that I cannot even make a “Watch it for the novelty” recommendation.

Though I was flinching every few minutes, the same premise holds promise to be made into a better film. In fact, the same cast would work because of the potential we are already aware of. With so, so, so many films that continue to be made about life before marriage, life after marriage surely has enough content worth making films about. Yes, plural.