The quirks are well placed and done well too. The basic plot though tries to make us believe it is complex and its characters have complexities, but that’s only skin deep. Ultimately then, the film feels like an experiment that doesn’t land too well.

The trailer is intriguing despite being over the top. Both Kangna Ranaut and Rajkumar Rao seem to be out for slapsticky fun, but I have some faith in their choice of films. Thus the hope for a good movie beyond the trailer. Of course, there is a glimpse of snappy dialogue, but there are a couple lame one-liners too.

And there’s that lingering feeling that the change of title is only cosmetic, and the attitude towards mental health might still be flippant and in bad taste.

The thriller elements aren’t entirely gripping, at least in the trailer, I think because we know nothing about the victim and the suspects don’t invoke empathy either. Right now, they are just actors. It has created just a bit of intrigue,d and I’ll latch on to that to hope for a good film.

Within the first half-hour or so, you get a whiff that Judgementall Hai Kya is going to have a few subplots going on, but the various pieces aren’t going to fit snugly. And it plays off like that. The title sequence, for instance, is bold, fresh, sticks in memory but is obviously made with a design brief–the main character does origami, and there is blood involved–a neat idea executed well, not necessarily making a meaningful connection with the product itself.

As far as addressing mental illnesses goes, Judgementall Hai Kya doesn’t do any more harm than already done by Hindi movies, even if it doesn’t aim at respecting the affected individuals’ fate either.

Surely enough, come second half, the plot goes even more out of control than you would have expected in that first half-hour. The disconnect getting stronger. There is an attempt at metaphor that moves on to spoon-feed similes–some of it is engaging because like the title sequence, it is striking, but none of it connects well with the story so far or even with the audience. The parallels between Judgementall Hai Kya’s Bobby (Kangna Ranaut) and Ramayan’s Sita, for instance, never quite align convincingly.

Towards the end, you are supposed to empathize with one of the lead characters, but it is too late, especially for the attempt at bringing balance between insanity and respect for mental illnesses. The characters aren’t written with much depth, but there are a few traits that catch your attention. That Bobby carries her father’s anger, for instance, is one of the characteristics that plays out subtly. The quirks are done right too. I especially enjoyed the remixed old Hindi songs.

Then what you are left with is the performances, and every actor sets the right tone. Anyone who has seen even 2-3 Kangna Ranaut films, especially her earlier ones, would know she can perform as a mentally unwell character without much ado. Here, it does feel overdone at times, but only a couple of times. Rajkummar Rao, of course, sailed through all of it. Interestingly, the one spot where he is required to change gears, it feels like over-acting. Jimmy Sheirgill and Amrita Puri though will linger in memory, especially considering their roles didn’t ask for much.

It might have to do with the fact that both their character seemed to be not that judgemental about the mentally ill. They are amused and inconvenienced respectively but don’t laugh at Bobby’s expense, unlike a couple of other characters who don’t take the issue seriously enough. 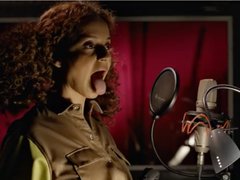 Anyway, as far as addressing mental illnesses goes, Judgementall Hai Kya doesn’t do any more harm than already done by Hindi movies, even if it doesn’t aim at respecting the affected individuals’ fate either. For that, I am grateful. Small mercies. In fact, the social cause is not on its priority list, and it works in the film’s favour. It aims to be a thriller and thrill it does not unless you call 2-inch long, flying cockroaches appearing on-screen thrilling.