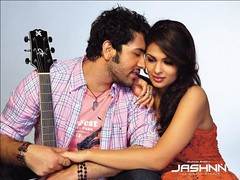 Age old family drama tweaked to give a contemporary feel. Doesn't help the most ancient tug-of-war. Preachy dialogues and scenes that drag on manage to create a soporific effect in the theater.

Remember those family feuds whose existence depended on "killing romance"? Boy king, Girl maid-servant. Boy Hindu, girl Muslim. Boy vegetarian, Girl meat-eater, Boy's family and girl's family are enemies, oh and how can I forget Boy poor, girl rich. We have a little bit of a mish-mash from some of these themes in Jashnn. Which ones? Does it really matter? It is written shoddily and doesn't do any justice to whatever charm these films had should be enough to keep you away from this one.

The film pretty much ends where it starts except for the sudden transformation of characters. Losers as protagonists have to be really, really charming and the storyline around them intriguing to make the film watchable. While the modernized love story which does a sudden about turn as the climax closes in is not palatable at all. Neither Adhyayan Suman nor his character Akash are charming.

We have to grant that Adhyayan covers a huge range of emotions. But, there is something about his personality that doesn't cut him as a lead actor. And he doesn't have that much extra talent to excuse the lack of killer looks to pull him through. Anjana Sukhani on the other hand is a mildly pleasant surprise. There are times when her dialogue delivery is flat. But there are these glimpses in which a single twitch on her face communicate what her character feels. Alas, they are very few and long distances lie in between.

For a movie coming out of the Bhatt camp, Jashnn has non-hummable music and just about alright lyrics. None of them are very impressive and have no repeat value at all.

After going through all of this, thinking back about the film, I understand that the direction could have been a lot worse. I can also imagine the look and feel being a lot less kitschy. But that wouldn't be enough for one to sit through a movie. Sleep through - maybe. At least I felt like I was just up after a good nap when the credits rolled, though I did watch the entire film.

Thumbs up, by Manish Gajjar, BBC : ...The emotionally charged confrontations between the four troubled characters are enough to tug your heart strings due to the directors’ perfect execution of the scenes.... full review

Thumbs up, desi hits : ...The surprise package of the film is Shahana Goswami ... full review

Thumbs up, by Roshni Mulchandani, Life Love and Logic : ...Adhyayan Suman shines and even outshines the rest of the cast.... full review

Thumbs up, Movie Talkies : ...The film flows well for the most part, but the most interesting and compelling moments remain the first half ... full review

Thumbs up, by Subhash K Jha, Now Running.com : ...At its heart, "Jashnn" is a simple story about four troubled people tied together in a baffling labyrinth of complicated emotions. ... full review

Thumbs up, by Gohar Iqbal Punn, Radio Sargam : ...Although the flick is gripping nonetheless it has its shares of flaws like it becomes lackluster in romantic scenes... full review

Thumbs up, by Nikhat Kazmi, Times of India : ...But hey, Jashnn isn't just a story with a lot of heart. It's told with in a heartwarming way too, with moments that touch you with their naked pain. ... full review

Thumbs down, by Baradwaj Rangan, Blogical Conclusion, The New Sunday Express : ...Raksha Mistry and Hasnain Hyderabadwala direct with a moralistic eye trained on the pedestrian tribulations that befall Akash in his pursuit of stardom... full review

Thumbs down, by Anand Vaishnav, Buzz18 : ...ood sister. The notorious sibling could have played an interesting part in Adhyayan's self discovery, had the writers not lost focus. ... full review

Thumbs down, by Aniruddha Guha, DNA : ...A lot of times you can't understand why the characters don't use their brains a bit.... full review

Thumbs down, by Jaiwantika Dutta-Dhupkar, fullhyd.com : ...the directors seem to think that becoming a somebody from a nobody has a lot to do with swabbing toilet floors at hotels and eating cold mess lunches, going by the amount of footage the fact hogs.... full review

Thumbs down, by Rajeev Masand, IBN Live : ...An old-fashioned morality tale with stereotypes for characters, Jashnn fails miserably because the drama's so predictable and most of the performances so embarrassing... full review

Thumbs down, by Mayank Shekhar, NDTV : ...Why think of some rubbish when you can lift from a DVD I say!... full review

Thumbs down, by Ashok Nayak, Now Running.com : ...The first half is quiet strong, high on emotions and reasonably paced. The problem though, is with the second half ... full review

Thumbs down, by Atta Khan, Planet Bollywood : ...At least they continue their tradition of serving us with good music which is once again the highlight of an otherwise feeble effort.... full review

Thumbs down, by Nithya Ramani, Rediff : ...Newcomer Humayun Saeed is quite the surprise package.... full review

Thumbs down, by Sonia Chopra, Sify Movies : ...Adhyayan Suman has worked for his performance and it shows. Which is the problem; for when efforts become palpable, the character's authenticity is affected.... full review

Thumbs down, by Janhvi Patel, StarBoxOffice : ...What works for Adhyayan in his scenes with Shahana is that he just has to react to her unmatched hysteria... full review

Thumbs down, by The ThirdMan, Upper Stall : ...Logic and credibility go out of the window. ... full review