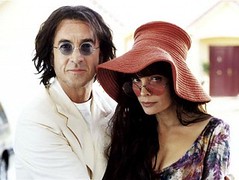 Don’t expect to laugh out loud, roll on the floor laughing or laugh your ass off with Janis and John. It’s funny film, nonetheless, that will grip you with its unbelievably far-fetched premise and drag you in a whirlwind of ups and downs. Without including an element of drama in the film, it still brings out some of the most endearing performances from the three leading actors. Also note how the famous songs of the two late rock icons, Lennon and Joplin, intertwine with the narrative of the film in a celebratory manner.

The definition of comedy has seen an immense makeover since the Shakespeare days. There’s slapstick comedy, satire, black comedy and even rom-com. Similarly, there’s also Haha-funny, Lol-funny and what I’d like to called ‘witty-repartee’ funny. But there are some films that coin their own meaning of funny. Janis and John is one such film, which translates a sense of humour into an entire movie. There’s no name for it, it’s just a simple film about a really funny situation. Period.

Janis and John is set in France around an Insurance salesman Pablo Sterni, (Sergi Lopez) who schemes to dupe his drug-addicted cousin for 500,000 francs: by arranging for the second coming of Janis Joplin and John Lennon. It’s a crazy synopsis, and the first half of the film, which constitutes the set-up of the fraud, is equally crazy. The humour tone of the film lies in this very craziness.

As a viewer you wonder, how in the world is this going to work out? The two actors playing fake John Lennon (Francois Cluzet playing a failed actor) and Janis Joplin (Marie Trintignant, also Sterni’s wife) are remarkably aloof in the beginning. The film graphs their con journey and the whirlpool situations they find themselves in.

The fanatic cousin, Leon’s (Christopher Lambert) sheer reason of existence is the return of his two rock idols. He’d been looking forward to it since he (allegedly) met them in a restroom, where they happened to promise him they would return. The first time Janis and John reach his record shop, we get a glimpse into his fanaticism.

We’ve seen such behavior - young teenagers shouting and screaming around rock stars, girls fainting at the sight of an idol, and more such madness. However, the idea of fanaticism is dealt slightly differently in this film. Leon’s record shop has everything from a replica of the revolver than killed Lennon to Joplin’s favorite Whiskey, Southern Comfort. He seems like a more somber fan, but in reality through his actions you can tell his fanaticism is more about the mania - a kind that could pose some serious trouble.

The rest of the film is one interesting incident after another. Cluzet and Trintignant are absolutely hilarious in the film, in their mission to be celebrities. The star of the film is most certainly Marie Trintignant, who transforms from a meek housewife to a fake Janis Joplin- but it’s a transformation that will shock you. Unfortunately, Trintignant passed away in an unfortunate accident after the shooting of the film. Towards the end of the film, director Samuel Benchetrit, also Marie’s huband, has included many slow, close up shots of her - posing as a silent tribute.

The DVD has no special features, apart from a small 10-minute compilation of uncut scenes. They mostly show Marie and Cluzet trying to perform Lennon and Joplic songs and failing miserably. The scenes graph their struggle to be like rock icons, who in all honestly cannot be replaced.

This is the reason why the film is so amusing. Dialogues and performances apart, the film is funny because it’s a simple account of a highly implausible situation. Watch the film on a lazy afternoon; not for a few laughs, but for a slow, long-lasting smile.