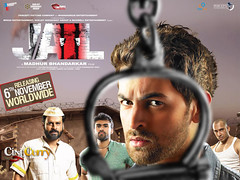 The word spells gloom, the vision it creates makes a shiver run down the spine. The things you've read about this thing called prison invoke the worst of your imagination. The Neil-Madhur combination brings this harshness to life.

A Jail - the subject matter is so grim that the treatment can only be depressing. You see a few characters but it’s the jail that adds, deletes and depletes what had defined them thus far. Parag (Niel Nitin Mukesh) is the one you care for, you want him to get out of this jail. And while doing that, you are sucked in; in to the atmosphere, living one day at a time - sometimes hopeful, some days aimless. And you want to avoid acknowledging that creepy feeling - real life prisons must only be worse. And this is because Parag turns narrator and you see this essay through his eyes. The plot moves on only because life does.

What is shown is mostly what we know already. And yet we must have seen only a small percentage of what really goes on in those barracks. We don't see the boredom a prisoner must have gone through. Why should we care? They are the ones who have defecated society. We have to live in their fear. They might as well rot here to the fullest before they are sent to hell. But then, there are also the ones who repent, the one-time offenders, and … the innocent - yet to be put on trial or worse - proven guilty.

You also are introduced to the other inmates of these jails - the policemen in-charge. What a thankless job that is!? What crime did they commit to be forced to spend their days and nights with the worst that humanity offers? Let alone the day-to-day problems they face from the higher ups, the judicial system, the politicians and their own family.

Yes, Madhur Bhandarkar has taken upon himself to sensitize his audience to the plight of the people who live in a world we know exists and choose to ignore. He does so in a matter-of-fact tone. He doesn't sermonize, he doesn't glamorize. He just opens the door and ironically lets it be so.

Writer Madhur, has chosen one representative for each set of people that constitute an Indian jail. He doesn't necessarily fill in the flesh in detail, but there's enough for us to make a fair judgment about the characters. Parag doesn't say much. But even if you don’t take into account the acting skills used, there's a lot in the writing that tells you about him. There are other characters narrating similar feelings and you know what he's thinking. It is extremely well-woven into the narrative.

There is actually only one main character in the film. And it's risky - banking on just one actor, not even a lady lead to stride alongside. The bet worked. You don't miss more detailed characters. His misery, his hope are enough to agonize you through the 2 hours. Manoj Bajpai is only a bonus. The two show what silence can convey.

The plot cannot be broken down into an introduction, a conflict, and a climax. The first and last parts are way too short. In fact the climax seems too simple and quick. The pace suddenly changes and it ends almost abruptly. But, even so, there's no preaching, there's no epilogue. And that must have been a difficult-to-resist temptation.

This is an autobiography of a prison. Not one prisoner or two. But it’s a peek into a few years of a jail's life. Inmates come and inmates go. You see it, you smell it, you sense it. Parag's misfortune - of being at the wrong place, at the wrong time, with the wrong person - is only incidental. But you will be thinking constantly of the people he represents - the innocent.

Thumbs up, by Martin D'Souza, Glamsham.com : ... It is not close to what prison cells are but Madhur manages to bring the uneasiness and fear that dwells deep within the prison walls.... full review

Thumbs up, by Subhash K Jha, IBOS : ... Here he strips not just his hero but also his plot free of all adornment to give us a long disturbing sometimes traumatic dekko at life behind those stone walls.... full review

Thumbs up, Indicine : ...Does an individual, with a clean past, actually deserve Jail hell until proven guilty by the court? Especially when the very environment can turn an innocent into a criminal.... full review

Thumbs up, by Ashok Nayak, Now Running.com : ...t is depressing at times and probably too hard to digest for most, but Bhandarkar's proves to be a master storyteller as he involves the audience completely into proceedings... full review

Thumbs up, by Hanumant Bhansali, Radio Sargam : ...This has to be Neil Nitin Mukesh’s best ever performance and very difficult to surpass in future... full review

Thumbs up, real bollywoood : ...Madhur has the knack of deriving award winning performances from his principal cast and in here Neil delivers an award worthy performance as Parag Dixit.... full review

Thumbs up, by K N Gupta, SmasHits.com : ...While critically examining the movie we find that its USP is the human face of its each character in spite of their involvement in heinous crimes.... full review

Thumbs up, by Nikhat Kazmi, Times of India : ... Kudos to Bhandarkar for taking an ekdum different take on the notorious Indian jail. ... full review

Thumbs up, by SpiceZee Bureau, Zee News : ...It’s hard-hitting, shocking yet relatable and thought provoking but certain flaws and exaggerated emotions leave the film short of a blockbuster.... full review

So-So, by Naresh Kumar, Apun Ka Choice : ...Neil digs his teeth well into his character and brings a mix of seething angst, cathartic outbursts and hopeless resignation against his situation.... full review

So-So, by Bobby Singh, Bobby Talks Cinema.com : ...However, the director’s excellence is still evident in a few well conceived sequences related with some important characters in the script. ... full review

So-So, by Rajeev Masand, IBN Live : ...But despite the clunky writing, it's a relief to see Bhandarkar empathasise with his characters rather than exploit them for cheap titillation like he's done in earlier films.... full review

So-So, by Gaurav Malani, indiatimes : ...he falls short on detailing the internal intricacies of imprisonment and the story gets slack with no distinctive graph to the character conflicts. ... full review

So-So, Movie Talkies : ...one feels that he could have done more to explore the effect this has on the individual's psyche. ... full review

So-So, by K K Rai, STARDUST : ...Neil Nitin Mukesh is really amazing in the character of Parag, when he becomes an inmate of the jail and does not know what to do... full review

Thumbs down, by Tushar Joshi, aslibaat.com : ...In jail he succeeds in giving us a first account of what goes through the mind of a prisoner when he leaves behind the all familiar and takes on a new life.... full review

Thumbs down, by Baradwaj Rangan, Blogical Conclusion, The New Sunday Express : ...Shouldn’t there be some restraint, a faraway shot of the nude outline of Parag (when he’s strip-searched upon entering prison) instead of a close-up of his crotch blocked out with pixels?... full review

Thumbs down, by Shweta Parande, Buzz18 : ...no real highs or lows in the film... full review

Thumbs down, by Mayank Shekhar, Hindustan Times : ...The formula is quite simple. You take the protagonist through hell in a murky setting that is the film itself. ... full review

Thumbs down, by Priya, J.A.M : ...The film looks like a bad documentary on Indian jails. ... full review

Thumbs down, by Khalid Mohammed, Passion for Cinema : ...Like it or not it’s pouring cliches out here, from the hero finding the prison food ugh-ugh (did he expect sushi?) to the initial undressing parade.... full review

Thumbs down, by Padmaja Thakore, Passion for Cinema : ...The plot of Jail is unlayered and uncomplicated. ... full review

Thumbs down, by Raja Sen, Rediff : ...Bhandarkar's modus operandi is simple, to pick out a subject, decided on its stereotyped negatives, ones that are already more than well-entrenched in the public consciousness, and then vilify it.... full review

Thumbs down, by Sonia Chopra, Sify Movies : ...We also don’t get a real glimpse of Parag’s family who is serving a sentence of their own.... full review

Thumbs down, by Samiya Shakir, StarBoxOffice : ... Not only is he stone-cold expressionless, even his body language in the movie seems forced to stiffen up - no reason why confinement should make you so rigid- given that its a hostile atmosphere and one should be easy and learn to adapt.... full review

Thumbs down, by The ThirdMan, Upper Stall : ...Neil Nitin Mukesh alternates between woodenness and some extremely funny face-making in the name of intense acting.... full review

Yay! Thumbs Up, by rahul : watch if u have three hours to pass

So-So, by Varun : lyricswale.com is a comprehensive online resource for musicians and music lovers which provides text

Parag (Neil Nitin Mukesh) is wrongly accused of a crime he hasn't committed. His life in prison is what we are about to see.

I saw azab prem ... and then read that Jail has a better review @wogma. But I feel after all considerations Katreena might make the difference for me :D

This is a good movie to watch

rahul has given this movie a Yay! Thumbs Up(watch if u have three hours to pass). rahul has posted 1 comments and has rated 1 movies. See rahul's page for more details.