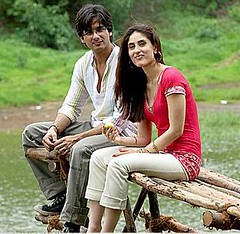 An entertaining first half that establishes the characters and an emotionally charged second half keeps you interested in a rather regular love story. The story is as far from reality as can be, but then, that is what escapist cinema is all about, right?

It's warm, it's cuddly, it's adorable, and it's telling the truth in the disclaimer at the beginning - it's fictional. Obviously, characters like Aditya Kashyap and Geet can exist only in imagination. But we are used to letting go of our need for "resemblance to reality". And once you do that you begin to identify with the emotions playing on the screen at that moment, even though the character as a whole is pretty unreal.

Life is unambiguous when it is black and white. Everything is crystal clear. My problem with stories usually begins when people transition from black to white (or vice versa) without going through the gray. Here, it irritates, it nags, but soon enough the dialogues and the sheer charm of the actors playing the characters take you away from thinking too much about it.

The dialogues have a very fresh feel to them. They are outright funny at times and quite perceptive at others. And they are hardly ever mundane (except the one given to Dara Singh!). What I found most interesting is that, whether comic or thoughtful, they were very believable.

It must be some sort of an art form to actually make use of Kareena Kapoor's over-capacity to bubble and sparkle - it's very well woven into the story. I have always liked the way her eyes express her character's sorrow. But, in the movies I have watched so far, it is usually a glimpse, just a flicker. Here however, she retains the tone impressively for a longer time. It is also great to see Shaheed Kapoor get the chance to show his maturity as an actor. As clichéd as the events might turn out to be, you don't want his character to be hurt.

How can escapist cinema survive without its song and dance? We have plenty of foot-tapping numbers with fresh lyrics. The visualization of the songs was also done well. Especially, "tumse hi" - makes you really believe that the characters are in love.

The length of the movie works against it. The average runtime of a movie in recent times is about two hours. There should be a very good reason for me to stay the extra 20-25 minutes, without fidgeting. And in this case, there was no spectacular cause to hold me. Tarun Arora's (Anshuman's) sequences were handled rather shabbily - almost as if they were intentionally ignored so that the audience does not empathize with him. They should have been cut down to bare minimum. And Dara Singh was absolutely, totally, completely avoidable - from all aspects - relevance to story, line(s) given to him, and the way he delivers them.

While watching the movie, there were various points at which, I wanted the script to take an unexpected turn. A turn that would make it a little more substantial than just "time-pass". But, that was not to be. It's silly, it's mushy-mushy, it's not to be taken seriously at all - it's a perfect date movie. No more, no less.

Thumbs up, by Sundeep Maan, All Bollywood : ...complete wholesome entertainment, regulatory song and dance, romance, comedy…but all packaged in a chic and embryonic manner sans cliché and melodrama,... full review

Thumbs up, B4U TV : ...Music by Pritam is very soothing. The picturisation of these songs are not only well-timed, they are also well-shot.... full review

Thumbs up, by Baradwaj Rangan, Blogical Conclusion, The New Sunday Express : ...suffers – particularly in the post-interval portions – from a storyline that becomes increasingly tedious... full review

Thumbs up, Bollyvista.com : ...Tarun Arora performs like a wimp, but suits the character to a "T".... full review

Thumbs up, by Manasi Paresh Kumar, Deccan Herald : ...I love this movie. There is no logic in it, doesn’t tax your grey cells and yet leaves you smiling at the end... full review

Thumbs up, by Deep, Deep's Home : ...The music was kind of ok, couple of songs were very nice though... full review

Thumbs up, by Shubhra Gupta, Express India : ...What makes this movie almost as bubble-gummy appealing is the two-film old director’s ability to create felt moments in a story whose end you know right when it starts.... full review

Thumbs up, by Martin D'Souza, Glamsham.com : ...From Mumbai to Bhatinda to the picturesque locales of Manali, cameraman S Natrajan Subramaniam captures the essence of each place.... full review

Thumbs up, by Khalid Mohamed, Hindustan Times : ..... but it’s not what you think.. the screenplay has organised a lemony twist. Cheers.... full review

Thumbs up, by Rajeev Masand, IBN Live : ...Despite the film's severely flawed second half which is too long, too contrived and predictable to the extent of being seriously boring, Jab We Met is still an engaging watch because it sets off on such a fresh note... full review

Thumbs up, by Taran Adarsh, IndiaFM : ...JAB WE MET is as refreshing as an ice-cold watermelon juice in scorching heat.... full review

Thumbs up, by Praveen Lance Fernandes, indiatimes : ...It is the new age director Imtiaz Ali’s direction and writing which is to look out for.... full review

Thumbs up, Movie Talkies : ...The film is filled with several enjoyable and well written moments between the two lead characters.... full review

Thumbs up, by Ashok Nayak, Now Running.com : ...He has convincingly depicted the growing bond between two strangers who accidentally cross each other's path one night and embark on a scenic yet amusing journey... full review

Thumbs up, by Subhash K Jha, Now Running.com : ...The dialogues flow in a steady stream of vocalised thoughts and not a single shot strives for effect.... full review

Thumbs up, by Hanumant Bhansali, Radio Sargam : ...The editing and the screenplay needed to be more developed... full review

Thumbs up, by Naomi Datta, Times Now : ...Kareena Kapoor has the best lines and she has done justice to them... full review

Thumbs up, by Nikhat Kazmi, Times of India : ... Thematically, you might call it a shaken and stirred mix of Dil Hai Ki Manta Nahin and Dilwale Dulhaniya Le Jayenge... full review

Thumbs up, by Saakshi Juneja, To Each Its Own : ...The chemistry between the leading couple is fantastic and once again the credit for this has to be given to the director... full review

Thumbs up, by Neha Viswanathan, Within / Without : ...It’s entertaining, and makes puppy eyes at you... full review

So-So, by Aparajita Ghosh, Apun Ka Choice : ...Though a predictable love story, ‘Jab We Met’ is different because most of it is set outdoors... full review

So-So, by Amit R Agarwal, merinews : ...Editing could have been crisper... full review

So-So, by Syed Firdaus Ashraf, Rediff : ...The change is too abrupt, and it is difficult to connect the first half with the second.... full review

Thumbs down, by Amit Kaundinya, J.A.M : ...5-6 songs poured in , designer clothes, one big Punjabi family, boy – girl have fights then live happily ever after.... full review

Thumbs down, by Vaibhav Wankhede, M TV : ...The film has plenty of witty moments but then at times is also very filmi... full review

Thumbs down, Upper Stall : ...this isn’t a film that delves deep into the human psyche or explores unconventional relationships… It’s a film about cigarettes, babas, ghosts, and hacked off fingers! Keep us engaged, please!... full review

Yay! Thumbs Up, by TimELiebe : Wonderful Bollywood rom-com starring Shahid Kapoor and Kareena Kapoor at their most appealing.

The full-of-life Geet (Kareena Kapoor) meets a very glum Aditya Kashyap (Shahid Kapoor) in a train. She forces him to talk to her, to amuse her and to take her to Bhatinda. What transpires in this journey and thereafter, is what we see in 2.5 hours.

its really sad that after doing such a romantic movie the two Shahid and Kareena are no more a couple. May be all reallove storys doesnt have a ending like the reel one. soory guys

I saw this movie simply because Shahid And Kareena wont be working in future. if they did also they wont have that chemistry like the one i saw in Jab We Met.
this movie is simply superp. Shahid seems to have acted his real life.

shahid u rock man in the song mauja mauja with kareena

RATINGS-THUMBS UP
THE MOVIE WAS REALLY ENJOYBLE! SHAHID AND KAREENA WERE SUPERB.I ENJOYED ALL THE SONGS [SPECIALLY THE TWO FAST SONGS].

JAB WE MET IS VERY HEARTLY MOVIE.ITS TOO ROMANTIC AND FUNNY.I GOT THAT RITHEM OF LOVE.

Interesting chemistry between Shahid and Kareena.Shahid is really a nice actor ,but should go for nice scripts.HAs potential like his father Mr.Pankaj Kapoor.
This movie has really maintained to gain continous attention from the viewers.Its really not the easy task.

Congratualations to each and everybody whose efforts have been put,to make this movies an outstanding blockbuster hit.

ther is no word for itthe movie was supereb

Jab We Met is one of the best Flick that I have ever saw, in this movie Kareena was awesum and shahid was also good,in this movie Kareena perfomed a punjabi girl N after saw that I also want to live like that but when i heard that Kareena left Shahid alone I am very upset with that, Kareena u did wrong with Shahid,Shahid is so innnocent.

Your Review on Jab We Met and Rab Ne tells me that Pappu can't Review. I'll better listen to my 6 years old sister which I believe can review better than you.

That aside, my main issue was with Anshuman not being any competition to Aditya. That's just lazy writing.