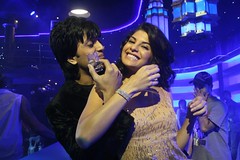 Stay put. You'll live without knowing where this one came from! It tries to be funny, but is barely so. It tries even harder to be sweet and romantic and ends up being yucky-mushy. So, neither this nor that, nothing other than Riteish's performance to look out for.

What IS love? A movie, which has its protagonist arrive, all the way, from Venus (yes, the planet) to find out how humans fall in love should have answered that question, neigh? Apparently, love is that flimsy thing that moves on from one person to another in no time, for an equally flimsy reason. It can be argued that the film proposes that, such flimsiness occurs only till one finds 'true love'. But only a few of us will delve that deep into the movies altruistic purpose. For now, the take home is, "if you love someone, tell them quick!"

One thing I really appreciated about the film…No, I'm not being sarcastic!...is that the 'other' guy is not a lame character. He is the kind who can woo a girl and is not playing games to win her approval. This is such a welcome and refreshing change from the "Loser" or "crooked-minded" 'other' guy we see in our films.

This one 'different' characterization and Riteish Deshmukhs's performance are about the two things that make this movie just about watchable. But, that too is to be taken with a pinch of salt. Interesting characters are a necessity not a luxury, so why should an audience have to thank the makers for one. And once a possibly engaging situation is created, you still have to take it further and hold you on till the climax. No such luck, here. You know the outcome well in advance, and the rest is just a formality.

Formality is also what the other actors seem to be doing with their characters. The women have to look pretty and be the chirpy-bubblies to distract from the fact that there is actually no real plot. They do look pretty, but that's about it. They are not even granted a few of the mush-gush "snore-snort worthy" romantic lines that the men are ordained with.

What's left then, is filled with supposed-comedy. A sample is Kaushal, Rajesh's (Riteish Deshmukh's) friend's interest in all things sex. Just that one single track running through his mind is apparently as Rajesh's alter-ego. If they ever did, I'd think those jokes worked like 10 years ago. I assume, the youth towards whom the film is targeted, has better humor than that. And their idea of love.

Oops! Did I just admit that I'm too old for such tripe? I hope not, for the future of comedy and romance in our cinema, I hope not.

Thumbs up, by Magik, Passion for Cinema : ...So as I said earlier I liked this film, may be not more than Jhankar Beats, but somewhere in that domain... full review

Thumbs up, by K K Rai, STARDUST : ...iteish looks completely in control while enacting the comic sequences in the first half, and audiences would love him for that.... full review

Thumbs up, by Nikhat Kazmi, Times of India : ...The film may not boast of a great story, a scintillating script, but it has enough to keep you smiling.... full review

So-So, by Bobby Sing, Bobby Talks Cinema.com : ...Still, the saving point is that the proceedings don’t let you doze off due to many other interesting elements added by the director Milap Zaveri in the first half. ... full review

So-So, by Taran Adarsh, Bollywood Hungama : ...This is Milap's directorial debut and he clearly shows a flair for comic entertainers.... full review

So-So, by Deepa Garimella, fullhyd.com : ...The amount and style of mush in this one is a brazen throwback to the times when the Hindi movie industry was made of all the stuff that the Hindu movie industry currently spoofs in every alternate film.... full review

So-So, Movie Talkies : ...So far, Zaveri had the courage to be original, but in this half, he falls prey to clichés. The film now gets predictable and fails to hold one's interest.... full review

So-So, by Subhash K Jha, Now Running.com : ... Strangely Zaveri's writing skills, so much on display in many of the most successful comedies in recent times, are missing in the scenes set within the film industry. ... full review

So-So, by SpiceZee Bureau, Zee News : ...Nevertheless, some rib-tickling sequences in the first half give you the reason to have ample laughs... full review

Thumbs down, by Usha Lakra, Apun Ka Choice : ...Though ‘Jaane Kahan Se Aayi Hai’ starts promisingly, bringing on some smiles, but those smiles vanish faster than it takes to say ‘cheese’.... full review

Thumbs down, by Baradwaj Rangan, Blogical Conclusion, The New Sunday Express : ...By the time Deshmukh’s eyes well up with lovestruck tears, you no longer care who ends up with whom, or even if they wind up in Earth or on Venus.... full review

Thumbs down, by The Narcissist, Cinemaa Online : ...So, the loser trio sets out to make Desh fall in love with the Venusian loser, which he does without so much as a whimp... full review

Thumbs down, by Martin D'Souza, Glamsham.com : ...The film does have you in splits in parts as it takes you to fantasyland. ... full review

Thumbs down, by Khushbu, Gomolo.in : ...laughter seems to die out after the first 45 mins. ... full review

Thumbs down, by Mayank Shekhar, Hindustan Times : ...It’s just sweetly revealing to watch anyone set themselves up for such a flake, fake, forced version of mainstream-proper, regardless.... full review

Thumbs down, IBN Live : ...Riteish Deshmukh can be the saving grace of the film but only if you are fond of him.... full review

Thumbs down, by Kaveree Bamzai, india today : ...Everyone also smiles too much, which is great if it's an advertisement for good dental work but disastrous in what is supposed to be a romantic comedy... full review

Thumbs down, by Mihir Fadnavis, india.com : ...the attempts at humor make a viewer long for the comedy and romance of 'Black Friday'.... full review

Thumbs down, by Shubhra Gupta, indian express : ... But I’m hard put to recall a duller segment : practically everything about the film, including this pair which we last saw in `Aladin’, feels like we’ve seen it a hundred times over. ... full review

Thumbs down, by Renuka Vyavahare, indiatimes : ...Riteish, Vishal and Jacqueline all three render impressive performances and are the saving grace of the film.... full review

Thumbs down, by Tushar Joshi, MiD DAY : ...Cameos by Akshay Kumar and Farah Khan are brilliant as loud caricatures of themselves... full review

Thumbs down, by Anupama Chopra, NDTV : ...Fernandez, whose gleaming white teeth and incessant smile, suggest a dental-ad model rather than an actor, works like a pin-prick on a balloon. ... full review

Thumbs down, by Ashok Nayak, Now Running.com : ...A well directed laugh inducing first half is followed by a terribly clichéd and predictable second half that kills the overall joy of the film.... full review

Thumbs down, by Sukanya Verma, Rediff : ...Dude, just two days back, this guy was completely besotted by another pretty thing (a vivacious Sonal Chauhan). Microwave feelings, anyone?... full review

Thumbs down, by Shilpa Jamkhandikar, Reuters : ...This is one of those movies that could have been reduced to a 15-minute dialogue between the lead pair telling each other that they love each other... full review

Thumbs down, by Janhvi Patel, StarBoxOffice : ...The music, barring the mediocre title track is noisy and tuneless and the choreography is pathetic too. ... full review

Thumbs down, by The ThirdMan, Upper Stall : ...The kindest thing you can say about Farah Khan's unbearable cameo is that she was sporting enough to embarrass herself. ... full review

So no good movie this weekend also:(

Just realized something - when I have nothing better to do - I can watch these very predictable "Girl meets boy or vice versa" bollywood movies easily. I know what is going to happen - but it is the general feel good environment about it that makes it bearable.

I guess that's what years of Bollywood does to you - when I am totally bored I would rather watch a boring bollywood movie than watch a serious hollywood flick. :P

@Rahul...yep! But I still want an intelligent no-brainer :)