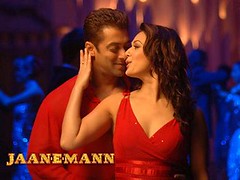 Same old story, same old acting, same old music, same old choreography, but fresh direction! Shirish Kunder has used a very different and enjoyable style to direct flashbacks and dream sequences. Such innovativeness needs to be applauded and encouraged. Jaan-E-Mann can be appreciated for this particular novel approach, but do not expect anything more.

Note that the direction is new, not the comedy. It is almost all…SLAPSTICK!!! 3-4 good laughs are not enough to pull a movie, which is based solely on comedy, through. It is a shame when embellished colour, lighting, and photography have to be used to convey emotions. It is a shame when wigs and exaggerated make-up have to be used to compensate for the lack of comic timing by our “stars”. It is a shame when Anupam Kher, Anupam Kher…the immensely talented comedian is unnecessarily dwarfed and has a nasal voice to make the movie funny. Now, that is a disgrace! Moreover, a generally overenthusiastic cameraman has used a weird camera angle and even weirder camera tricks to create the midget effect. Ridiculous, not funny, I say. And anyway, do people really think midgets are people to be laughed at?!?

The rest is just ordinary. The story is just slightly, very slightly amended from your regular love-triangle-catapulting-woman-between-two-men affair. The much advertised twists will hardly bend a nerve in your brain. The screenplay is choppy; transition from scene to scene is abrupt. And the movie a good 30 minutes too long.

Preity Zinta does yet another ‘girl friend/spouse’ role, with her regular flair. She looks beautiful, especially in the pinks and peaches. Salman Khan uses his superbly toned body to overcome the lack of talent - again; someone ought to tell him muscle movement is good for his face too. Akshay Kumar once more wastes his potential on clowning around aimlessly. Aman Verma looks like he is competing for the loudest speaker of the year award.

The performances are not helped by the inappropriate sound mixing. In some of the songs, the voices are so loud that you barely can listen to the music and in some scenes the background music overshadows the dialogue. The music of 'humko maloom hai' is agonizing, especially 'galtiyaaaaaaaan'. The lyrics of the ‘sad - humko maloom hai’ and ‘ajnabee shehar’ are good. But looks like Gulzar saahab was specifically asked to write extra simple lines for the target audience. Most of the other songs are outright prose – not poetry.

But, hey it’s the festive season, who cares about plots and good lines? There are enough takers out there for tomfoolery, and this one is the giver.

Thumbs up, by Irfan Makki, Planet Bollywood : ...is very likely to leave a lasting impression, not entirely for its content but for its execution.... full review

So-So, by Prema K., Bollyvista.com : ...Farah Khan's choreography adds to the rich experience but at times the songs become too long and overdone.... full review

So-So, by Nikhat Kazmi, Times of India : ...Like spouse Farah Khan, Shirish doesn’t take himself too seriously and tries to construct the first half of the film as a spoof that revels in all the cliches of traditional Bollywood fare.... full review