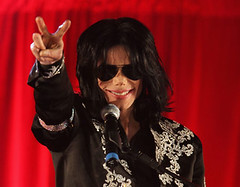 Before I begin, I think it would be wise to state that the review is going to be a little biased, me being an ardent fan of Michael Jackson.

This Is It is a film about what could have been. From March through his untimely and unexpected death in June, Michael Jackson and his crew were busy preparing for what would have been his comeback concerts (after 10 years) at London’s O2 arena. What followed, in the approximate two hours of the movie, was a glimpse of what went on during those rehearsals. It would have amazed the audience had it really been it.

This Is It is not a documentary. It is more about his music, his performance. There were fireworks, aerial dancers, majestic costumes, astonishing visual effects and incredible choreography all set to Michael’s classics like “Billie Jean”, “Black or White”, “The Way You Make Me Feel” and “Thriller”.

It was very enlightening to see the young dancers he'd chosen to go on tour with him look into the camera with tears in their eyes and thank him and describe how he'd changed their worlds before they'd ever even met him. It made me wonder if they were interviewed after his death.

The production notes said that the movie was made from over 100 hours of rehearsal footage and I doubt it because it appeared that those were rehearsals for a handful of different days, judging from Michael’s clothes.

And I hope that it's true that Michael really was saving up his energy and voice for the actual concerts as he said in the movie, because even though he sounded and moved superbly for a 50-year-old, he looked tired and frail in some of the sequences.

As the movie went deeper, so did the nostalgic feelings in me. I was just 9 years old when Michael had toured India as a part of HIStory world tour and I would be elated when MTV would become MJTV for some hours, playing only his numbers, as a part of the tour’s promotion. “They don’t care about us” evoked in me the breathtaking performance of the same number in Mumbai in 1997.

But throughout the melodious documentary, there was a melancholic, uneasy sentiment lurking. After wrecking my brains for long, it hit me. What was missing was the audience. We were all used to seeing Jackson’s concerts with the spectators going wild in hysteria. Girls sobbing uncontrollably, people fainting. That used to be the magic, the madness of Michael Jackson’s concerts. All that and more was absent in the rehearsal footages. And it made me feel sad. It somehow coupled with the fall of the artist over the years owing to his eccentricities and finally his death.

“This Is It” facilitated a highly nostalgic farewell to the world of a glorious artiste. It was a splendid souvenir for genuine fans of the late king of pop. And I would be an optimist here and refuse to believe that this was created for purely monetary purposes.

This review is by guest reviewer Rajat Agarwal. As hobby I watch movies, play synthesizer and read books. For work, I am a final year engineering student in Noida and the founder of MyFaveTeacher.com. Rajat Agarwal also blogs at http://myfaveteacher.com/.

This is it - Cast, crew, links