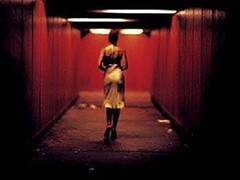 Irreversible is notorious. While watching it you’ll feel like a little boy, who’s been thrusted with a camera and exposed to the realities of life, so to say. It might not be entirely realistic, but the treatment of the film will make you feel like a child, it’ll make you feel raw and vulnerable. It’s a difficult film – watch it only if you can sit through films like that.

Whatever you’ve heard about Gasper Noe’s Irreversible is true. It is disturbing, graphic and brutal, and definitely not a film that everyone can watch. Maybe that is one of the reasons I wanted to watch the film. Not entirely because of a rebellious streak, but because I remember reading a review about the film long ago that said it shouldn’t be seen by women. I don’t know if I wanted to make a point or just see what the big deal was with Irreversible, but regardless, there is no denying it is a painful watch, for more reasons than one.

Irreversible is told in a reverse narrative, about a couple, Alex (Monca Bellucci) and Marcus (Vincent Cassel) who head out on a regular evening to a party. The movie follows Marcus and Alex’s ex Pierre (Albert Dupontel), through a route of revenge for a brutal act against Alex.

There are sickening bouts of violence and sexual explicitness through the film, the intention of which seems fairly clear on the director’s part. The idea is to make the viewer feel extremely uncomfortable, with swirling, shaky camera movements and jarring, low frequency sounds that dominate the first thirty minutes of the film. Purposed achieved, except what remains unclear is how the fundamental plot of the film justifies this treatment.

It’s as if Noe decided he wanted to bully his audience, with the experimentation portrayed in Irreversible, barring the fact that hand-held and shaky camera movements are hardly experimental these days. This might be a purist thought, but if a filmmaker decides to use certain experimental techniques in his film, shouldn’t the basic story of the film have some sort of connect to it?

As a viewer you can deduce why Memento used a non-linear technique, to explain the complexities of the situation involving Leonard Shelby (Guy Pearce). Lars Von Trier’s Antichrist also has a reputation of being graphic, but after a viewing you can understand that it’s a part of the personalities of the lead characters.

With Irreversible, however, one feels like Noe wanted to make a film involving sexual explicitness, extreme violence and wanted to experiment with camera and sound – so he chose the first basic story that came to his mind. Irreversible is technically meticulous, no doubt. The overall feel is like the camera’s been handed to an omniscient bystander, who has no control of it. The film seems like it’s been taken in one shot, the cuts are cleverly included at correct points.

He’s played around with the idea of time, in terms of narrative structure and thought provoking dialogue – but again the question of relevance comes in. Somehow, at the end of the film you don’t feel like the reverse narrative is justified – perhaps it’s because the climax, even though a revelation, doesn’t match to the build up of the narrative.

The official DVD has a couple of basic features like the director’s commentary and an interview with Belluci about the film. But the star attraction of the DVD is definitely a making of the violent and sexual scenes – how certain tricks were used and the invisible cuts were planned.

In its defense, Irreversible does hold a certain vision of emotions gone wild, and that being translated into a visual experience. Maybe the treatment is faulty, and there might be some viewers out there who’d appreciate blurry, seemingly Avant Garde feel of the film, or maybe I’ve missed the point entirely. Nonetheless, Irreversible is a hard film; surely one to extract an extreme emotion out of you. Whether you’re a man or a woman, be warned before you watch it.

Yay! Thumbs Up, by V : as simple-minded as reviews ever get