A raging hell, indeed but one that is neither as hot nor shines as brightly.

Question : What should you get if you add equal measures of a Nicholas Cage'y Treasure Hunt and a Bourne'd tale of amnesia and hallucination to an already campy here ,frivolous now narrative that is a Dan Brown - Tom Hanks - Ron Howard affair? Answer: A raging hell that is Inferno but well in this case, one that is neither as hot nor shines as brightly. And therein lies the rub - Inferno is a film that is less than the sum of its constituent parts. For while some of the parts - screenplay, back ground score, cinematography - work very well, others such as direction, storytelling and even some performances don't quite pull their weight.

Tthe overall lack of novelty can rankle many a fan of the genre.

Which means that writing a review for a movie such as Inferno doesn't necessitate a watching of it - for the most part it sticks to template and its viewing is purely incidental. And while there are only so many tropes that can be designed and tricks that can be pulled, the overall lack of novelty can rankle many a fan of the genre.

The one thing Inferno did for me - and is likely to do for you - is make you pine for Florence in all its Il Duomo and Davidesque resplendence and magnificence. The background score by Hans Zimmer is both reminiscent of the charm of the chase in the earlier two flicks in the series as also accounting for the intrigue in the present installment.

Elsewhere, for a book that is a size of a tome, coming up with a screenplay that has (a) coherence and cohesiveness, (b) running length of 2 hours and (c) stays true to the source material in letter, spirit and essence is both remarkable and in the end, partly redeeming.

Irrfan Khan, after what are ostensibly starting problems, is in fine fettle in the second half - seemingly having the most fun of em' all, whilst also staying refreshingly semi-serious. That too in a movie and amongst performances that otherwise take themselves too seriously, considering the material at hand. 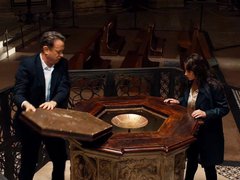 In sum, Inferno is not a spectacularly bad movie but its just that it isn't a terribly good one either. For a review that started with an existential question, ending with a practical one would be fitting, yes?

So, should you watch it? Well, given the overall Italian flavour in the air, it would be shame not to invoke Elizabeth Gilbert's Eat, Pray and Love and its most celebrated cult phrase - especially given how well it channels the response here: Attraversiamo - 'lets cross over'.

Inferno is not a spectacularly bad movie but its just that it isn't a terribly good one either.

Watch it if you must, give it a miss if you ain't up for shlock this weekend.

Like many people around the world, I have read all the Dan Brown books. Including the books without the character Robert Langdon. Restricting myself to only the Robert Langdon adventures, I must say that Inferno was not my number one on that list.

If the book did not interest me as much as the other books, then why would the movie be different?

But being a Dan Brown and Robert Langdon fan, I did make it a point to visit the theatre and watch this on the large screen. It is an alright watch - even for someone who has read the book and knows all the twists and turns that are likely to come up. Although I must admit that my recollection of the details in the story was very vague, the only character that was very clearly etched out in my memory other than Robert Langdon was that of the Provost (played nicely by Irrfan Khan). The movie adaptation however does not do justice to the plethora of historical information (facts) that was scattered liberally all across the book. Just one or two passing remarks or statements of historical facts - and the rest was a nice modern day thriller. Nevertheless, for someone who has not read the book, I can imagine that this can be a nice thriller to Watch.

Performance wise, Tom Hanks can now play the Boston based symbologist professor with eyes closed. Amongst the others, Irrfan and Omar were good. BTW: is it a coincidence that the last 2 Irrfan Hollywood big ticket films also featured Omar Sy, albeit always in a minor role compared to that of Irrfan. And closing this post on Irrfan, I was pleasantly surprised to see him billed 3rd in the credits, and only his single name on the screen!!! I had not realized that he had become so influential in Hollywood.