You expect kids to be entertained in an animation film made for kids and that purpose is served. However, in terms of novelty Ice Age has nothing – visually or in the story.

The first thing that comes to mind when I think “Ice Age” is Ray Romano's voice. By itself the voice has a quality that is entertaining. However, too much of any thing borders unbearable. In Ice Age Collision Course, the voice sounds more like an annoying drawl.

The rest of the characters are asked to shriek and shrill they are. Every character is excited and therefore every voice sounds urgent, in panic or just out of control. A lot like a slapstick film. Even though, thankfully, Ice Age Collision Course is not too slapsticky, it is a good thing that the loud circus lasts for only about 95 minutes. 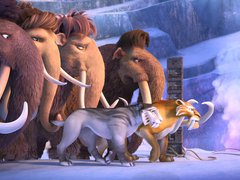 Ice Age Collision Course could have pretty much done without 3D - except for the “acorn causing havoc” phases of the film, maybe. The film doesn't even try to use the technology creatively.

Just like it doesn't even try to write a new plot. A bunch of animals are trying to escape some geological phenomenon. Because cuteness coefficient of animals > human, family values and emotions we associate with humans are enacted by animals. That too with lazy and lame writing. There are a few smiles but they are few and far between.

Ice Age Collision Course has just about enough to engage its target audience – kids who have followed the franchise. After all, they get their dose of pop corn and soda along with it.

I have not yet seen an entire Ice Age film from the start till the finish. I was so looking forward to watching this one, especially on the big screen.

Looking at most of the average reviews, including above, I am having second thoughts.

@Fan Looks like that will not happen now. The movies are going bad to worse. Maybe you could just watch the first one. :D

Yes, will have to settle for one of the initial ones on DVD. With so many sequels, it is usually the case that the first one is the best.

Nevertheless, I have watched every acorn trauma. Simply hilarious watch.

@Fan Oh that they are! And totally adorable. On a similar note, I love the short story before Pixar films.