The third and penultimate film of the Hunger Games franchise is the weakest film so far in terms of story and graph, though we get a deeper insight into Katniss Everdeen. Jennifer Lawrence is, expectedly, the best thing about the film yet again.

Most of us have probably heard the story of the man who, many, many years back, was thrown out of a train compartment that he had a rightful ticket to. The man went on to become a rallying point for an entire nation that wished to free itself from colonial rule. If you pause to think, you do wonder whether India would've attained independence if Mohandas Gandhi had been less affronted by the apartheid and racism he faced.

The Hunger Games series and its heroine, Katniss Everdeen, are much the same, really. Katniss never wanted to rebel against the oppressive regime that Panem was under. All she wanted to do was protect her sister. Yet, that one little act thrust her into the spotlight, as, by the end of the second film, she became the symbol of rebellion against the Capitol.

The Hunger Games: Mockingjay Part 1 begins almost exactly where Catching Fire left off. Katniss, if you remember, inadvertently disarmed the force field enveloping the arena holding the Games. She was then air-lifted by a group of rebels, much to her chagrin. If you don't have the first clue what I'm talking about, then this film isn't for you anyway, because it makes little attempt to refresh memories. The whole film has been treated with the assumption that the audience is familiar with the first two films (and why not?) 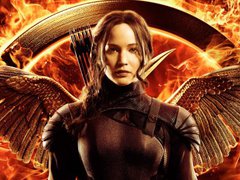 More than the first two films, it is this third film in the four-part movie series that really provides an insight into what kind of a person Katniss Everdeen is. It also once again reinforces the sheer talent that Jennifer Lawrence is. One almost feels that if J Law were to face the same situations in real life that Katniss feels in the film, she'd probably react the exact same way.

I keep coming back to the word that I always like to use for both the actor and her character - 'spunky'. Righteous, but never self-righteous; shaky but never nervous; angry, but almost never out of control; Katniss is a heroine you'll love more, the more you watch her.

Apart from her, though (and the presence of one Phillip Seymour Hoffman), there's little in the film that makes it a must-watch all by itself. It is unavoidable if you're watching the franchise, but it also really conveys very little new, apart from what we figured at the end of Catching Fire - that a revolution is brewing, and Katniss is the Mockingjay - the symbol of this revolution.

What's most disappointing about Mockingjay Part 1 is that there is very little action in the film; in fact, there isn't a single large action set piece, just a few isolated little scenes. Yet, what it lacks in action and thrills, it tries to make up for with little things, like an interesting sub-plot about Katniss being filmed for propaganda purposes, with a Leni Riefenstahl-ish female director to boot. Still, nothing can quite make up for the disappointment of not getting to see Everdeen display too much of her archery skills - one of the highlights of the earlier films.

Director Francis Lawrence handles the film like a mixed bag. He seems to have a grip over the emotional graph he wants to follow, but the arc of the film itself actually does so little for the overall story, that you sometimes wonder if the novel Mockingjay could have just been made into one film, to neatly wrap the series up as a trilogy.

The first two films saw Katniss make giant leaps as she revealed her nerves of steel, her unabashed virtuousness and fierce talent. This one, well, it just seems like a place holder. Hopefully, all the fireworks, excitement and thrill have been left for the final film, which will take us to the conclusion of Katniss Everdeen and Panem's fight for freedom - the kind of fight we're subconsciously so familiar with, but which will always resonate if done well. But for that, Mockingjay Part 2 will have to go many, many notches above Part 1.

Nay! Thumbs Down, by Imbpau

This was a talkative disaster when you compare it to first two parts! What was that man, at all times, they were shooting videos and it was not at all cool!

Imbpau has given this movie a Nay! Thumbs Down. Imbpau has posted 1 comments and has rated 1 movies. See Imbpau's page for more details.