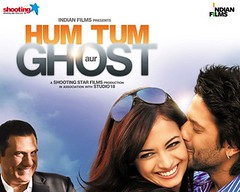 Medical science and the super-natural power of seeing dead people are mixed. This would have been fine if the light vein didn’t mix so abruptly but with the overflow of sentiments. Ultimately we are left with a dissatisfactory resolution which seems unintentional.

NOT A REVIEW - Just wondering if seeing dead people could be funny or romantic, it's a rom-com they say…

Arshad Warsi used to be an actor whose films I'd look forward to, even if he played a character role. Off late however, his comedy flicks have been a complete turn-off. He acts well and all that but the scrip selection has been not too short of torture.

Hum Tum aur Ghost might, just might, be a break from that. For it has been written and produced by Arshad himself. Though there is that chicken-and-egg question. Did he produce a film because he wanted to cast himself as a lead actor or did he become the lead actor because he was producing the film? Either ways the intention doesn't look perfect.

Somehow, so gelled is that image of Arshad Warsi as a side-hero, that it is really not easy to imagine him carrying a film off on his own. Same applies to the lead lady, Dia Mirza too. She's sweet, she's pretty, but because she's never really been cast by herself in the lead role, it's difficult not to look around for more girl-power in the film. Sure, she was the only woman actor in

These images combined with the over-powering stature and lure of the ongoing IPL tournament are already negatives in the Hum Tum aur Ghost profit and loss statement.

But this bit of news has aroused my curiosity a bit more than normal. The writer/producer Arshad Warsi and director Kabeer had a row due to creative differences. It was supposedly because of the treatment the film was being given. Arshad wants a light film but Kabeer is more interested in giving it a serious look.

The funniest bit is this -

So we decided that let the editor [Steven] decide what's best for the film. We decided to step out of the editing suite and let him take the decision.

Really now? This is some education for me in film-making or 'behind-the-scenes'! Not only does the editor have the power to decide on the treatment, it is actually possible to decide on the tone of the film in post-production?! How? I mean, how?

Anyway, turns out Arshad won that one. Come March 26 we will know whether it was a good one over the serious, "I see dead people"

There’s a lot of confusion - in the story and in the execution. As is true of many stories that deal with paranormal and mental health, Hum Tum Aur Ghost too, shuttles between the two. Some take sides, some argue it out like a drawing room conversation. Here they don’t do either very intentionally. Which is refreshing but in turn they don’t get the audience involved in the story either.

I felt like a pendulum that sways from subtle comedy to serious drama. And the shifts are pretty abrupt. As abrupt as some of the scenes are stuck together – literally looks like the film was randomly chopped and glued together. It was extremely disorienting.

The entire cast looks like they have made a good-faith attempt at getting into character. You see romance and sweet nothings being exchanged. They should have brought that “aawwww” moments, but no such luck. The emotions look way to superficial.

The saving grace though is that some of the comic lines are as subtly slid in as they are funny - very. But they are also very few and quite far between. And the sudden tone shift between funny and display of emotions doesn’t help either.

Ultimately, the entire film feels like one big trial, a rehearsal for a mediocre show. The confusion in the minds of the makers is way too transparent. Maybe the only situation in which I’d say, I don’t want the thoughts of the writer/director to show through to me.

So-So, by Martin D'Souza, Glamsham.com : ...Post interval, the film plunges as the plot goes haywire. Chief among them being the length of the film.... full review

So-So, by Divya Solgama, Gomolo.in : ...Music by Shankar Ehsaan Loy is decent. Dj give me some more, Dekho Raste mein are very nice and keeps the romantic mood going on in the film.... full review

So-So, by Preeti Arora, Rediff : ...Dia is the surprise package of the film. She has shed oodles of weight and might just be successful in making a transition from being a supporting actress to becoming a leading lady... full review

So-So, by Nikhat Kazmi, Times of India : ...t's too abrupt and makes you wonder why Arshad is weeping his way through a sequence that barely touches you.... full review

So-So, by flyingrodent, Upper Stall : ...Finally, lets give it up a little for Arshad who does try to make things happen a little differently for himself. ... full review

Thumbs down, by Nikhil Kumar, Apun Ka Choice : ...The problem with ‘Hum Tum Aur Ghost’ is that it’s neither riotously funny nor emotively moving. ... full review

Thumbs down, by Baradwaj Rangan, Blogical Conclusion, The New Sunday Express : ...So this is what lies in wait when we die – the passage to the afterlife may be l’ordeal, but at the other end there’s L’Oreal. What a pity, then, that this makeover didn’t extend to Kabeer Kaushik’s lifeless chronicle... full review

Thumbs down, by Bobby Sing, Bobby Talks Cinema.com : ...the writers seem to be absolutely gone out of ideas in the entire screenplay as there is not a single enjoyable scene in the whole movie.... full review

Thumbs down, by Taran Adarsh, Bollywood Hungama : ...The sole saving grace is the performances by the principal cast. Sadly, that's not enough! ... full review

Thumbs down, by The Narcissist, Cinemaa Online : ...Since the film was based in London, the performances from every single person in the cast remain ice-cold. ... full review

Thumbs down, by Deepa Gahlot, cinemaah : ...ladies and gentlemen of the audience, who did not appreciate his true talent in Seher are responsible for the mess--- good-looking mess, one might add-- that is Hum Tum Aur Ghost... full review

Thumbs down, by Deepa Garimella, fullhyd.com : ...doesn't take its core plot too seriously at first. And then, when it does, it's just not enough.... full review

Thumbs down, Indicine : ...potential to be an entertaining film but it fails to capture the essence and falls flat due to a flawed script... full review

Thumbs down, by Udita Jhunjhunwala, Live Mint : ...M. Night Shyamalan should sue the film’s makers for the blatant borrowing of his famous punch line from The Sixth Sense in this confused film... full review

Thumbs down, by Anupama Chopra, NDTV : ...At the end of Hum Tum aur Ghost, a character declares: kisi ne sahi kaha hai, love conquers all. Not quite. For one, love cannot conquer this muddled script... full review

Thumbs down, by Subhash K Jha, Now Running.com : ...The screenplay by Arshad, Soumik Sen and Arshad Ali Syed is a deadweight carried forward not by any inward conviction or compulsion, but by the producer-leading man's will to create a slick and cool space for himself within the stifling space allotted to a one-note film... full review

Thumbs down, by Sampurn, real bollywoood : ...a fantastic idea on paper which in its execution could have been made into a hilarious film with some very good emotional moments thrown in... full review

Thumbs down, by Sonia Chopra, Sify Movies : ...While the first half is about too little, the second tries cramming in too many things.... full review

Thumbs down, by K N Gupta, SmasHits.com : ...Dia is completely fresh with a performance in which she looks ethereal yet exceptional. ... full review

Thumbs down, by SpiceZee Bureau, Zee News : ...The novelty of the plot somewhere gets lost amid the gratuitous song and dance sequences between the lead pair. ... full review

Nay! Thumbs Down, by harga hp