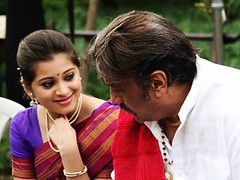 wogma rating: Watch if you have nothing better to do (?) - If you do watch it, do so in a crowd, for its unintentional humour.

Some films are best enjoyed when you laugh at them. Hridaynath, directed by Amar Gupte, falls smack in the middle of that category. Despite an earnest effort by Jackie Shroff, the film’s poor story and screenplay can throw intolerant audience members into a tizzy. Watch it only if you absolutely loved Ek Tha Tiger (perhaps not even then.)

A soliloquy by the film's lead actor, Jackie Shroff, against the backdrop of a sunset along the Konkan coast, talking about the disconnect between matters of the heart and mind; the touching, if tad dramatic, revelation that he is a schoolteacher in a village who is about to retire after 40 years of selfless service to generations of students; things were indeed set up nicely for a sensitive story about a middle aged man on the cusp of a new phase of his life.

Alas, not only does the film go downhill faster than a professional skier, it is the 'how' of it that will truly boggle the audiences' mind. The tragedy here is that I can't talk about the asinine plot twist at intermission that threw one particularly petulant audience member behind me into a hyperventilating rant about the evils of choosing to watch a film based on its promos.

It isn't just the absurdity of the plot that rankles though. The entire setup and resolution are flawed because of the excess in them. One whole half is spent repeatedly hammering the character traits of the protagonist on the audiences’ head, while the other half is spent deconstructing it, in a sense. Also, while considerable and noteworthy effort has clearly gone into making the film look like it has decent production values, the fact remains that the lack of budget shows quite often.

If one were to put a gun to my head however, and ask me to point out at least one positive that can be drawn from this film, it would have to be Jackie Shroff. The man is quite clearly having fun, and in spite of his labored Marathi, one can clearly see the hard work that has gone into his dubbing for the film. And which Rangeela fan wouldn't smile at the sight of Jackie Shroff and Urmila Matondkar together on screen, even if the situation is plain ridiculous?

If ever there had to be a movie whose plot deserved to be given away, it would undoubtedly be Hridaynath; discussing the film would be infinitely more fun than the film itself. However, since I truly believe in the ideology behind wogma, all I'd like to say is that unless you like Parinda as much as I do and have grown up in awe of Jackie Shroff's swagger in films like Tridev, Hridaynath can very safely be avoided without an iota of doubt.

Yay! Thumbs Up, by Vijay Hunswadkar

jackie doing first time marathi film ana we feel its great and proud of marathi film makers.
Hridaynath its good film.
and every hindi film actor and actress ready to work in marathi film. because we are staying in maharastra.