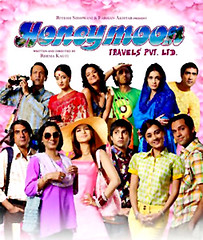 The first half of this movie is really funny. Acting is super. I had a few problems with the characterisation. Would have been better, if there wasn't a forced story for every couple.

The first half is hil-larious! There are really funny lines and situations in the second half too, but the compulsion to have a story breaks the flow. Nevertheless, all the laughs were the perfect medicine for my horrible cold. Yeah-yeah, I know my illness was not on their mind when they were making the movie, just thought I’d let you know because I felt like it. Just like, the writer threw in special effects, or her stand on social issues.

Comedies like these bring out the dependencies between the dialogues and the comic timing. The great performances wouldn’t mean anything without the witty lines. And as always, funny lines cannot tickle you if they are not delivered right. Someone please tell me, why don’t real radio jockeys speak this sensibly? It’s the serious parts (mostly in the first half hour after interval) where things drag. They do not gel with the general tone at all. The side-side story of the driver is out of place too. And the preachy tone in the end – Why? Why?? Why??? Also, why does the screenplay slacken in the second half.

Acting by one and all is exactly what their characters demand. Yes, even Amisha Patel! When I first heard that she was playing a loud character, I was dreading the time I would see this movie. But, her restraint comes as a pleasant surprise. There are too many artistes to name them all here, but everyone has done their roles full justice. And so have the costumes of at least some of the people. I was really kicked by how the geek was almost always dressed in a solid-colored collared T-shirt.

Most of the characters and their idiosyncrasies were dealt a fair hand. I especially liked how the sexual orientation of some of the characters was handled sans the usual snickers associated with such issues in Hindi movies. A whole range of honeymooners is covered here, from the chauvinist who is more interested in photography than his wife to the couple who had no use for a camera, from the arranged marriage to the love marriages. While most characters are consistent, there are a few that leave you with questions. Since, discussing these would give out a little more than I like, check out the details section (spoilers there!).

The songs look better than they sound. They are the kind that grow on you because you have seen them. The choreography of “pyar ki ek kahaani” is absolutely breathtaking.

This movie has a very Hrishikesh Mukherjee feel to it. And that says a lot coming from a huge Hrishi-da fan. This is certainly the kind of light movie we needed after a series of serious movies we have seen in the last four weeks. If only, Reema Kagti had not worried so much about trying to squeeze in an actual story for every couple.

Thumbs up, by Rachel Fernandes, Bollywood Mantra : ...Nonethless Reema Kagti's first directorial venture does manage to make a mark as an above average film which is fairly entertaining... full review

Thumbs up, by Hetal Adesara, Business of Cinema : ...Sans a single dull moment, the dialogues by Anurag Kashyap too keep the momentum going... full review

Thumbs up, by Maria Giovanna, Filmiholic : ...It won’t reveal the meaning of life, but it’s a fun escape... full review

Thumbs up, by Martin D'souza, Glamsham.com : ...Kudos to the director for leaving no loopholes as far as groping for identification of characters is concerned... full review

Thumbs up, by Taran Adarsh, IndiaFM : ...is a notch above the commonplace... full review

Thumbs up, by Prachi Singh, MovieWalah : ...The story tells about the contrasts and colors of a married relationship and puts the couples in different scenarios and backdrops... full review

Thumbs up, by GaRaM, Now Running.com : ...The screenplay is intelligently innovative though at instances it even resorts to some cinematic clichés... full review

Thumbs up, by Pankaj Shukla, SmasHits.com : ...My thought process is broken by a huge laughter wave that starts from the front row ...They are enjoying every scene of the film.... full review

So-So, by Deep, Deep's Home : ...Everything goes well in the first half, infact first half was simply superb, hilarious... full review

So-So, by Rajeev Masand, IBN Live : ...I think the director started off on the right note but didn't know how to tie it all up.... full review

So-So, by Nikhat Kazmi, Times of India : ...But after the introductions, and a few predictable twists in the middle, the story just does not move forward.... full review

Thumbs down, by Nikhil Kumar, Apun Ka Choice : ... It only tries to put its foot in many shoes at the same time... full review

Thumbs down, by Elvis D'Silva, Rediff : ...This film must have looked way more appealing in the script than it ever manages to do during its entire running time... full review

Thumbs down, by Naomi Datta, Times Now : ...the director can't seem to decide whether she wants the film to be slice of life reality or comic book absurd... full review

Twelve newly-weds have booked their first trip as a married couple to Goa through Honeymoon Travels Pvt. Ltd. Their individual stories, the romance and sometimes the lack thereof is all handled mostly in the lighter vein.

Just because this list is long doesn't mean I have to hate the movie. My overall rating indicates the general feeling I have while leaving the theatre. There can still be things that I did not like.

mehak, I loved the part that it had no particular story in mind. In fact, I did not like the bit where they tried to put a story in forcibly for each couple.

addi, yeah, the climax was a let down considering they kept it lively throughout the movie. Oh well...

every one must watch it