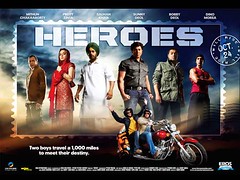 Like the physical map of India, the movie starts off at the north with highs and lows, stays high for a bit and then goes pretty much flat.

I recently visited Sikkim, the tiny, north-eastern state of India that borders three countries. Needless to say we encountered a lot of military camps, one such at 17100 feet above sea level. One question always haunts me - what makes a person decide he wants to stay away from his family, face death every day? What kind of passion drives him? Heroes makes an attempt to answer this question. Unfortunately, what started off very interestingly as a debate is only a camouflage leading us to a pre-determined conclusion.

The stories of the three soldiers encompass all intimate relationships - spouse, siblings, and parents. And it does so well, by clearly defining each prominent member of the family. But, that can't be said about the two bikers who set out to meet these families, Sammy and Ali. There are very slight differences and the things that move or trigger their behavior are fuzzy.

Anyway, the story is not as much about them as it is about what we can draw from the three families. Alas, only one story manages to touch you. The others are crippled by over-dramatization and predictability. The elegance beautifully seeping into interiors of Punjab is a real treat - especially since it's in such contrast with how loud Punjabis are usually depicted as in Hindi movies. Certainly, Preity Zinta's composed performance had a lot to do with how her story moves you.

Soon enough, Sunny Deol takes over all the loudness that we were apparently missing. And from then on the narrative is downhill. Sunny Deol comes across as eccentric, but then again, his character was supposed to be eccentric. Having given that benefit of doubt too, it was a bit much to handle. This is followed by Mithun Chakraorty's story which had a lot of potential since he was the only affected character debating against people joining the army. But, it just didn't have the required vigor and enthusiasm to take the movie through to touchdown.

The other culprit is the length of the movie. The forever, dragged on hugs just don't have a place in a movie like this. And it does become a bore when the subtlety gives way to long-winded spiels that shove patriotism down our throat. The slapsticky introduction of the bikers too, was absolutely out of tune with the rest of the movie. Not to mention the songs. Do we really have to see one Deol brother teach the other how to dance?!

It requires courage to avoid the sleaze and the so-called glamour. Yet, Heroes does manage to raise a question and answers it, even if not convincingly. It gives us an opportunity to salute.

Thumbs up, by Subhash K Jha, All Bollywood : ...Portions of Heroes are pure genius, sparkling with the unshed tears of a mother whose child dies before she can hold it in her arms and nurture it.... full review

Thumbs up, by Shannan Mann, Bolly Spice : ...While the main idea is enticing, does it maintain the same route with the plot? The answer is yes! The plot is just as amazing.... full review

Thumbs up, by Karishma Purshotam, desi hits : ...this film is refreshing from the word go....it has all the qualities of a super hit film. It gives a positive outlook to viewers about men serving in the army and the viewer is captured in with this emotional yet entertaining film.... full review

Thumbs up, by Taran Adarsh, IndiaFM : ...HEROES is a revelation. Cinema is all about narrating stories and Samir proves that he's a proficient storyteller.... full review

Thumbs up, by Gaurav Malani, indiatimes : ...The film arouses patriotic feelings without a trace of jingoism and at no point tries to show the neighbouring country in a negative outlook, a major tendency with this genre.... full review

Thumbs up, by Janhvi Patel, indya.com : ...I thought Heroes would be a run of the mill boring drama full of rona dhona. Fortunately, I was pleasantly surprised and left the theatre smiling.... full review

Thumbs up, by Goher Iqbal Punn, Radio Sargam : ...The film has evoking strong emotions. It also arouses strapping patriotic feelings inside you. There are moments, when you automatically salute the guards of the nation.... full review

So-So, by noyon jyoti parasara, AOL INDIA : ...Samir Karnik's biggest flaw probably would be that he lets it flow too much before cutting it out!... full review

So-So, by Sanjay Ram, Business of Cinema : ...Heroes in entirety does this well, but beyond a point from addressing emotions starts addressing problems and actions.... full review

So-So, by Anand Vaishnav, Buzz18 : ...Heroes has an interesting premise that talks about life after war. And though it does fall into the trap of getting too jingoistic in parts (Hollywood does this much better than us), the patriotism is not as overstated as a JP Dutta film.... full review

So-So, by deepa garimella, fullhyd.com : ...Heroes has its light-harted moments, but it ends up heavy, weepy and long... full review

So-So, by Martin D'Souza, Glamsham.com : ...What we have here is a very good story idea; what is lacking is proper cinematic treatment.... full review

So-So, by Anand Singh, Hindustan Times : ...This was an opportunity to show how the army abandons the families of its ‘martys’ to a life of struggle, but Karnik is merely interested in wringing tears the old-fashioned way, and not in starting a debate.... full review

So-So, Movie Talkies : ...Had Karnik passed on the sentimentality this effectively in the plots to follow, Heroes might have been as compelling as its purpose.... full review

So-So, by Sukanya Verma, Rediff : ...The message Heroes would like to convey is patriotic yet simple: You don't have to be a soldier to love your country.... full review

So-So, by Sonia Chopra, Sify Movies : ...On the plus side is the balanced approach towards patriotism in the real world, without enemy-bashing.... full review

So-So, by Nikhat Kazmi, Times of India : ...Alas, the filmmaker chooses to play the patriotic track at such a high pitch, he fails to connect with the viewer, except sporadically.... full review

Thumbs down, by Baradwaj Rangan, Blogical Conclusion, The New Sunday Express : ...Ali(Vatsal Sheth) and Samir(Sohail khan) realise, among other things, that it’s far more honourable to die from enemy fire than by being run over by a bus.... full review

Thumbs down, by Daliya Daspurkayastha, Bollywood Mantra : ...The story idea is noble and pure, but people are already fed up with their own problem and they do not want to moist their eyes anymore by watching such a rona-dhona flick.... full review

Thumbs down, by Rajeev Masand, IBN Live : ...Heroes is a film that has its heart in the right place, but I'm still trying to locate its brain.... full review

Thumbs down, Indicine : ...Samir Karnik deserves a pat on his back for attempting something different. The director also succeeds in evoking patriotism in the hearts of the audience.... full review

Thumbs down, by Ashok Nayak, Now Running.com : ...If you want to see Sunny at his 90s best, Salman as a Singh or a movie on patriotism that connects in parts. Go for it. Else, Heroes is a DVD watch.... full review

It's about three soldiers who lost their lives in the Kargil war and the loss their families suffer. And yet they take pride in their loved one's bravery.

'without giving the movie away' silvan, remember?

Thank you so much Naresh Allu!

well the movies was refreshingly different considered the thought which went into the making of it..
but i think there was too much of pun and weeping scenes to disturb the balance of the movies it would have had otherwise..

This is one great movie review blog i have seen.. i was personally looking for one such theme to suite me :)