A few intense jolts customary to its genre but also a tad bit underwhelming compared to the hype that has surrounded it.

Hereditary is engrossing and at the same time unsettling. It gives you a few intense jolts customary to its genre but other than that it is also a tad bit underwhelming compared to the hype that has surrounded it. Altogether, it fails to leave a lasting impact, the haunting kind that films like Raat, Kaun, the Devil's Backbone, and the Blair Witch Project have had on us. And that's despite a lot of things working in Hereditary's favor--first and foremost, its setting and the characters.

An isolated house in the woods seems like an ideal setting to unveil the players and the action, which comprises of a dysfunctional family with troubled past and rocky present. The characters are plagued by misunderstandings, distrust, and the trauma of the death of loved ones. Some of them seem to be invested in weird and mysterious habits. The drama is built around their gradual unraveling.  Each character also seems to be marked by some convoluted layers of internal as well as external conflict. And that's somewhat heartbreaking. Because the conflicted state makes each one uniquely vulnerable and in-turn gullible to the supernatural. And whenever their vulnerability comes to the fore, the filmmaker strums the horror chords really intensely, giving you thrilling jolts.

However, there comes a time when the supernatural completely takes over, and that's where this otherwise carefully assembled macabre dish loses its flavour. The occulted conspiracy and its aftermath does not really convince. It does not seem plausible because there is so less of it that is otherwise exposed that whatever of it is revealed eventually, doesn't seem relatable. Moreover, it waters down all the empathy we had garnered for the characters. Thus making the efforts of the director in character build-up seem to go waste. And that's sad because what could have been a disturbingly haunting story is then just reduced to a series of thrills at the cost of somebody's misfortune. 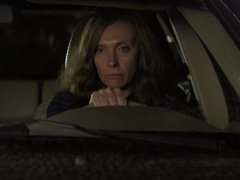 Nevertheless, Hereditary is a good watch for its characters, both how they have been written by the makers and presented by the actors. It's a commendably detailed piece of work, just that it takes a self-destructive turn, almost akin to the miniaturist in the film, who at one point just destroys everything that she's created.