Hercules begins and ends soon enough for it to be tolerable. Dwayne Johnson in the title roles is easy on the eyes, even if he's no Brando when it comes to the acting department. Just make sure you don't take the film too seriously.

Here's the thing - I'm unable to take Dwayne 'The Rock' Johnson seriously when I watch him on the big screen; and I'm sure loads of people who've known him from his WWE days feel quite the same.

Despite his sizeable fan following (which explains why the film opened quite well at the BO) and that he has tried hard to vary his choice of roles, one can't slide away the fact that owing to his muscular physique and affable screen presence, there are only certain kinds of roles he is chosen for, and he's about the same in all of them.

Brett Ratner's take on Greek mythology's Hercules is adapted from a graphic novel, and truth be told, Dwayne Johnson sure suits the part. He looks almost superhuman, his sinews appearing capable enough to pull off some of the feats shown in the film. 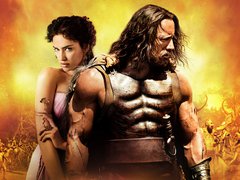 But, all said and done, Hercules is nothing more than VFX-heavy, testosterone-fuelled Hollywood sameness; their version of Kick, if you will.

Oh, but there is actually a semblance of a plot in this film. Hercules, now in exile and a mercenary for hire, is brought in to defend the kingdom of Thrace from a mysterious invader. Things get murky, however, even as Hercules battles his own demons.

Luckily enough, it doesn't seem like either Rayner or Johnson were taking this film too seriously, at least for the most. There's a bit of humour, loads of action and even more of Johnson playing to the gallery. The portions where it does seem like they were taking themselves seriously are, unsurprisingly, the weakest portions of the film.

Mercifully, the film is brisk, and it has at least one twist that flags your interest when you begin to feel the monotony set in. And there's some decently executed close combat action, in addition to the grand battle scenes. Not the gorgeous, uber-stylish kind from 300, but more of the rugged, believable kind.

The trick to not getting bored with a film like Hercules, then, is to play along with the lead actor and director, as they dish out a passable film. Don't expect too much, and Hercules at least won't make you regret watching it.