A refreshing idea that outweighs flaws.

Every once in a while; you come across a film that promises to be something, yet turns out to be entirely different. Happy Journey falls in such a category, but thankfully in a pleasant way. Its trailer tries to be very straightforward. The film, rather, deals with a journey of self-discovery, filled with complexities. It not only surpasses the expectations set by its trailer, but also manages to surprise you every now and then. It won’t be an overstatement if I call this as an achievement; considering the fact that this film is not free of conventionalism.

After forgettable Aiyyaa, Sachin Kundalkar brings you a heart-warming tale of two siblings. Niranjan (played impeccably by Atul Kulkarni), when he was just a kid, was sent to Dubai to financially support his family. As a result, he hardly met his sister Janaki over the years. They meet again in unusual circumstances and set off on an extraordinary journey of life.

Just like many other films of its genre, Happy Journey chooses the path of a physical journey. But what makes this film so unique is that it’s more of an emotional journey-. The writer-director makes you laugh even in an utterly serious situation and leaves you speechless when you least expect it. He strikes a perfect balance of situational humour and emotional bond with ease. This actually tells you the level of efforts that went behind the film’s writing. 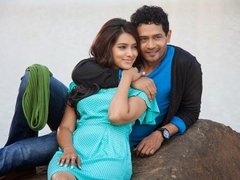 Self-discovery films usually land up making melodramatic or philosophical statements. This story strongly avoids it, and rightfully so. Kundalkar understands his protagonists’ world very well. He doesn’t let the focus slip away. Although Pallavi Subhash’s Goan accent initially gets a little hard to adjust to, she does it brilliantly. Secondary characters and a few flimsy moments, however, expose the director's vulnerability. It is undeniably regrettable.

Another prominent aspect of this refreshingly beautiful story is the coming-of-age relationship between a brother and his sister. I don’t remember a sister being so convincingly bold, especially in a Marathi film. Priya Bapat delightfully lives up to her role. Shalmali Kholgade’s soulful lullaby – Aakash Jhale, adds a heart-rending layer to her character.

Happy Journey looks gorgeous, yet its cinematic beauty remains evident only in parts. Nevertheless, the film is such a joyful experience that you can’t afford not to go on its journey.

Yay! Thumbs Up, by Mind The News

Well, even Marathi film makers are catching on to the 2014 prefix of "Happy". After Happy New Year, and Happy Ending, the happy journey begins :-)

very nice tailor,expecting that movie will be super doper hit

Saw the review after watching the movie...well written and gives a factual picture of the movie. Atul Kulkarni has acted well...so has priya bapat. Pallavis role is limited but she is adequate for the character...Overall good film and a good review...