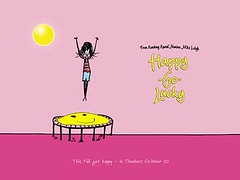 You get caught in the web of Happy Go Lucky with the second scene itself. In it, Poppy, who plays the lead, finds out that her bicycle has been stolen. “Oh, no, I didn't even get a chance to say goodbye”, she says, in retaliation, and walks away with a smile. That’s Poppy for you, a Happy Go Lucky, cheerful woman. You are instantly drawn to her, and wonder how she stays so optimistic. Watch the film for a 2-hour course on how to believe good things exist.

Oh how I lashed out at reviews that conveniently resorted to clichéd lines like, “feel good film”. I never understood it, and always thought there were better ways to describe a film. But like they say, Karma is a b****.

A while ago, I randomly picked up British director Mike Leigh’s film, Happy Go Lucky on the recommendation of a friend. With Sally Hawkins in the lead (of Woody Allen’s Cassandra’s Dream fame), it seemed like a promising film about a jarringly positive and optimistic protagonist, Poppy. Lo and behold, my first thought was, “Wow, what a feel good film!” Sigh, such is life.

Happy Go Lucky struck me because the film is just that – it’s not plot heavy at all. It’s just a film about a woman in her early thirties who lives an independent single life in London and is positive about most things. Simple? Double yes and very much endearing.

It’s a harder role to play than say, Desdemona from Othello. She must be happy, cheerful, positive at all times in the film, as if the sun rose from within her body. She sifts through her job as an elementary teacher and not surprisingly she’s a delight with children. She shares a very comfortable relationship with her cynical roommate Zoe, and we are forced to see her life through the extremely cheerful glasses she thrusts in front of our eyes.

The relevance of her character however comes through most once she starts taking driving lessons from Scott (Eddie Marson), a bitter, antisocial, conspiracy-spitting, absolute contrast to Poppy. It’s in their encounters that you truly enjoy the film, in its stripped down form.

When you hear their conversations – him ranting about how everything is wrong with the world and her asking him to relax and live a little – you understand the dynamics of human identity. The credit of this mostly goes to Mike Leigh, for being able to show you different viewpoints in such a colorful way.

The DVD of Happy Go Lucky includes a commentary from Mike Leigh, an 18-minute making-of featurette of the driving lesson scenes with Scott and Poppy. It’s a hilarious watch for the jokes and behind the scene commentary that Sally Hawkins provides - makes you see a witty side of her in reality. It also includes a 27-minute interview with Mike Leigh where he talks about the characters, and who he envisioned to play to role of Poppy.

While the film progresses you see Poppy go through some difficult relationships, and situations. And she does get reduced to silence and contemplation every now and then, but the idea of the film is to be able to let us ponder over our little complaints about insignificant issues. Alternatively, we have Poppy, who wears a grin in every scene and never loses hope.

I know it’s easier portrayed on film than done, but to make a feel-good (gah!) film that can make you believe that you should adopt a refreshed perspective on life is not easy. It’s not a simple road; this optimism. Infact, it’s rather brave to make a film about it, at the risk of being criticized for being ignorant, unreal and the works.

Speaks volumes about Mike Leigh’s own insight into human perspectives and how they are manifested. Inspite of the depressing moments of the film (it has a few), it emerges almost as a guide book. The kind that is trying to tell you, “Have you ever really lost anything by being an optimist?”