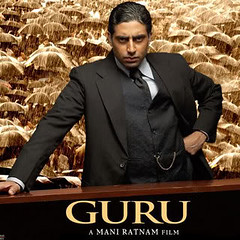 You are not going to get good-looking people oozing with style when you set out to watch this one. On the contrary, there are some scenes in which Abhishek Bachchan (Guru) looks border-line ugly. What you will get though is some outstanding performances. True, the anti-climatic end disappoints. But, fortunately, it’s the end; you have already enjoyed two hours of an overall fine product.

In Hindi cinema, a lot of the credit goes to the director when almost all the actors give great performances. This is, arguably, one of the finest performances Abhishek Bachchan has given. Many people who were struggling in the 70s and 80s will identify with Guru’s ambitions, and how he is pulled down by most people around him. The audience grows with the character…and so does his belly. The success of many movies, in this day and age, depends a lot on “cute dimples” and “wow! What muscles!”. It takes tremendous courage for a leading star to gain so much weight and get rid of the “sexy stubble” because the character needs it. Remember that's not make-up, that is actual flab, which he will have to lose soon enough.

Mithun Chakraborty makes you wish that he had acted like this in his times. R. Mahadevan looks extremely comfortable in the shoes of a journalist and Vidya Balan moves you to tears even though her character has had just 4-5 scenes to develop. The only actor that sticks out with a mediocre performance was Aishwarya Rai. All she needed to do was to dance and look pretty. Though she looks her usual dainty self, somehow her dance had a very “1-2-3-change” feel. The very little acting she needed to do, came across as mechanical.

Guru does not have an earth-shattering story, which is what makes the movie look real. But, it does have a few glaring loopholes with gaps in the plot and thus leaves the audience with questions. E.g., the audience is not told the exact manner in which Guru succeeds. Abhishek and Aishwarya switch in and out of the Gujrati accent and the lack of continuity is obvious. Also, cinematic liberty has been taken while handling technical medical issues of certain characters. All of which could have been forgiven had the climax had impact.

It is a shame that a director of this caliber could not resist evoking the demon of melodrama in the last twenty minutes. The whole treatment of the climax looks very out-of-place and surreal. Nevertheless, the outstanding cinematography, the very believable dialogues, the foot-tapping music, and of course the outstanding performances make Guru worth a visit to the cinema halls.

Thumbs up, by Naresh Kumar Deoshi, Apun Ka Choice : ...For the first time, ‘Guru’ offers something to write about chemistry between Abhishek and Aishwarya... full review

Thumbs up, by Deep, Deep's Home : ...Everything is just on the right place and very well balanced... full review

Thumbs up, by Taran Adarsh, IndiaFM : ...Put your hands together for one of the most courageous attempts on the Hindi screen... full review

Thumbs up, by R. Krishna, J.A.M : ...Mani Ratnam is like the Australian team. Both generate a lot of hype; pundits declare that success is implicit. Yet the public, deep within its heart, wants them to make a mistake. It adds masala to life, innit? But both behave exactly as expected of them - they deliver a winning performance... full review

Thumbs up, by Hemant Shivakumar, Joie De Vivre : ...So many instances in the film remind us of ourselves... full review

Thumbs up, by Murphy, Murphy's Movie Reviews : ...Even if you have never heard of Ambani … you can still appreciate GURU for its terrific cast and its strong direction and script.... full review

Thumbs up, by George, Pacem In Terris : ...Mani has a unique way of portraying relationships on screen. Be it husband-wife, father-children or friends, all relationships he films are so real and unique... full review

So-So, by Raja Sen, Rediff : ... The film stops a few inches short of being a biopic, but the director bestows his character, Guru Kant Desai, with enough depth to make him feel as flesh-and-blood as you or me.... full review

So-So, by Nikhat Kazmi, Times of India : ...he suddenly cowers in the end and creates a hero out a man who justifies every fraud in the name of public good... full review

Thumbs down, by Mysorean, Mysorean : ...A typical rags to riches story is what we all knew it was about. But then with Mani Ratnam wielding the microphone you expected better stuff... full review

Want to Watch, by Juli

Guru (Abhishek Bachchan) is an ambitious village-boy who is academically challenged but has the business acumen that would make the Tatas and the Birlas run behind him for tips. Sujata (Aishwarya Rai) is the supporting woman by his side. Initially, Guru is pulled down by almost everyone around him, but he is determined to succeed financially. What does a penniless, uneducated villager do to turn into a business tycoon? Visit theaters to find out…

Thank you Saum!! Have you seen the movie yet? Any other feedback on the features of my blog are welcome.

There have been very mixed reactions to the movie. You are right - such movies are very dependent on how they end and they did mess up the story by the climax. Also, as the review points out Aishwarya's dance was mechanical. I must say you have a very pretty looking servant girl, though.

Abhishek did imitate his father, but not through the movie. He sounded like Amitabh mostly in the last scene and just two other lines post interval. I thought that was very intentional. I did not put it in the review, to keep that as a surprise for my readers. Did not want my readers to see the whole movie trying to look for Amitabh in Abhishek.

Keep the feedback coming. Thanks!

Himanshu, I did post a reply to your comment, but for some reason, it is not showing up now. Anyway, I did check your website and liked what you have there.

Thanks for visiting and come again!

ravikiran, the feedback I have had so far has asked me to write shorter reviews :-). Anyway, in my reviews, I try and point out what has been done well or what has not been done well. Whatever is ordinary is left out. Somehow, I see no point in saying just, "Songs were alright, photography is okay". I am working on providing more details in the "story" (for want of a better word) section which is linked from the main review.

Thanks for your feedback! Keep it coming!

Thanks for stopping by Amit! Yes, Abhishek has done a great job. But, like many other movies some people have hated it and others have loved it.

Somehow, I did not find the movie inspirational, but if it has worked for some people in the right direction, cool! Personally, I would like it if more of us could use this attitude to change the system rather than flow with it.

i think guru is great wid all the pashion and stress he wins the compition of his life i
i really liked the acting og abishek in this flim its juss gr8888888 and ash oh my god she
is really a preety woman but they are my favorite.......
i love u both muahhhhhhhh

I respect both your points of view. You are entitled to like or dislike the movie/actors/movie crew, etc.

However, I request you all to keep from making personal attacks here. Thank you.

Ti is a great movie , i liked it very much . The role of ash & abishek is great.

various thing to learn about business & struggling to win for life

its a good one and ar rahman rocks

congratulation for this beautiful movie

Suman has given this movie a So-So. Suman has posted 135 comments and has rated 125 movies. See Suman's page for more details.