Gulabi Gang, a documentary by Nishtha Jain on the women's organization of the same name, highlights the sheer depth of the problem that women face, in the interiors of India. As we get acquainted with the organization and its charismatic leader Sampat Pal, the film also inspires us to stand for a change.

Women are ill-treated, disrespected and discriminated against the world over. But in the rural heartland of India, this problem exists at a whole different level. A woman is considered worthless, a burden, a being whose existence is divided into two truths - either uphold 'family honour' or die.

How hard must it be, then, to stand up and fight for the cause of women in a society like this? Sampat Pal, the woman behind Gulabi Gang - an organization that has gone on to receive international recognition - is a shining example of a woman choosing to empower herself and others like her, because society doesn't deem her equal to men.

Nishtha Jain's documentary on Sampat Pal and her organization is an eye-opening piece of work. It brings into focus what we've only heard or read about so far - just how truly helpless a woman can be in the interiors of India. Yet, it also serves as an inspiration, not just to women like those we see in the film, but to all of us. It reminds us that standing for a just cause needs courage and vision. 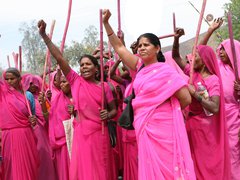 Sampat Pal anchors the film, as we follow her around while she holds public gatherings, recruitment drives and personally delves into the burning and subsequent death of a young woman. The film looks at the last of those in great detail, almost with the pensive inquisitiveness of a murder mystery, before we realize that this is just one of the myriad frustrating tales of the life of a woman being taken for granted.

Despite the hope the film gives, however, there is also the sense of what a mountain this battle of changing societal mindset is. A majority of the women themselves believe that a woman doesn't have the option of choosing to live her life the way she wants; they still believe that a woman who has fallen in love has besmirched the family's honour. You know the problem is serious when even a Gulabi Gang member of many years still feels the same.

Sampat Pal has a powerful, charismatic presence. With a sprinkling of light moments, she ensures that the film maintains a brisk pace throughout, bringing us face to face with a bunch of people who are victims of the malaise that eats our society from within, as well as those who dare to stand up for change.

Each face in the film has character. The sight of the army of pink, trooping away for a cause with lathis in their hands; dangerously treading on the toes of the law but doing it with the weight of conviction against all odds; Gulabi Gang has an intriguing story that must be known.