A thick plot that throws in surprises but ends the usual way – blah. An overwhelming sense of wanting to send a social message, even if understandable, doesn't help the cause.

Guddu Rangeela carries the weight of being a “message” film while the thriller elements had it going for the film quite well. It has been a while since I have seen a Hindi film that corners the protagonists and the antagonist in turns, well enough to make you worry/be happy. Unfortunately, this doesn't stay through the end and Guddu Rangeela becomes like any other Hindi film.

I understand the issue of honor killing is an important one and cannot have enough awareness in the hope that something is done about it soon. In fact, it is such a serious issue that maybe it is impossible to write a story about it without coming across heavily as trying to say something other than just a story. That then, becomes jarring after a while.

It doesn't help that except for the few unexpected twists in the film, the writing lets you down. At many points, the film seems like it is dragging with a song or a joke added. Almost as if it knows it has gotten too serious and needs to lighten up. This in turn looks as forced as it is. 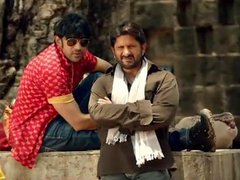 Also, while the attempt is to keep the look and feel of the film authentic, a story like this would never have happened in real life. It is not even about the over-simplistic narrative. It is one of those films that asks you not to think too much.

The accents too are overtly rural and inconsistent. It felt like the actors slipped into the dialect when they remembered or were reminded to do so, else it slipped by. The actors all do alright. Nothing too great is asked of them and none is delivered. Even so, Ronit Roy shines. He is one villain who gives me the shivers, even if it is the first time he is on screen in the film – invariably he is playing a character who you have to be wary of – ruthless.

A heinous villain and a few smart plot twists though aren't good enough to take you to the theater, though, right?

Thumbs up, by Meena Iyer, Times of India : ...Kapoor uses his guile in tackling the regressive Khap issue without getting preachy; he shows us that even in Namo's Swach Bharat, we still practice barbarianism. The film works, albeit on some level, because of its gritty writing. What could have genuinely raised the bar though, is a slicker pace, additional gloss and superstar charisma.... full review

Thumbs up, by IANS, Zee News : ...Big surprises come in small packages, and ‘Guddu Rangeela’ is easily one of the best ones in the first half of this year. Watch this one and treat yourself to a good film.... full review

So-So, by Anna MM Vetticad, annavetticadgoes2themovies : ...All complaints about Guddu Rangeela though are overshadowed by what’s worth recommending in it. Even when the film flounders, Arshad and Amit remain immensely watchable. Rangeela and Guddu never fail to elicit laughs or tug at the heart strings although, as the title track tells us, “Dono pakke ddheet hain / Aansu peete neat hain…” Such likeable rascals, those two!... full review

So-So, by Naresh Kumar Deoshi, Apun Ka Choice : ...Funny, irreverent, volatile, layered and mined with twists, 'Guddu Rangeela' could’ve been a hell of a romp had it not been for the botched denouement. Worth a watch... full review

So-So, Bollywood Hungama : ...On the whole, GUDDU RANGEELA is quite 'colourless' and offers nothing new.... full review

So-So, by Megha, Daily Bhaskar : ...The narrative is not linear and there are interesting though quite unjustified twists and turns in the scenarios. The intercutting allows for some guile and keeps interest going but it also makes you feel cheated. It’s as though Kapoor started off on one note and ended it on a completely different one altogether. The runtime is slim and befitting -so not much to complain there. Also the experience is pleasant …but not exactly perfect!... full review

So-So, by Smita Vyas Kumar, Desi Martini : ...A well paced movie which could have been more enjoyable if it had stuck to being a comedy... full review

So-So, by Nupur Barua, fullhyd.com : ...Some controversy and court cases still surround the movie, but now that it is released, we suggest you take a look at it. Especially if you love Arshad Warsi or Ronit Roy, or both.... full review

So-So, by Martin D'Souza, Glamsham.com : ...Aditi Rao Hydari has a limited scope in which she excels while Shreeswara packs a punch in her cameo. GUDDU RANGEELA is entertaining no doubt, but lacks that special Kapoor touch! ... full review

So-So, by Surabhi Redkar, koimoi : ...Guddu Rangeela‘s quirky dialogues do not make up for its overly commercial plot. The film loses its meaning thanks to a dragging second half. ... full review

So-So, by Shubha Shetty-Saha, MiD DAY : ...Arshad Warsi puts in a decent effort, but he’s saddled with a role where he’s grossly miscast as a young bridegroom on the run. Amit Sadh is sincere. There is a spark of chemistry between Hydari and Sadh, only if it wasn’t nipped in the bud by cheesy lines. Ronit Roy is brilliant; only if he had a better character sketch he could have taken this film a notch above. ... full review

So-So, by Divya Solgama, MoviezADDA : ...Well, this movie has a good first half, decent music and enjoyable performances by its lead actors. It's only due to the slow narrative part, weak climax and a bit weak screenplay in the second half of the film, the movie ends up being mixed shades of dramedy, which had the full potential to become colourfully good.... full review

So-So, by Raja Sen, Rediff : ...The ingredients are all there and there are times it’s all good and rollicking, but a lot of it seems slapped hurriedly together. The fact that Guddu and Rangeela are a couple of weary dogsbodies who, according to their theme song, 'drink down their own tears, neat' is never shown to us, only told. Still, it’s a decent ride.... full review

So-So, by Sonia Chopra, Sify Movies : ...The film might have seemed an interesting, ambitious, black-humoured take on crime in the menacing hinterlands. But what we get is a watered-down version of the above. If you must watch it, look out for the few interesting moments, within the largely insipid, colourless film.... full review

So-So, by VISHAL MENON, The Hindu : ...The director is often compared to Rajkumar Hirani in his comic treatment of heavy-duty social subjects, but in his attempt to infuse seriousness into comedy, he’s ended up making a film with an identity crisis.... full review

Thumbs down, by Bobby Sing, Bobby Talks Cinema.com : ...verall, this is neither GUDDU (a Shah Rukh Khan dud), nor RANGEELA (a Aamir Khan hit). This lies somewhere between them sliding more towards GUDDU with a message that fails to reach the masses due to a routine script. Still the film might perform better in the smaller centers as compared to the metros due to its local feel of the subject.... full review

Thumbs down, by Suparna Sharma, Deccan Chronicle : ...A review of Guddu Rangeela in its own tone and style would simply say, with a smilie: GR is neither rangeela, nor very guddu-guddu. And for this the satisfied team of Subhash Kapoor and Arshad Warsi are to blame.... full review

Thumbs down, by Ameet Bhuvan, Desi Martini : ...Could have been so much better... full review

Thumbs down, by Rachit Gupta, Filmfare : ...The one reason Guddu Rangeela avoids embarrassment is its performances. The actors really do save this film. Whether it's the comedy by the supporting cast or the dramatic turns of the leads, the acting keeps the spark alive. Needless to say, Subhash Kapoor's film is well-made. But it's also severely flawed. His films are usually noticed for their writing and that's exactly where Guddu Rangeela falls short.... full review

Thumbs down, by Tanul Thakur, FirstPost : ...Guddu and Rangeela, for instance, slip easily out of many threatening situations without any real trouble. Rangeela’s love interest breaks into a speech lecturing the Khap Panchayats about their rotten system... full review

Thumbs down, by Mihir Fadnavis, Hindustan Times : ...There's a graceless attempt at 'women's empowerment' towards the end. All it does is makes one wish the film had just stuck to delivering harmless entertainment.... full review

Thumbs down, by Rajeev Masand, IBN Live : ...Guddu Rangeela has flashes of the originality we saw in Kapoor's earlier films Jolly LLB and particularly Phas Gaye Re Obama. But it's weighed down by a lousy script that squanders all potential. ... full review

Thumbs down, by Ananya Bhattacharya, india today : ...In all, Guddu Rangeela works in parts. Disjointed fragments of the film stand out instead of the whole story. In trying to pack in too much of suspense and drama (melodrama, at certain points), Subhash Kapoor leaves the viewer dissatisfied. Watch it if you have to, for the chemistry between the two male leads.... full review

Thumbs down, by Uday Bhatia, Live Mint : ...The camerawork by Jamie Fowlds is flashy and impressive; he seems particularly fond of aerial shots and brings a jumpy energy to some of the action scenes. As for Warsi, he doesn’t embarrass himself (he rarely does), but the film doesn’t tap either his comic skills or his shaggy charm, and ends up with very little to watch.... full review

Thumbs down, by Jaidev Hemmady, Movie Talkies : ...The music is quite average as are the action scenes. Unfortunately, with all the drama and the powerful and controversial subject, the story does not quite touch you... full review

Thumbs down, by Rahul Desai, Upper Stall : ...Directors, who write their films alone from scratch, tend to be very stubborn about their vision being realized without compromise. They even tend to edit and score it mentally while writing, always thinking a step ahead. I don’t know how much of that is true with Subhash Kapoor. Guddu Rangeela may not exactly be his passion project—more like a lazy transition phase—but he could have at least injected it with some passion. For our sake.... full review

tiwarisac: Guddu Rangeela.. don't go by the name. a good one to watch fr it's Khap panchayat sequences .

StopHonourKill: Guddu Rangeela: The revenge of the oddballs: Laced with earthy humour and driven by revenge, it is an entertainer… http://t.co/hb23ous2HZ

sidkakspeaks: Guddu Rangeela has some improbable twists but still manages to engage thanks to 2 powerful performances by Arshad Warsi &amp; Ronit Roy..

MuthuKrish24: Guddu Rangeela, a Refreshing Must Watch: "The film is bolstered by a slew of wonderful character actors who deliver… http://t.co/65TTtRCupD

ajeetpanigrahi: Guddu Rangeela, a good one.

JudeFelixTenywa: Film review: Guddu Rangeela muddles the message: The only thing worse than a movie with no social message is a... http://ywzr.a.boysofts.com/5eMo

Implosive_yash: My Views on #GudduRangeela : Subhash Kapoor’s weakest movie, writing falters with too many sub-plots. http://filmi-world.blogspot.in/2015/07/movie-analysis-guddu-rangeela.html

Bhayankur: They wrote the Haryanvi dialogues right for Guddu Rangeela. The delivery was really bad mostly though.

amitdirector: Guddu Rangeela, what a waste of time!

Nay! Thumbs Down, by hint filmleri

The name Subhash Kapoor definitely raises expectations but then again, every movie is not a Jolly LLB. Nevertheless hoping for the best for Guddu Rangeela.

Anuj has given this movie a Want to Watch. Anuj has posted 1145 comments and has rated 126 movies. See Anuj's page for more details.
hint filmleri