Guardians of the Galaxy Vol. 2

Guardians of the Galaxy Vol. 2 was amazing fun. It had all the jokes you wanted, and more. It had Drax’s stupid laugh. It had Chris Pratt being Chris Pratt, and best of all: It had Baby Groot. A wonderful plot, and full of great visuals, it’s perfect to watch in the theatres.

Guardians of the Galaxy Vol. 2 is a fun, and action-packed movie that wants to be tense. The only reason it’s not tense is because up until now, all the heroes in the Marvel Cinematic Universe (MCU) are practically indestructible. However, this tiny detail does not stop the movie from being an absolute blast. The movie is very much like the first installment in the sense that the jokes are all extremely funny, and not slap-stick, fart and poop jokes. This movie will certainly make you laugh out loud starting from an amused chuckle to hysterical shrieks of laughter.

However story-wise, It’s not like the first movie. The story is very different from anything in the MCU, and I loved that. It’s original and funny at the same time. The director (James Gunn) once again shows that he can make a comedy with heart, and action at the same time. When Peter Quill (Chris Pratt) and his friends, the Guardians of the Galaxy, meet with Quill’s father, Ego (Kurt Russel), they are taken to a planet owned by him, but Gamora (Zoe Saldana) feels something is wrong. With the theme of family at its heart, the story is about the difference between a Father and a Dad.

That part of the film seems extremely cliché, but it shows us the what it means to be of family. Not just a group of friends who have been together for a long enough time to basically be siblings like most movies, but a group of friends that are constantly fighting with each other, everybody wanting their own way. Anyone who’s been a sibling knows of that fight about who gets to control the T.V. remote. Guardians of the Galaxy is basically that, only it's a spaceship instead of a television. 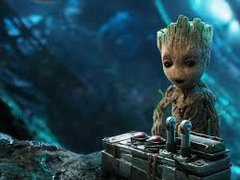 The visuals are outstanding. James Gunn made the deep, vast expanse of Space colourful, which properly describes the tone of the movie as our heroes go through a very dark storyline telling jokes all the way.

All the performances are brilliant. The jokes are told at exactly the right moments and in exactly the right manner. Drax (Dave Bautista) repeatedly did an extremely loud, goofy laugh, that made my day. The one other performance I would like to emphasize is Vin Diesel's as Baby Groot. If you've watched his other movies, you'd know that Vin Diesel has a gravelly, growling voice, which he uses for Groot in the first Guardians of the Galaxy movie perfectly. However, Baby Groot has a high-pitched, baby voice, and I was surprised as to how well it worked out for the movie.

You have to watch it of course, but here's something more to look forward to. Stick around until the very end of the credits. Do not leave the theater (or turn off the DVD) until the screen goes black. There are a handful post-credit scenes.