Guardians of the Galaxy

There's a chance you haven't heard of Star-Lord, Gamora, Drax, Rocket and Groot before; and if you indeed haven't, then prepare for a crazy outing at the cinemas, with James Gunn's Guardians of the Galaxy. You'll root for these guys like you've never done before.

There is something so exciting and intriguingly gargantuan about the thought of the shared cinematic universe that Kevin Feige and his team at Marvel Studios bring to us every year. It almost seems like an alternate reality, one worth surrendering to.

So far, we've been exposed to the top rung of the Marvel line-up, and they've mostly been fun, and have rarely, if ever, been completely disappointing. With James Gunn's Guardians of the Galaxy, we're introduced to a ragtag bunch of obscure Marvel characters, which was always going to be a risky proposition for the studio.

Yet, what is undoubtedly the first of an exciting series of films, does what few expected of it - it is easily the most fun Marvel film since The Avengers. 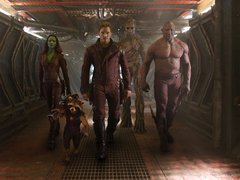 A franchise that could just be the definitive 'Space Western' of this generation, Guardians is thrilling, exciting, inspiring and funny, all in equal measure. The characters are, for want of a better word, a bunch of losers. Individually, their primary concerns are about money or survival. In the larger scheme of things, these concerns seem almost banal. Yet, when these motley characters get together, they become the unlikely eponymous group from the title.

More importantly, when they come together, they just seem to have smashing good fun, which rubs off on to the audience. So utterly beautiful it is, the fact that despite the film being set in what feels like the coldest reaches of outer space, our heroes ooze warmth when they're with each other. Not that they're always on friendly terms - but then as they get to know each other better, we get to know them better.

Peter Quill, who likes calling himself Star-Lord even if no one else does; the mysterious and slinky assassin Gamora; Rocket the talking raccoon; Groot the humanoid tree; and the sinewy beast Drax; there really couldn't have been a more diverse set of characters thrown into the mix. Their zaniness is perhaps their biggest strength - no one in their right minds would ever take this lot seriously.

The plot, like every Marvel film really, is about an evil being, hunting for something that can help him gain power. Here, it's Ronan and Thanos. (The latter, if you remember, made the briefest of appearances in the mid-closing credits scene of The Avengers.) Even though our heroes never quite seem to wrap their heads around it, they are drawn into a bid to foil these evil designs.

Yes, there are the impressive set pieces. Yes, the CG and VFX in the film are top notch. But the film primarily works because it is a buddy movie. Our characters are hilarious, and theirs is a coming-of-age tale, with awkward righteousness guiding them in their goal. The dialogues are spontaneously top-notch, and the film has the most dissonant soundtrack one could imagine for a film of this genre, but one that works because of sheer nostalgia. Peter Quill is the only human character in the entire film, so he's obviously the only one for whom music works like magic - evoking memories of a world gone by.

Chris Pratt as Quill has a rakish charm about him. Zoe Saldana is fine as Gamora, and it's great to see Dave Bautista actually hold his own as Drax. Perhaps not a victim of a strong previous image like Dwayne Johnson, it is much easier to accept Bautista as an actor. But the most laughs are provided by Rocket and Groot, who are voiced by Bradley Cooper and Vin Diesel respectively. I've personally always been fascinated by the character of Thanos, so it was good to see Josh Brolin bring him to performance-captured life.

Guardians is easily the best studio offering of the summer, and it is a worthy addition to the Marvel line up. Things are only going to get bigger from here, because clearly, they have at least some percentage of a plan.

Yay! Thumbs Up, by actfaqs0