If you’ve loved Wes Anderson’s previous work and you go in with the highest of expectations, there’s still virtually no chance that this, his latest film will not match them. As gorgeous as ever, as zany as ever, The Grand Budapest Hotel is another proud entrant into the Anderson oeuvre.

One always approaches a Wes Anderson film with trepidation. There are expectations, yes; but there are also those lingering fears: Will the bubble burst? Will the new world that you’re about to enter enchant like the previous one he created? Will he finally cross the thin line that his indulgent attention to seemingly pointless detail treads? But then, I suppose that’s the hallmark of a true visionary – that once you’re inside the cinema and the lights dim, everything else fades away, and you’re sucked in.

The Grand Budapest Hotel is one of the most gorgeous films you can hope to see on the big screen. Beautifully staged, meticulously crafted frames that blend into each other like clockwork (each more captivating than the other), a universe of its own with enticingly flawed characters that inhabit it; all the staple Anderson tropes are there. Yet, he just seems to get better with each film.

Set in three different time periods, the longest of which is in pre-World War II Europe, The Grand Budapest Hotel is essentially a caper film – it has robbery, murder, jailbreak, mystery, love, brotherhoods, wills and heirs and everything else that can glue one to their seat. And with the Anderson flourish, it becomes an experience all its own. 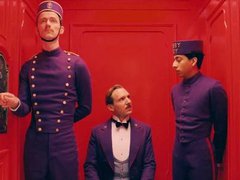 Ralph Fiennes plays Gustave, a concierge at the titular hotel – a man gifted with words, women and a natural magnetic charm that makes him a leader. Looking at him with wide-eyed awe is an oddly named bell boy Zero. It is their escapades that propel the film, as they battle the likes of a deadly assassin and the Anderson reimagining of the Nazi SS – the ZZ – and we watch a story within a story, gobsmacked at the sheer beauty and craft on display.

There’s also the subtle humour laced through the film, as characters stop in the middle of the tensest of situations to ponder on something unnecessary (but never irrelevant). In fact, Anderson’s penchant for humour is quite unparalleled, as long as you’re only looking for the slightest of smiles to remain plastered on your face through the length of the film.

But even in his crazed other-world where characters are the kind you’ve never seen before, they’re always written beautifully, rock-solid to the last ‘d’. You never once feel that a character behaves in any way that seems out of place for them – and there are plenty of loonies to keep you interested at all times.

Even the sinister – almost heartless - aspects of the plot race along merrily with unabashed glee. Here is a filmmaker who can make the pointless murder of a cat seem just a wee bit ticklish. In fact, the manner in which morality is effortlessly reduced to nothing more than a point of view is one of the most interesting aspects of the film, once you’ve left it behind and are letting the experience sink in.

The icing, then, is the cast of the film. While Anderson’s staples like Owen Wilson, Bill Murray, Edward Norton, Adrien Brody and the likes make appearances big and small – and each of them is a delight – the film belongs to Ralph Fiennes and young Tony Revolori who plays Zero. Their timing and spontaneity is impeccable, and they bounce off each other like crazy balls. Special mention must also be made of Willem Defoe’s terrifyingly hilarious look in the film – he plays Jopling, the assassin mentioned earlier.

Wes Anderson is one of those rare filmmakers whose every indulgence you’re willing to forgive, simply because of the loving detail he infuses into his frames, shots, scenes and characters. The Grand Budapest Hotel is yet another feather in his colourful and doubtlessly centre-aligned hat.