If you can get past the 527 cringes in the first 5 minutes and some more in the next hour, the whodunnit is engaging with some decent performances, only asking you to make room for 1029 predictable squirms in the last 10 minutes. (Available on Disney+Hotstar)

I didn’t think I could finish watching the film. Talented actors like Vicky Kaushal, Bhumi Pednekar, and Kiara Advani give the phrase, over-the-top, a run for its money within the first few minutes. The first line of the film itself is the most boring platitude given to Mumbai. The voiceover is so-so annoying. But then, I knew I wanted to write this piece. For that, I had to watch that film. I crossed my fingers, took a deep breath, and kept my fingers from pressing the “close window” button. Also, couldn’t let go of the feeling that these actors must have picked this script for a reason.

The last ten minutes wrap the suspense off with the perpetrator explaining how he did it blow-by-blow only to show off. u.g.g.g.h.h.

The good news is that it does get better. The plot warms up beyond its slapsticky, wannabe-pulpy first half. The loudness settles down. The performances sober up. You start taking your palms off your eyes from this mode 🫣*. And you even begin to get interested.

Here the thriller begins. This bunch of grey characters get into a tangle of deceit, trying to outwit each other. The annoying caricatures of a henpecked husband, raunchy girlfriend, etc. make way for situations that begin to engage. The performances aren’t good enough to make you forget that it’s Vicky Kaushal or Kiara Advani or Bhumi Pednekar or Amol Wagh, or Renuka Shahane. But, they are decent enough to make you admire the effort they have put in and the range they emote. From yelling at each other, they all start talking to each other and even listening! The writing also incorporates some sly digs at current event issues like appreciation of the country’s cleanliness drive in a dirty public toilet and black money presented in Rs 2000 currency notes.

Of course, you know bad news is coming. You get about 30-45 good minutes, with an acceptable number of lines and situations that make you flinch. Especially considering how you started off. And you are back to maybe fewer shudders but more predictable narration. The last ten minutes wrap the suspense off with the perpetrator explaining how he did it blow-by-blow only to show off. u.g.g.g.h.h.

Having endured it, I cannot stop wondering what prompted those decisions in writing and execution. Did it really sound funny or cool? It felt like they were going for a spoof-of-a-B-grade-film feel. But did they think they could make a spoof look better than the target of their humour? If they weren’t going for that texture, what was that? Why was that? 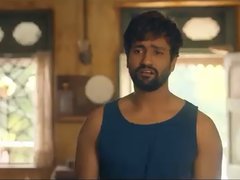 Thumbs up, by Subhash K Jha, Bolly Spice : ...Those who are in it for unquestioning fun, this film delivers. For those who watch films for serious mayhem, wait for the next Anurag Kashyap film.... full review

Thumbs up, by Manik Sharma, FirstPost : ...There is a running joke in Govinda Naam Mera where the hyphenated identity of Govinda is often recognised as Govind. “Woh birth certificate mein galti hogya tha,” Kaushal tells a judge, and then some others, repeatedly in a film that in essence harks back to the days of the actor who last embodied madness, chic and exaggeration with such consummate ease. He was of course known as Govinda. This is probably an inexact tribute, but the fact that the film is set under the canopy of the film industry, makes it all the more resolute and relevant against the tertiary walls of access and privilege. That is of course, a deeper, more determined reading of a film that is content, and evidently adept at being about nothing in particular. Other than of course, fun.... full review

Thumbs up, by Shubham Kulkarni, koimoi : ...Govinda Naam Mera is a harmless absurd comedy that doesn’t take itself seriously but is also clever. You need to watch this for Vicky Kaushal and his range.... full review

Thumbs up, by Sameer Salunkhe, The Telegraph : ...The best way to enjoy this film is to watch it with a clean slate, without trying to intellectualise everything you see. It’s not a ‘leave your brains at home’ comedy, for sure. (You’ll watch it on OTT, so where will you leave your brains anyway?) Govinda Naam Mera works because it is aware of the world it has created. Every character is more eccentric than the other. Every situation is more bizarre than the other. It’s a mad, mad, mad world with enough twists, turns and laughs to last you the entire runtime.... full review

Thumbs up, by Taru B Masand, Times Now : ...If you love comedy and thriller, then Vicky Kaushal, Kiara Advani, and Bhumi Pednekar's Govinda Naam Mera should be on your watchlist for the upcoming weekend. It is a family entertainer and a perfect pick for a movie night. Despite the slow build-up, the film emerges as a winner with its comic timings, a cameo by Ranbir Kapoor, brilliant climax, and just a perfect cast!... full review

Thumbs up, by Archika Khurana, Times of India : ...Right from Vicky and Kiara shaking a leg to the track Pappi Jhappi to donning matching outfits, everything reminds you of the madness and quirks of the 90s comedies. Govinda Naam Mera is definite crowd-pleaser that entertains with ample laughter, confusion and comedy.... full review

So-So, by Rohit Bhatnagar, Free Press Journal : ...Overall, Govinda Naam Mera is a trippy laugh riot with a series of surprising events, but still it is only a one-time watch.... full review

So-So, by Nitin jain, Glamsham.com : ...Lately, filmmakers have been trying to dish out variety in entertainment and the Indian audience finally opening-up to content that is not their regular, but with Govinda Naam Mera the audience will get to revisit a masala comedy loaded with twists and turns, a tadka of murder making it a quirky thriller, the film keeps you hooked until the end. Govinda Naam Mera streaming on OTT will prove to be a decent dinner table entertainer.... full review

So-So, by Parina Taneja, India TV : ...Govinda Naam Mera, starring Vicky Kaushal, Kiara Advani and Bhumi Pednekar, is not just about comedy but is loaded with many twists and turns which makes it a quirky thriller. Although it becomes pretty predictable once the puzzle pieces start to come together, the film keeps you hooked until the end. A decent and entertaining watch for the weekend!... full review

So-So, by Nandini Ramnath, Scroll.in : ...Amey Wagh is a good foil to Vicky Kaushal, who is great form as the cuckolded Govinda. Kaushal’s fundamental nice-guy image and proven willingness to go with the flow hold him, and the film, in good stead as it wobbles dangerously and then sinks with the same sure-footedness with which the real-life Govinda made his screen moves.... full review

So-So, by Pratikshya Mishra, The Quint : ...But alas, all the fun and laughter (and there is some in there) isn't enough to save the film - it'd make for a good one-time watch with friends.... full review

Thumbs down, by Deepanjana Pal, Film Companion : ...Pednekar is the only actor who consistently extracts something entertaining out of Govinda naam mera’s mediocre script. Her sharp- tougued Gauri is very much a caricature of the domineering housewife, but pendenekar’s performance makes her funny and adds some of the nuance that the writing lacks Kaushal shows flashes of good comic timing, but struggles to make us care for Govinda. It doesn’t help that he has little chemistry with either Advani of Pednekar. That said Kaushal and the rest of the cast deserved better than what the storyline of Govinda Naam Mera affords them.... full review

Thumbs down, by Monika Rawal Kukreja, Hindustan Times : ...That being said, if a song and dance sequence could anyhow compensate, I enjoyed Bijli song, though even in that a precisely two-minute cameo by Ranbir Kapoor steals the show. Watch Govinda Naam Mera if you could sit through brainless a comedy that makes you laugh maybe at a couple of scenes but mostly keeps you confused as to why a story with much potential was treated so badly and half-heartedly.... full review

Thumbs down, by Hiren Kotwani, MiD DAY : ...Songs like Bijli and Pappi jhappi are good fun to watch, but don’t elevate the narrative. Ranbir Kapoor’s cameo in Bijli comes as a surprise, but that’s about it. The last 20-odd minutes are the best part of the movie, but that is too little and much too late to salvage the damage of over an-hour-and-half of a flat storyline and predictable fare.... full review

Thumbs down, by Isha Sharma, NewsBytes : ...his overcrowded film adjusts five characters in a scene that has space for only two; I had to rewind at least twice to fathom when some of them explained their needlessly bewildering puzzles. One can sniff twists from miles away, and by the time the final curtain drew, my patience had already worn thin... full review

Thumbs down, by Himesh Mankad, Pinkvilla : ...Govinda Naam Mera rides on a rather flat narrative where nothing really comes together apart from the final 20 minutes, which has an element of surprise in the twists and turns. The film tries to balance itself by bringing the world of commercial comedy and dark comedy together, but ends up being neither of the two.... full review

Thumbs down, by Sukanya Verma, Rediff : ...Relationships take a backseat when someone of significance suddenly drops dead and Govinda-Suku nervously take charge of things amidst a motley crowd of legal eagles, lenders, brokers, builders, drug dealers and cops hot on their pursuit or haggling them for money.... full review

Thumbs down, by Anuj Kumar, The Hindu : ...There is not a single honest moment in the film that makes you surrender to the manufactured chaos on display. The crazy title promises some electric dance moves and music but there is hardly any current in the score. And, the sting in the tail that Khaitan keeps wrapped up comes long after we had given up on the shallow enterprise with a hollow premise. The natural flair and infectious charm of Vicky and Kiara fail to perk up the proceedings, and even the reliable Shinde and Shahane could not add any depth to the flimsy storyline. In the end, the title remains the only whacky thing about this ungainly chaos.... full review

Thumbs down, by Pooja Birala Jaiswal, The Week : ...Given the title of the film, one is reminded of Govinda, the 90s actor known best for his comedy with which he could effortlessly elevate films revolving around nonsensical plots and over-the-top characters to entertaining affairs. Unfortunately, this movie does not come anywhere close to the comedy movies of the 90s.... full review

Dear Meeta, That was heroic to endure this...

Raj has given this movie a Nay! Thumbs Down(Ugh.. sums it up..!). Raj has posted 99 comments and has rated 67 movies. See Raj's page for more details.