The latest Godzilla reboot, directed by Gareth Edwards, makes for an engaging big screen watch because it harks back to the first ever Godzilla film, including the Japan connection. The film is grim, grand but quite some fun!

Last year, we saw the Jaegers and Kaiju battle it out for big screen giant supremacy, in Guillermo del Toro’s Pacific Rim. While we know how that fun war panned out, perhaps it wouldn’t be wrong to say that Godzilla still remains the grand-daddy of all big screen mega-creatures.

Six decades after Godzilla’s first big screen appearance, maverick director Gareth Edwards gives us a fun retelling of the Godzilla legend; his film is far more fun than the last Hollywood Godzilla film, the 1998 one directed by Roland Emmerich. What makes it fun is the fact that the film is also a strange sort of superhero film; yes, you read that right.

Watch this one right from the first frame, because the cleverly designed opening credits lay the groundwork for the story of the film, before we launch into the real thing. Unexplained earthquakes, a devastated nuclear plant; and things get mysterious as an American engineer in Japan begins fearing that something far more dangerous is the cause for it. 15 years later, the world gets to see just what the cause of the tremors was... 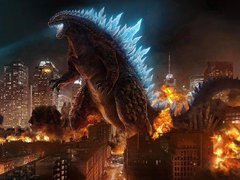 Set initially in Japan before moving to San Francisco for the finale, the film takes its time to build, and one of the best things about the film is that the monsters aren’t overused. They make their appearance late, and are never properly revealed to the audience right through the film. While that automatically conveys a sense of massive scale, it also makes each appearance of every monster an event, making the film almost always interesting, because you don’t quite know what gigantic bit of action is going to take place next.

But what I truly loved about this Godzilla reboot is just how much it draws from ‘monster master’ Ishirô Honda’s 1954 film. (Remember, the dedication in the very last frame of the end credits of Pacific Rim?) When Godzilla made his first appearance in 1954 it was essentially a metaphor for the horrors that Japan faced by being the first victims of a nuclear bomb. Godzilla stood for the ills of nuclear power, and that thought is carried forward in this film, right through to the connection with Japan.

Godzilla’s iconic wail and his hulking shape look better than ever before, and you almost cheer every appearance of his. The film is beautifully shot - very atmospheric and moody. However, it would have ideally been enjoyed best in 2D, because the 3D doesn’t add much, and the glasses obviously make the dark images even darker.

What’s also nice is that the film isn’t merely about monsters and booms. There’s a story and there are characters with a personal stake as well. In fact, a lot of time is actually spent making us invest in these characters, so that we aren’t just rooting for nameless and faceless crowds of people. It unfolds at a leisurely pace initially, but it doesn’t bother you at all, because of its crisp runtime. In fact, it adds nicely to the sense of tension, as you’re waiting for the epic battles that the film is ultimately about.

Strangely enough, with this film, you feel a far more personal connect with Godzilla than you’ve ever felt. And Godzilla reminds you, once again, that heroes come in all shapes and sizes.

Nay! Thumbs Down, by video