The Girl on the Train

Even without the deftness of a thriller, it holds your attention. Yet, it could have been told better.

Would I be saying anything new at all when I say, the book is better – in the way it unfolds and in the nuances you know about the character. So, given that the book is almost always better and you cannot possibly unread a book, I'd say, if you haven't read the book and don't intend to, the movie, The Girl On The Train might just be worth the thrill.

Would I be saying anything new at all when I say, the book is better

You are slowly introduced to two other women and the live they lead. But you don't get to know them too well – what do they think or like. They seem sort-of coincidental to the film. I would have liked to know them better. It is a good thing though that the characters are well-cast.

Emily Blunt (Rachel), Haley Bennett (Megan) and Rebecca Ferguson (Anna) do well with the sketchy character sketches drawn for them. However, it felt like the camera did a lot of their work for them. It shook and held steady to show Rachel's drunk and sober phases. It moved a voyeuristic gaze over Megan to bring her sensuousness to us.

Unfortunately, though the story doesn't take that further. It becomes an episodic narration of one thing after another with a bit of back and forth in the timeline. It might leave you a little disoriented but never disinterested. If only the big reveal came a little smoothly. 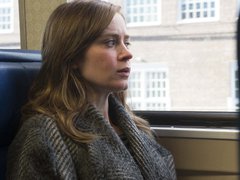 If you haven't guessed already, yes – almost each of those sentences above could end with “unlike in the book”. Even if the book isn't the greatest read there is.

The Girl on the Train - Cast, crew, links

Have read the book and loved every chapter.

Anusha has given this movie a Want to Watch(Have only read the book). Anusha has posted 1 comments and has rated 1 movies. See Anusha's page for more details.