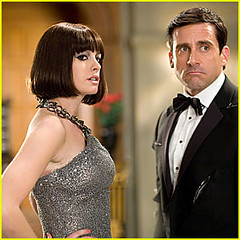 Since this is first time I am guest posting out here I feel I probably should mention that I am extremely shallow. You will learn more as you read.

Given the current fare running in the movie halls the past few months I was hoping for a release that would have me rolling in the aisles. Get Smart does not disappoint. In fact I think I should go back for a second screening since I don't think I did the movie justice with the amount I laughed the first time. There is only so much you can laugh before your sides start protesting.

The movie stars Steve Carell and Anne Hathaway. Two actors who never particularly interested me when I saw their initial movies. I saw Carell first in Evan Almighty. The only thing lower than my opinion of him was my opinion of that movie.

I found Anne Hathaway plain even after the transformation in Princess Diaries because she had weird knees. All dislikes went out of the window with the string of movies that followed showing her in better light (and probably better make up). The loss of puppy fat and her sudden aversion towards clothes probably had a lot to do with my decision as well.

The situation in the movie is not original. Carell's character, Max Smart holds a desk job at an Intelligence Agency and aspires to be a field agent. With typical insensitivity the agency keeps him chained to the desk. A security breach that compromises the identities of all their agents finally gives Max the chance he was waiting for.

The cinematography is by the book. There are no experimentations or any alternative styles that have been adapted. Editing to the untrained eye is pretty smooth and this movie was never meant to have an arty angle. While transitions are pretty smooth, the action sequences might get a viewer to do double takes. Whether it was to save on costs or time or done with a specific purpose I guess we might never know but the high paced, fast take action sequences have been shot on a digital camera as opposed to a film camera that is utilized in the rest of the film. Or it might be just to mask the fact that neither Anne Hathaway nor Steve Carell have done any high flying action roles prior to this film and lacked the proper knowledge of executing them.

What follows, of course, cannot be told without breaching this blog's central theme. Do prepare yourself for outrageous action and stunts. You won't have time to dwell on thinking how unrealistic any of them were since at this point your logic has stopped functioning. That's a good thing. On my hilarity scale it ranks pretty high. Euro Trip, Ice Age 1 & 2; Get Smart definitely follows that list.

This review is by guest reviewer Sumit Jagdale. A photographer by profession, he shoots for the fashion and automotive sector. He considers conceptual art photography to be his favourite as it places the highest degree of control in his hands. He prefers Hollywood fare over the regular Bollywood masala, and knowledge of the technical aspects of film making put a different twist on watching the movie with him. Sumit Jagdale also blogs at http://www.twistedindifference.com/.

Do prepare yourself for outrageous action and stunts. You won’t have time to dwell on thinking how unrealistic any of them were since at this point your logic has stopped functioning. That’s a good thing....

[...] So without further delay and of course without giving the movie away… [...]

Red bubblegum and an exploding shoe at Happening N

[...] of Doom presents an excellent review covering the character development in Get Smart, and Without Giving The Movie Away provides a short review that includes a look at the cinematography used in this [...]