Trust and betrayal; lust, love, and infidelity; kinship and friendship—Gehraaiyaan could have weaved them all well together had it not steadily geared towards becoming bizarre. (Available on Amazon Prime Video)

Even an hour into the film, you know you don’t really know the characters well yet. The extent to which they can go to get what they want seems to be more than the previous sequence. But you are curious, and that is good enough. And then you realise it just might have more to do with you being a patient audience than your attention being held by great writing.

The distance created is neither overcome by top-notch performances nor moving, believable chemistry.

Four seemingly well-developed characters, all made stronger by the actors playing them manage to bore you by being repetitious and going out-of-character eventually. It’s a shame that you cannot root for any of them, even the nice ones, because you are feeling pity, not concern. It doesn’t help that the characters you want to like aren’t really nice people. In fact, the story seems to revolve around the nastiest of them all. It might have worked if the idea was to tell us an anti-hero’s story. But that’s not how it can shape when you are trying to show that you are doing justice to all characters or even the two main leads equally.

Interestingly, you don’t hate them either. In an unconventional way, you want to understand why they are doing what they are doing. So complicated gets their situation that you wonder how these not-nice people will get out of it. And then they try to convince themselves that they have no choice but to cross lines that the audience might or might not be ready for. This push makes Gehraiyaan shuttle between “shocking for the sake of being shocking” and “trying too hard to be different”.

The distance created is neither overcome by top-notch performances nor moving, believable chemistry. There is little hope then for the atmosphere created by the camerawork, music and production design to help the movie recover.

Interestingly, even as I tried to dodge spoilers, the mixed reactions were intriguing. I wondered if it was because of the mismatch between the viewers’ morality and the characters’ choices. Having watched the film, I understand the mild and yet complete dissatisfaction the audience experiences after the film. A rare film that doesn’t have an all-sad-climax yet leaves you gloomy. A not-so-nice rare. 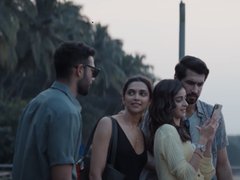 Only recently has it so happened that most of the people I know have seen a film before I have. Me being wary of cinema halls doesn’t help either. Until I get there though, I am enjoying this place where friends and family want me to write about a film because they have watched it. Here’s hoping I won’t get used to it and will catch a film in a theater soon, maybe even next week.

Dear Meetu, Thanks for this nice honest review. I haven't seen the movie and the trailers nor actors interest me to watch it (theatre of OTT).

Raj has given this movie a Not Interested in Watching(Soft-porno, curse-words, shallow characters). Raj has posted 76 comments and has rated 44 movies. See Raj's page for more details.