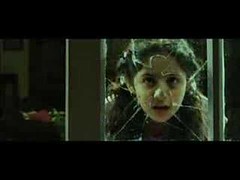 Horror meets a social message to make a disastrous movie

I don't remember the last time someone's strong opinion was shoved so vehemently down my throat using a medium of mass communication. Maybe I was agitated because I have a strong opinion which is diametrically opposite to the one expressed in Gauri - the unborn. But the point is that even if you were anti-abortion, I doubt you would enjoy it. Because it is badly made too.

An otherwise fine actor, Atul Kulkarni, overacts. Rituparna Sengupta's dubbing was so bad and distracting, that it was difficult to focus on her performance. And close-ups of her awfully made-up face didn't help either. So, if you were inclined to shut your ears and eyes every time she's on screen, well...there's not much left.

Baby Rushita has given a decent performance, but I can't help feeling bad for her. In this day and age, where parents mull over introducing adult topics to children at the right age, should a child even be allowed to play the spirit of an unborn child? Let alone lecture and emotionally blackmail adults who choose abortion. (I am not giving the movie away any more than the marketing department, because the movie posters say this in so many words).

Given these factors, it matters little that the camerawork and background score are just about alright for a movie of this genre. On the other hand, the visual effects were pretty lame.

Granted, it is a low budget movie, but then therein lies the creativity, right? To make a presentable product from the limited resources. The least they could do was give the child a lovable character so that the target audience would want to reconsider their decision on abortion. Especially when you are trying to convince people that abortion is evil. People of a nation most of whose problems can be narrowed down to the population explosion.

Thumbs down, by Khalid Mohamed, Hindustan Times : ...Even if you ingnore the regressive outlook of this horror khichdi, there’s nothing much going on here.... full review

Thumbs down, by Gaurav Malani, indiatimes : ...But the idea in itself might not find many buyers with the present day audience. And the few conventional minds who might agree to the idea might not necessarily find the horror genre appealing.... full review

Thumbs down, by Abhijit Mhamunkar, indya.com : ...Little Rushita Pandya, who plays their daughter, proves to be the best of the lot and carries the film on her shoulders well... full review

Thumbs down, by Hanumant Bhansali, Radio Sargam : ...the script is not developed and looks edgy most of the times.... full review

Thumbs down, by Nikhat Kazmi, Times of India : ... Quite sad, because technically the film isn't so bad.... full review

Gauri (Rushita Pandaya) is the spirit of Roshni (Rituparna Sengupta) and Sudeep (Atul Kulkarni)'s aborted child who has possessed the body of their living daughter Shivani (Rushita Pandaya). Gauri wants to avenge her "murder".

The movie as a whole did not work for me.

Thanks, Kiran!! It does help that I really don't know anyone in the industry ;) But, you can say that I am not biased towards people I like or against people I don't like.
Anyway, this movie has no such social impact. It is about abortion, but I don't think a movie like this can get through to a generation, who want to time their kids when they are best ready for them.