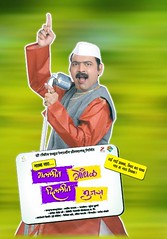 Directionless political satire. Aimed at showcasing different types of corrupt politicians, might have led to an even lower voter turnout.

Though the title sounds absolutely ridiculous it is filled with sarcasm for local politicians. The politicians who exercise control in their constituency only to succumb to the higher powers at the center. This mixed with humor and good dialogues had definite potential for both entertainment and hitting home a point. Instead we have an extremely annoying set of similarly corrupt politicians who seem to be fighting aimlessly.

Then there’s this smart alec Narayan Rao who is supposedly clean-hearted but you are never sure of his true motivations. It is left hanging loose. Vague intentions have a charm of their own but only if it is so intentionally. Ambiguity that seems inadvertent is tasteless and thus very irritating. Who is doing what and why is rather episodic and has no connection with previous incidents.

This chaotic behavior of characters becomes even more abrupt with the anecdotal type of jokes. The satire in the gags is worth a few smiles but does nothing at all to give a semblance of flow from one plot to another. Not to mention that the subplots are very randomly sewn together. And the performances include the usual bunch of sketchy characters having a yell-louder-than-me-if-you-can contest.

Having said all of that there is still an attempt to comment on the sad state of our power-holders. However stereotypical, there’s an attempt to show how disinterested voters and party workers are in the affairs of the country. They need nothing more than a fair-skinned member of the fairer gender perform a folk dance to shift their loyalties.

Yet, ultimately it is a very flat narrative filled to the brim with mayhem and inconsequential sub-plots. The potential that the name of the film has starts and finishes right there.

Oh nice. I haven't seen that one yet. Sometime, on your recommendation :)